Between January 1922 and February 1923, over 100 major and minor labour strikes involving more than 300,000 workers took place nationwide. The national labour movement reached its first climax with the Anyuan Railway Workers’ and Miners’ Strike (安源路礦工人大罷工) and the Jing-Han Railway Workers’ Strike (京漢鐵路工人大罷工). At that time, Mao Zedong (毛澤東), Li Lisan (李立三), and Liu Shaoqi (劉少奇) visited Anyuan frequently to rally the railway workers and miners, establish labour unions, and spearhead a strike in September 1922. The Jing-Han Railway Workers’ Strike in February 1923, another major initiative that took place in regions including Zhengzhou (鄭州) and other regions, ended on a more tragic note: the movement’s leader Lin Xiangqian (林祥謙) and legal counsel Shi Yang (施洋) were both killed, and scores of workers died.

Organising peasant movements was another focus of the CCP’s work. Directed by Li Dazhao (李大釗), the head of CCP’s northern branch, Gong Zhongtao (弓仲韜) established a special communist party branch in Taicheng Village (台城村) of Anping County (安平縣), Hebei Province (河北). It was the CCP’s first rural party branch. The peasant movements also surged in Guangdong (廣東), Hunan (湖南), and other provinces in Southern China. Peng Pai (彭湃), a member of the CCP who came from a landowning family, spearheaded the movement in his hometown in Haifeng (海豐), Guangdong. On New Year’s Day of 1923, he formed the Haifeng County Peasant Association (海豐縣總農會) and was elected president. Under the Association’s coordination, the peasants undertook various protests to withhold grain taxes and campaign for lower rents. Later, Peng helped found the Guangzhou Peasant Movement Training Institute (廣州農民運動講習所) and authored a work titled Report on the Haifeng Peasant Movement (《海豐農民運動》). He was lauded as the “king of the peasant movement” by Mao.

Mao, who came from a prosperous peasant family, rallied the peasants of his hometown in Hunan. In 1925, he wrote an article titled Analysis of the Classes in Chinese Society (《中國社會各階級的分析》). It was followed by the now-famous study titled Report on an Investigation of the Peasant Movement in Hunan (《湖南農民運動考察報告》).

On the left: an early flag of the CCP. Predominantly red in colour, it features the “axe and sickle” symbol; on the right: the CCP’s present-day flag. Mainly in red, the flag features the “hammer and sickle” symbol. Historically, there were several iterations of the party flag. All are predominantly red (the colour of revolution) and highlight the role of the proletariat by featuring the tools of workers (an axe or a hammer) and peasants (a sickle). 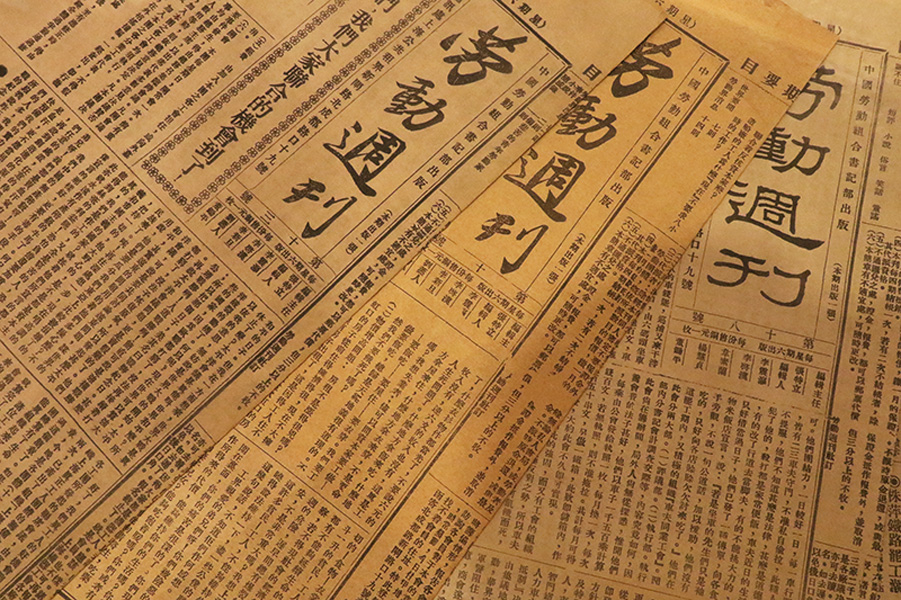 Labour Weekly (《勞動週刊》), the official weekly organ of the National Labour Union Secretariat. The CCP founded the Secretariat in August 1921 to organise and lead labour movements. 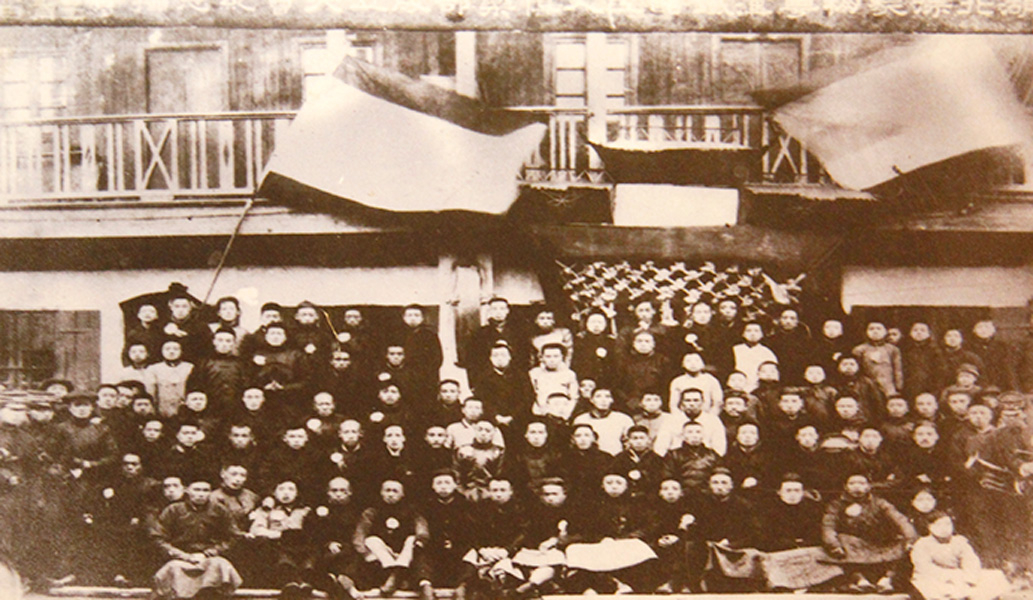 Organising and staging railway worker protests was a key part of the CCP’s early work on labour movements. The photo shows the launch of the Yue-Han Railway Xujiapeng Club (粵漢鐵路徐家棚俱樂部), an initiative spearheaded by the CCP in January 1922. 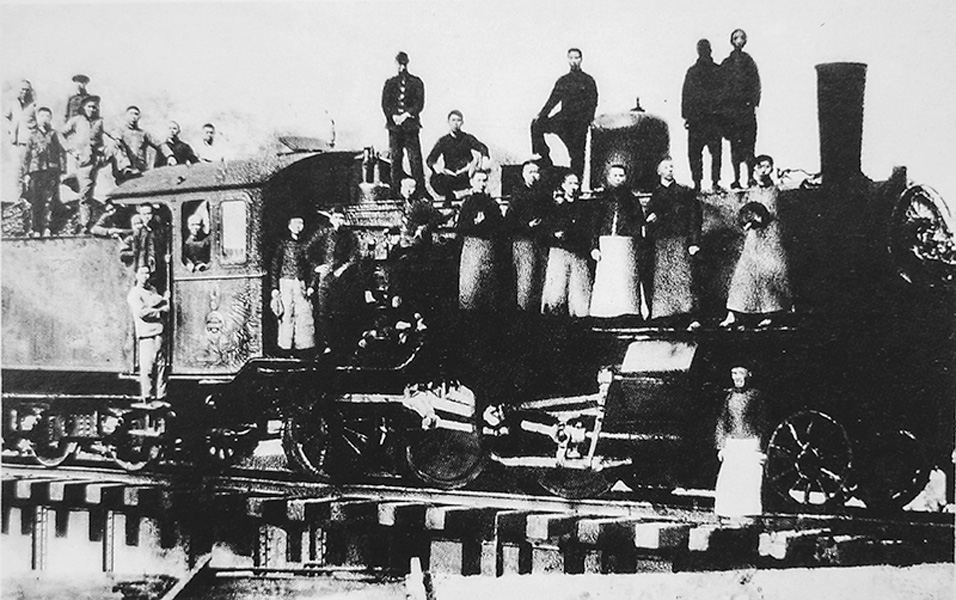 In September 1922, the CCP staged the Anyuan Railway Workers’ and Miners’ Strike in Jiangxi Province (江西). Over 17,000 workers participated in the strike, forcing the railway and mining authorities to accept most of their demands. It was one of the newly established CCP’s successful labour movements. 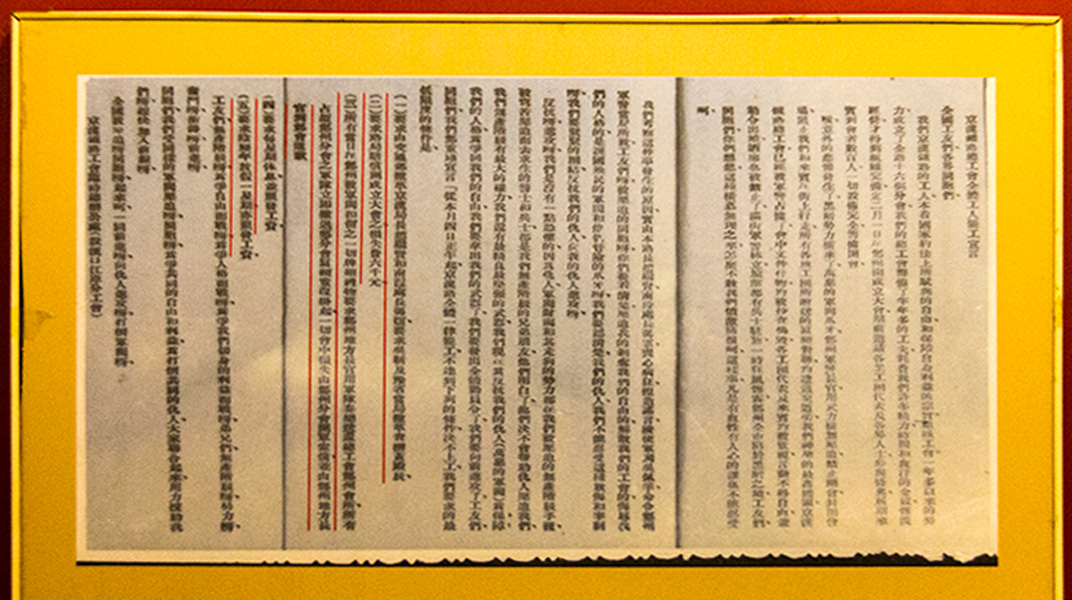 In early February 1923, the CCP staged the Jing-Han Railway Workers’ Strike. Pictured is the strike manifesto.

During the early Republican era, most of the Chinese population were poor peasants. Recognising the peasantry as a huge force for communist revolution, some CCP members began to work closely with rural population to rally peasant movements. Pictured are Peng Pai, a leader of the CCP’s early peasant movements, and his work Report on the Haifeng Peasant Movement published by the Guangdong Province Peasant Association (廣東省農民協會) in 1926.

Two illustrations on the CCP’s work in organising peasant movements in the 1920s. On the left, Peng Pai recounting to the peasants how the landlords and the gentry exploited them and encouraging them to fight; on the right: during the early Republican era, many rural regions were under the control of corrupt officials, local tyrants, and evil gentry. The large number of peasant victims was in the CCP’s favour to rally peasants’ support. 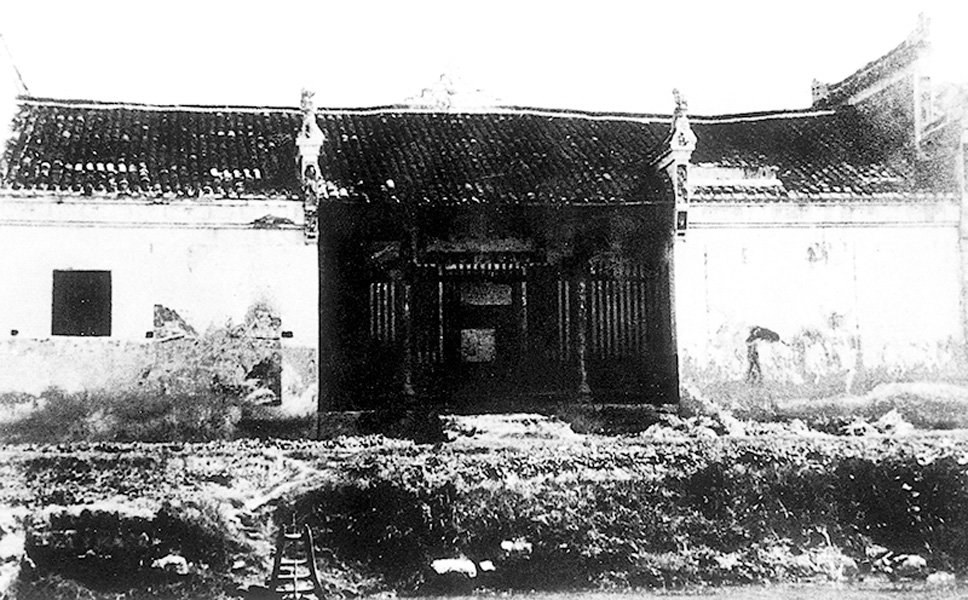 Like Peng Pai, Mao Zedong also saw the peasantry as a revolutionary force. Pictured is the former site of the Associations to Erase Humiliation (雪恥會), a peasant movement group founded by Mao in his hometown of Shaoshan (韶山) in Xiangtan (湘潭), Hunan, in 1925.

On the left: Analysis of the Classes in Chinese Society, an article written by Mao Zedong in 1925. It is an analysis of the economic status, political attitudes, and other attributes of different classes in Chinese society. The peasantry and villages are the key focuses of this analysis. On the right: Report on an Investigation of the Peasant Movement in Hunan, Mao’s famous research findings regarding the peasant movement, was published in 1927.

Between 4 January and 5 February of 1927, Mao Zedong visited various villages in the five counties of Xiangtan, Xiangxiang (湘鄉), Hengshan (衡山), Liling (醴陵), and Changsha (長沙) to learn about their conditions. He travelled a total of some 700 kilometres throughout the study. His findings were officially published in March that year under the title Report on an Investigation of the Peasant Movement in Hunan. The report would be significant to Mao’s strategy for leading his peasant-based revolution in the future.