When was Marxism introduced into China? For a long time, many credited Liang Qichao (梁啟超) with the introduction of Karl Marx’s socialist views in a 1902 issue of the journal New People’s Miscellany (《新民叢報》); Zhu Zhixin (朱執信), a member of the United League (同盟會), also introduced Marx’s doctrines in a 1906 issue of Citizens’ Journal (《民報》).

Recent studies, however, suggest that Marxism was introduced into China as early as 1898 or 1899, when an article on Marxism was translated and published by the British Christian missionary Timothy Richard. However, the spread of Marxism did not gain traction until after the 1917 October Revolution in Russia. In 1918, Li Dazhao (李大釗) published articles including The Victory of the People (《庶民的勝利》) and The Victory of Bolshevism (《布爾什維主義的勝利》) in which he spoke highly of the Russian Revolution. Chen Duxiu (陳獨秀), the chief editor of the journal La Jeunesse (New Youth,《新青年》) and the newspaper supplement of Chenbao (Morning Post,《晨報》), published special Marxist research editions. A growing number of intellectuals began to take to Marxism after the May Fourth Movement (五四運動) in 1919. Meanwhile, the Communist International (also known as Comintern) sent representatives to China on numerous occasions to help its Chinese comrades establish nationwide communist cells.

An illustration showing how children worked in the British coal mine during the Industrial Revolution in the 19th century. The Industrial Revolution began in Britain and later radiated to the rest of Europe. It helped Europe achieve remarkable progress during the 18th and 19th century, yet also brought about problems including the widespread exploitation of labour and widening disparity between the rich and the poor.

Illustrated above: Inside a British coal mine, a child working as a trapper (on the right) was responsible for opening the underground trapdoor so that the thruster who was responsible for pushing a tub full of coal (on the left) could move it through the passage. Children were preferred by the mining industry because the tunnels inside the coal mines were narrow and children could move easier in them. Working in tunnels no more than 50 centimetres high, child thrusters had to push a 400-kilogram coal tub for around six kilometres every day. Trappers, typically young children aged between 5 and 10, spent every day sitting alone in the dark just to open the trapdoors to let the thrusters through and provide ventilation to the mine. These child miners had to work in dangerous environment for more than 10 hours without reasonable pay, safety measures, and welfare provisions. Child labour was used in many other industries as well. The plight of the lower classes in the 19th century, especially the distress of children, are detailed in literary classics such as Charles Dickens’s Oliver Twist and Victor Hugo’s Les Misérables. 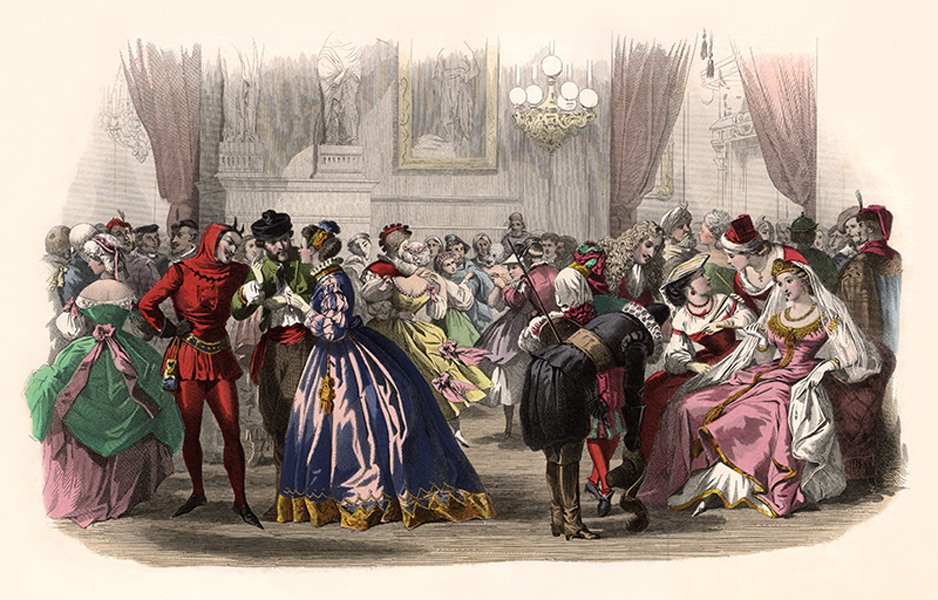 An illustration depicting a lavish banquet of the European upper class in the 19th century. Under the Industrial Revolution, the lives of the rich and the poor were like heaven and hell. Contradictions between the bourgeois and the proletariat grew increasingly acute.

From the left: Das Kapital (in English Capital), Marx, and Engels. Das Kapital, authored by Marx and edited by Engels, was published in 1867. The work offers a comprehensive and in-depth discussion of capital, production, labour, etc. It has a tremendous impact on the course of human history by laying the theoretical foundation of Marxism and the entire communist movement. 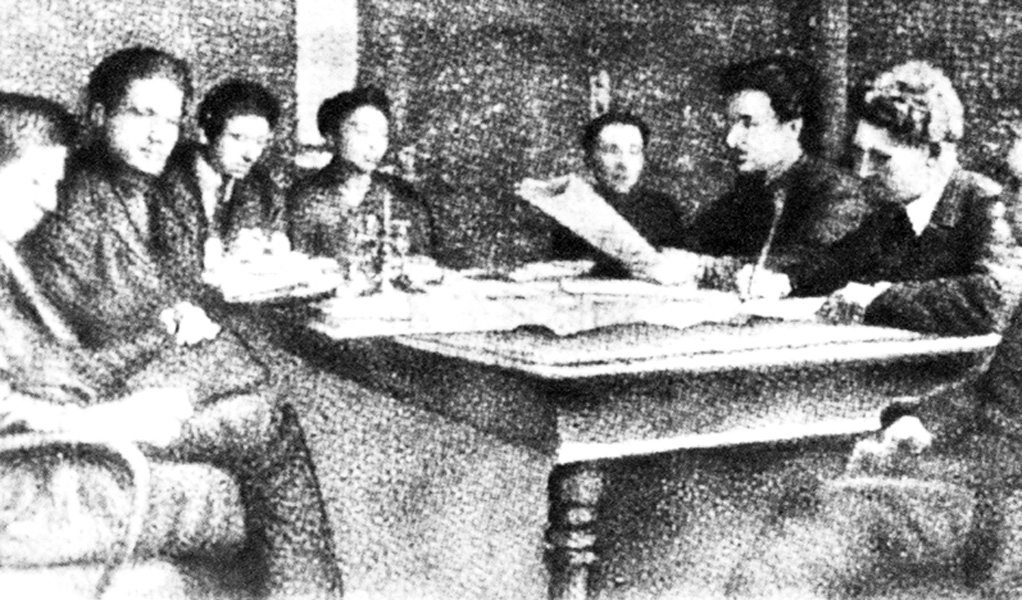 In 1919, Soviet Russia established the Communist International (also known as Comintern) to promote communist revolutions worldwide. Pictured is a group photo taken during a meeting of the Far Eastern Bureau of the Comintern. The second from the right is Grigori Voitinsky. In 1920, the Comintern dispatched Voitinsky to China to meet with prominent Chinese communists such as Li Dazhao and Chen Duxiu. His work accelerated the formation of Marxist research organisations throughout China.

During the period of the New Culture Movement, a growing number of young intellectuals gravitated towards Marxism, and organisations for studying, researching, and propagating Marxism appeared nationwide. One such organisation was the Awakening Society (覺悟社) founded in Tianjin (天津) in 1919. Pictured is a group photo of its members. The first figure from the right in the back row is Zhou Enlai and the third figure from the right in the front row is Deng Yingchao (鄧穎超).

In 1920, Li Dazhao and his associates founded the Society for the Study of Marxist Theory (馬克思學說研究會) in Peking University (北京大學). Pictured is a group photo of some of its members. 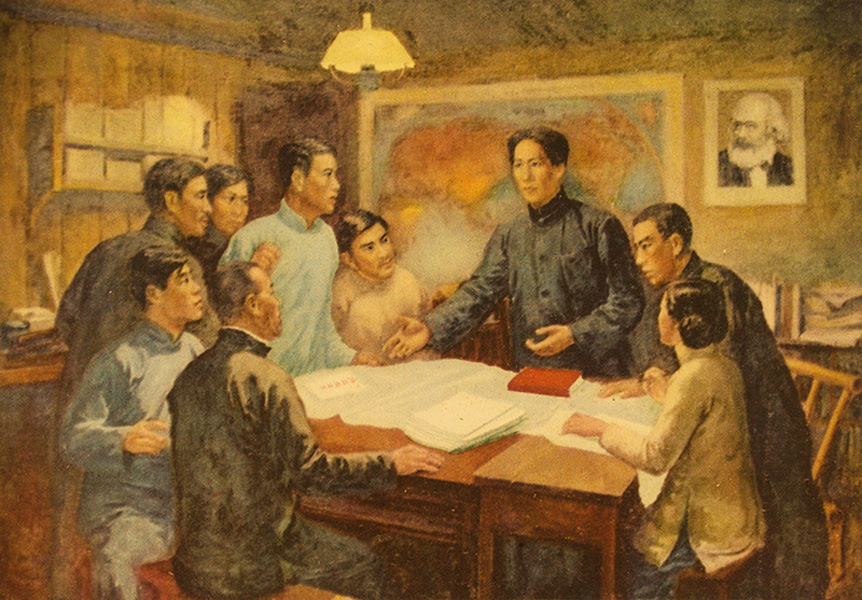 A painting titled Chairman Mao Founding A Marxist Group in Hunan (《毛主席在湖南組建馬克思主義小組》). In 1920, Mao Zedong (third figure from the right) and his associates set up a communist cell in Changsha, Hunan.

The cover of the Workers’ World (《勞動界》) and two illustrations of labourers in the journal. Workers’ World, a Marxist journal, was launched in Shanghai in August 1920. During the period of New Culture Movement, such publications proliferated.

On the left: The Workers (《勞働者》), a Marxist magazine published by the communist cell in Guangdong; in the centre: a page from Guangdong Mass Daily (《廣東群報》), a Marxist newspaper launched in Guangdong. The communist cell in Guangdong adopted it as their official publication in 1921; on the right: presenting itself as a “foreign language society”, the Chinese Socialist Youth League (中國社會主義青年團) organised activities and published recruitment notices in the Shanghai-based newspaper The Republican Daily News (《民國日報》) to expand their membership. As more were exposed to Marxism and the number of communist cells continued to grow, the Chinese Communist Party  (中國共產黨) gradually took shape.

Sources of most photos used in this feature piece: Visual China Group (pictures 2 and 4), Fotoe (pictures 1, 3-10).