Throughout the early years of the Republic, the imperialist powers never stopped coveting and encroaching the Chinese territory. Among them, Russia, Britain, and Japan were the most aggressive.

Ever since it lost the Russo-Japanese War, Russia stepped up its infiltration into Outer Mongolia to make up for its loss of interests in Northeast China. As soon as the 1911 Xinhai Revolution (辛亥革命) broke out, Russia seized the opportunity to incite Outer Mongolia to declare “independence”. For a time, Outer Mongolia teetered between “political independence” and “autonomy” as support from Russia fluctuated with its own regime changes. In 1921, Outer Mongolia finally declared independence. In July 1924, it proclaimed itself the Mongolian People’s Republic and changed its capital name from Urga to Ulaanbaatar. Although the Chinese government at that time did not recognise Mongolia’s independence, it was powerless to stop it. Meanwhile, a race was on between Russia and Britain to cultivate agents and expand their own influence in the Xinjiang (新疆) region.

Besides tampering with Chinese sovereignty in Xinjiang, Britain also actively tried to penetrate Tibet. It even fomented Tibet’s independence from China after the 1911 Revolution. From October 1913 to July 1914, a conference between Britain, China, and Tibet was convened in Simla, northern India. At the conference, Britain proposed dividing Tibet into “Inner Tibet” and “Outer Tibet”. “Inner Tibet” was to be created from Amdo (mostly modern-day Qinghai﹝青海﹞area) and Kham (mostly modern-day eastern Tibet), while the territory south and west of “Inner Tibet” was to be defined as “Outer Tibet”. The plan was for “Inner Tibet” to remain under Chinese jurisdiction and “Outer Tibet” to become autonomous. Although the proposal failed to pass, the British and Tibetan plenipotentiaries met secretly sometime during the convention period and agreed on the eastern section of the Sino-Indian border line on their own. This so-called “McMahon Line” has never been recognised by any Chinese administrations.

Japan went all out to invade Shandong Province (山東) during the early Republican years. In 1914, on the pretext of declaring war on Germany, Japan occupied Qingdao (青島), Shandong, regardless of China’s neutrality. In January 1915, Japan proposed the “Twenty-One Demands” to the Yuan Shikai (袁世凱) government. Besides recognising its inheritance of the German privileges in Shandong, Japan also demanded China to be controlled by it over different affairs including politics, finance, and military. To secure Japanese support, Yuan accepted most of the terms on 9 May. Later, when Duan Qirui (段祺瑞) was in power, he also declared that he would “gladly accept” Japan’s request to inherit the German privileges for Japanese loans. The Shandong Problem later became the fuse of the 1919 May Fourth Movement.

With Russia’s support, the 8th Jebtsundamba Khutuktu proclaimed the establishment of the Bogd Khanate of Mongolia (Great Mongolian State) in Urga, the capital, on 15 February 1912 and assumed the title of Bodg Khaan (“Great Khan”) himself. On 3 November, Jebtsundamba signed the Russo-Mongolian Agreement with Russia, which included the promise of Russia aid Mongolia in training a national army, a prohibition on Chinese military’s presence in Outer Mongolia, a prohibition on Chinese immigration to the area and the granting of privileges to Russia in Outer Mongolia. On 7 June 1915, the Republic of China and Russia signed the Kyakhta Agreement, stipulating that Outer Mongolia as a part of China, and Russia and Outer Mongolia recognising China’s suzerainty. In addition, China would recognise Outer Mongolia’s autonomy. Despite the agreement, Russia continued to bolster its influence in Outer Mongolia. 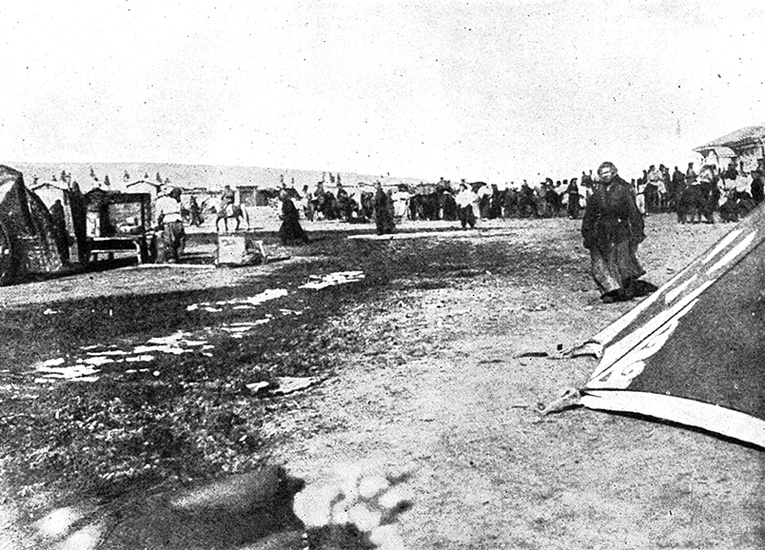 A Republican-era photo of a marketplace in Urga, the capital of Outer Mongolia. Russian incitement contributed to Outer Mongolia’s declaration of independence in 1921. In 1924, it proclaimed itself the Mongolian People’s Republic and renamed the capital Ulaanbaatar. 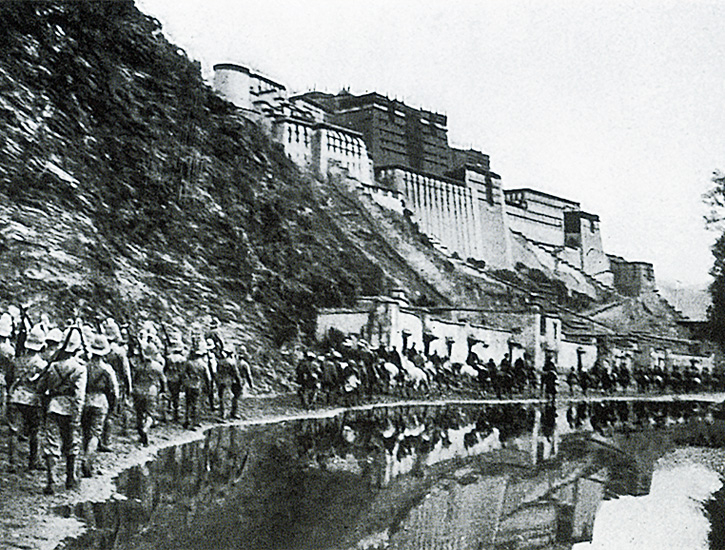 Since the late Qing dynasty, Britain had intensified its expansion of interests in Tibet. Pictured are British troops passing by Potala Palace in Lhasa, Tibet, in August 1904. 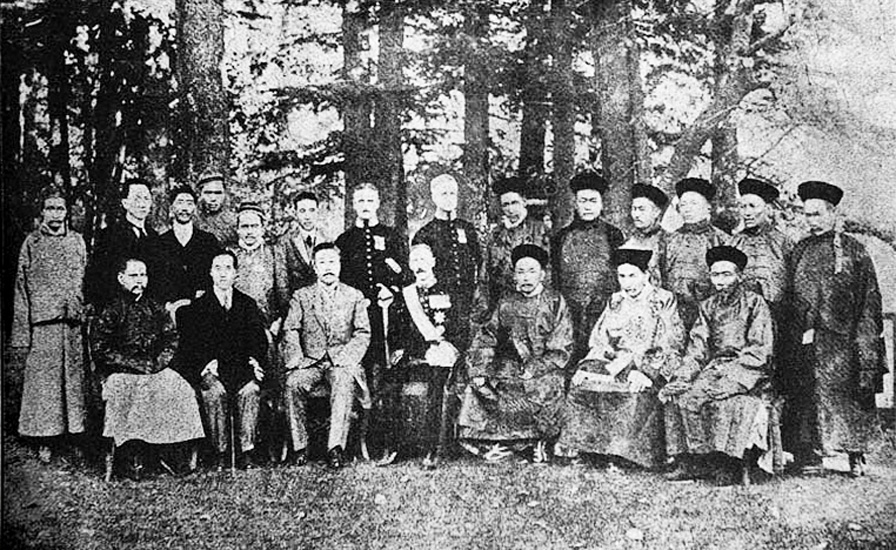 On the left: a photo of the British representative Henry McMahon taken during the 1913-14 Simla Conference; on the right: the drawing of the territorial dispute-generating McMahon Line had far-reaching consequences.

On 24 March 1914, without China’s knowledge, McMahon and the representative of the Tibetan government agreed on a newly drawn border line that lay around 100 kilometres north of the eastern sector of the traditional (albeit non-demarcated) border line between China and India. The border came to be known as the McMahon Line. Over history, not one Chinese administration - from the Beiyang government, the Nanjing Nationalist Government to the People’s Republic of China - has recognised the McMahon Line. The line has led to territorial disputes and even sparked the Sino-Indian Border Conflict in 1962. The border-related issues remain unresolved to this day. 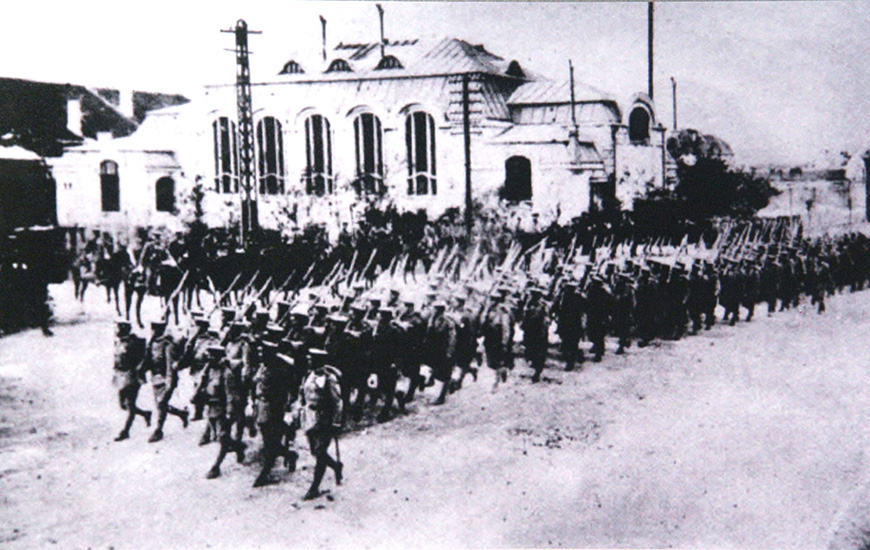 In 1914, Japan entered the First World War. Japanese troops were sent to crush the German forces stationed in Qingdao. At that time, China was neutral in the war. Pictured are Japanese troops marching in Qingdao after capturing it. 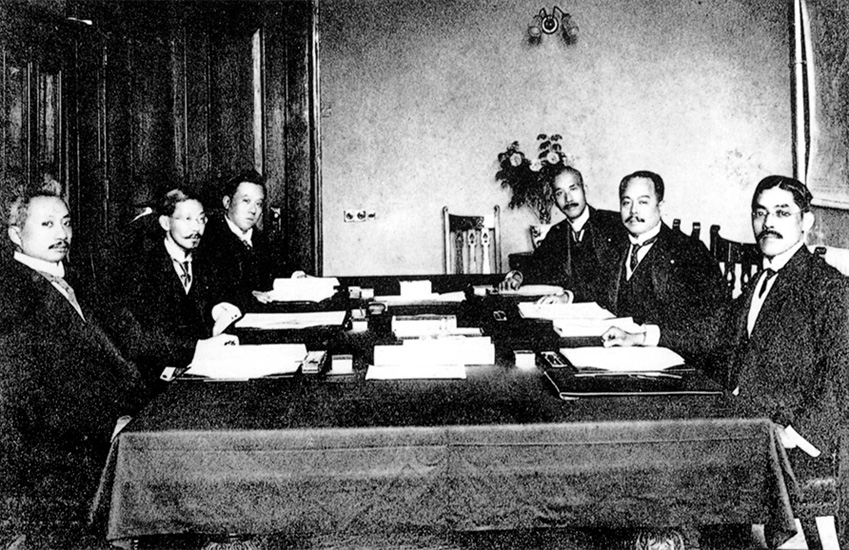 The original text of the “Twenty-One Demands”. In addition to recognising Japanese inheritance of the German privileges in Shandong, China was demanded to grant Japan the control over its political, financial, military and various other affairs. In China, the demands were commented as “a treaty of subjugation”.

The demands in “Twenty-One Demands” were categorised into five groups: the first group (four demands) confirmed Japan’s takeover of the German concessions in Shandong; the second group (seven demands) recognised Japan’s privileges and concessions in southern Manchuria and eastern Inner Mongolia; the third group (two demands) granted Japan joint control of the Han-Ye-Ping Comapny (漢冶萍公司, a company with main businesses of iron ore mining, coal mining, and metallurgy); the fourth group (one demand) barred China from leasing or giving any further coastal or island concessions to foreign powers; and the fifth (seven demands) demanded China to hire Japanese consultants to advise the country on its political, financial, and military affairs, and established joint police forces and arsenals as Sino-Japanese ventures.

On the left: the Japanese media reported that the Duan Qirui administration and the Japanese government reached the Nishihara Loans; on the right: extensive discussion of the Shandong Problem in the Weekly Review (《每週評論》) journal issued on 11 May 1919. In return for providing the loans, the Duan Qirui administration would “gladly accept” the transition of the German privileges in Shandong to Japan. Public discontent over the Shandong Problem later grew into the 1919 May Fourth Movement.

The Nishihara Loans were a series of public and secret loans the Duan Qirui administration signed with the Japanese government between 1917 and 1918. As the transactions were managed by Nishihara Kamezo, a trusted subordinate of the Japanese Prime Minister Terauchi Masatake, they became known as the Nishihara Loans. As for how the loans were used, Guo Tingyi (郭廷以) summed it up in Modern Chinese History (《近代中國史綱》) “… of the over 260 million-yen loans of Japan taken out by Duan Qirui between 1917 and 1918, half were used to repay foreign and domestic debts and most of the rest were spent on the civil war”.