The scramble for concessions refers to the risk China faced in the late 19th century, when the imperialist powers raced to lease Chinese harbours and ports, and scrambled for their own spheres of influence. In fact, the powers had forced China to give up various aspects of national sovereignty since 1840 via the two Opium Wars, the Sino-French War, the First Sino-Japanese War, and numerous unequal treaties foisted upon China. China was relegated to a market for imperialist-manufactured commodities and a supplier of raw materials.

China’s loss of independence and autonomy was evidenced by its land cessions, payment of indemnities, opening of treaty ports, and establishment of foreign concessions. Hong Kong Island and southern Kowloon were ceded to Britain; Taiwan and the islands of Penghu (澎湖) were ceded to Japan; Macao was colonised by Portugal under treaty terms; and some 1.5 million square kilometres of land in north-eastern and north-western China was seized by Tsarist Russia. China’s territorial integrity was heavily damaged.

The opening of treaty ports was in line with the practice of free trade. However, China was forced to do so under the condition that the imperialist powers would have the right to negotiate tariff rates and other privileges, which deprived China of its tariff autonomy.

For concessions, the powers enjoyed administrative autonomy, consular jurisdiction, and the right to freely inhabit their citizens in China. In effect, they were virtually the imperialist powers’ own “states within a state” located on the Chinese soil.

The economic, legal, and diplomatic ramifications went beyond the loss of tariff autonomy, the loss of control over its own customs, and the surrendering of judicial jurisdiction to foreign consuls. The proliferation of foreign banks also placed China’s financial system under the powers’ control. Also, China’s national defence was seriously undermined when foreign vessels were granted the right to freely navigate inland waterways.

By the end of the 19th century, as Western capitalism increasingly assumed the nature of monopoly capitalism, capital export emerged as a new mode of exploitation alongside commodity trade and raw material extraction. The imperialist powers foisted lucrative loans upon China, and to vie with one another for the rights to establish factories, railways, and mining operations there. A mania for “carving up China” emerged as the powers raced to lease the country’s harbours and ports to consolidate their own spheres of influence.

Eventually, the United States proposed an Open Door Policy that would oblige all countries to uphold the principles of equal opportunity in China and share privileges on an equal basis. Locked in a stalemate, the other powers decided to abide by these terms. Although this turn of events spared China the fate of a total partition, the once proud empire was nevertheless reduced to a semi-colony. 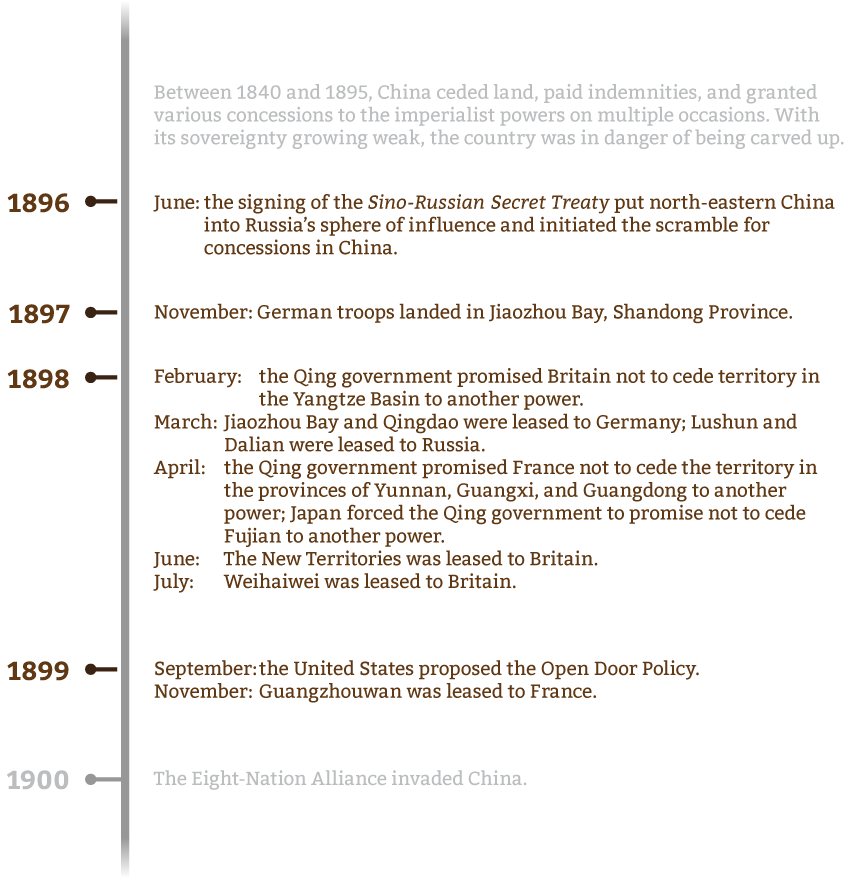