The strength of the Kuomintang of China (KMT, 中國國民黨) and the Chinese Communist Party (CCP, 中國共產黨) reversed on the battlefield after two years of the civil war. The National Army (In December 1947, the National Revolutionary Army﹝NRA﹞was renamed the Republic of China Armed Forces, and was generally called the National Army﹝NA﹞, 國軍﹝Guojun﹞in Chinese) switched from the offensive to the defensive while the People’s Liberation Army (PLA) started to attack. In 1948, the PLA’s field armies spread across the Northwest, Central, East, Northeast, and North China. While the Northwest Field Army (later known as the First Field Army, or the First Field) led by Commander Peng Dehuai (彭德懷) pushed further towards the Northwest, others joined the three major campaigns between September 1948 and January 1949.

(1) The Liaoshen Campaign (or Liaoning-Shenyang Campaign﹝遼瀋戰役﹞): 12 September to 2 November 1948, also known as the West Liaoning Campaign (遼西會戰) or Northeast Campaign. The Soviet force supported the CCP to take over the Northeast when it withdrew. However, the Nationalist Government’s army soon advanced in the area. Multiple engagements took place in Sipingjie (四平街), Jilin Province (吉林). Starting in mid-September 1948, the Northeast Field Army (later known as the Fourth Field Army, or the Fourth Field) with its commander Lin Biao (林彪) and commissar Luo Ronghuan (羅榮桓) attacked the principal force of the NA’s General Suppression Headquarters of Northeast Garrison led by Commander-in-Chief Wei Lihuang (衛立煌). The PLA occupied Jinzhou (錦州), Changchun (長春), Shenyang (瀋陽), and finally the whole Northeast. Wei fled. One of his two deputy commanders-in-chief Zheng Dongguo (鄭洞國) surrendered, while the other one Fan Hanjie (范漢傑), and the Commanding Officer Liao Yaoxiang (廖耀湘) were captured. The PLA wiped out more than 470,000 NA elite forces at a cost of its own 69,000 casualties.

(2) The Huaihai Campaign (淮海戰役): 6 November 1948 to 10 January 1949, also known as the Battle of Xuzhou-Bengbu (徐蚌會戰). The campaign had the Central Plains Field Army (later known as the Second Field Army, or the Second Field) led by Commander Liu Bocheng (劉伯承) and Commissar Deng Xiaoping (鄧小平) joining forces with the East China Field Army (later known as the Third Field Army, or the Third Field) led by Commander Chen Yi (陳毅) and Commissar Su Yu (粟裕). On the opposite side was Liu Zhi (劉峙), the Commander-in-Chief of the General Suppression Headquarters of Xuzhou Garrison, reinforced by Bai Chongxi (白崇禧), the Commander-in-Chief of the General Suppression Headquarters of Central China. Su was the main planner and commander of this operation. The PLA wiped out and reorganised 555,000 NA troops at a cost of its own 134,000 casualties. The NA’s Deputy Commander-in-Chief Du Yuming (杜聿明) and the Regimental Commander Huang Wei (黃維) were captured. Regimental Commanders Huang Baitao (黃伯韜) and Qiu Qingquan (邱清泉) committed suicide and was killed respectively in action.

(3) The Pingjin Campaign (or Beiping-Tianjin Campaign﹝平津戰役﹞): 29 November 1948 to 31 January 1949, also known as the Battle of Beiping-Tianjin- Zhangjiakou (平津張會戰). After the Liaoshen Campaign, Lin led the Northeast Field Army through the Shanhai Pass (山海關) and merged with the North China Field Army (later taken in by the First Field and the Second Field) commanded by Nie Rongzhen (聶榮臻). This PLA force of one million men encircled the half-million NA troops led by Fu Zuoyi (傅作義), the Commander-in-Chief of the General Suppression Headquarters of North China Garrison. The PLA took Tianjin (天津), negotiated the surrender of Fu, and reorganised his half-million NA troops. On 31 January 1949, the PLA entered Beiping (北平, now Beijing﹝北京﹞without a fight. By then, the KMT’s rule in the north Yangtze River (長江) collapsed. The Yangtze River Crossing Campaign and a regime change were around the corner.

Photos from the Liaoshen Campaign in 1948. Left: the NR building fortifications in Changchun, Jilin, when they were besieged by the PLA. On 23 October, the PLA captured Changchun. Right: the PLA crossing the Liao River (遼河) to pursue the NA retreating to Yingkou (營口), Liaoning. On 2 November, the PLA occupied Yingkou.

Photos from the Liaoshen Campaign in 1948. Left: the NA lost over 470,000 men with many officers and soldiers captured in this campaign. Right: the PLA troops celebrating their triumph in Shenyang (瀋陽), Liaoning. The Liaoshen Campaign ended on 2 November when the PLA seized Shenyang. By then, the CCP secured Northeast China. 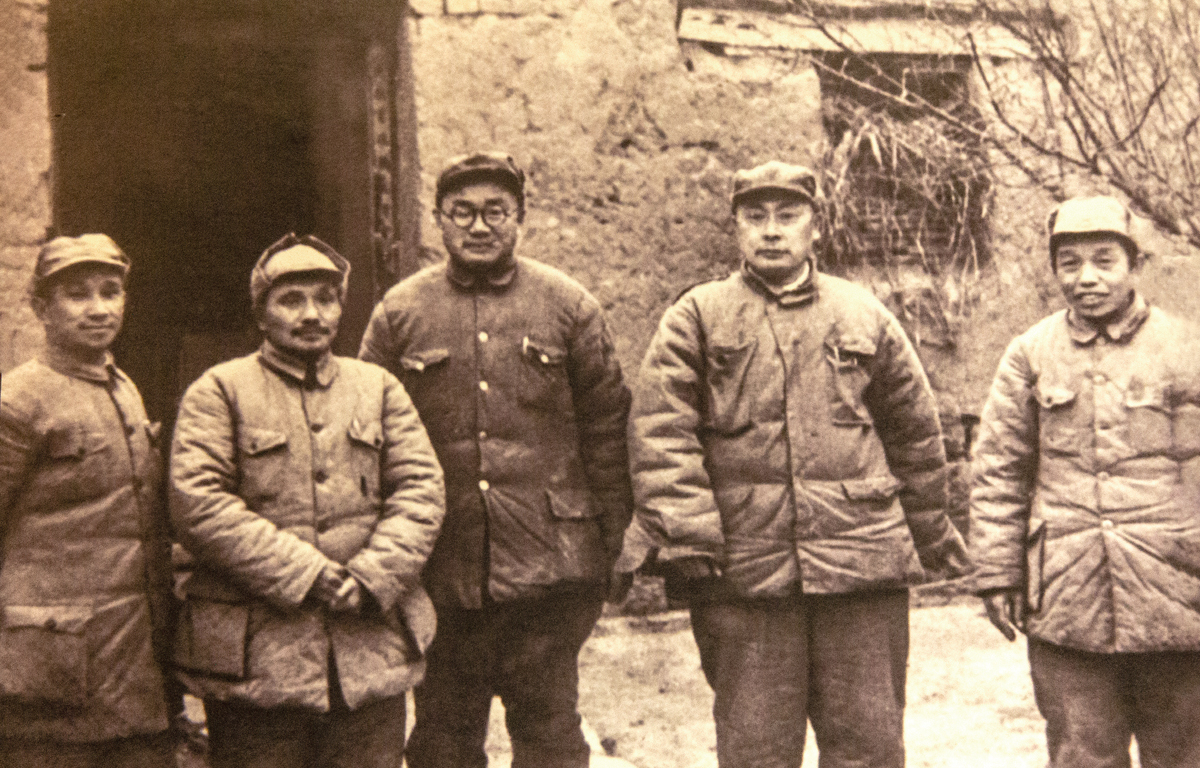 To prepare for the decisive battles in East and Central China, the CCP formed the General Front Committee of the Huaihai Campaign consisting of (left to right) Su Yu, Deng Xiaoping, Liu Bocheng, Chen Yi, and Tan Zhenlin (譚震林) with Deng being the secretary. On 6 November 1948, the Huaihai Campaign broke out.

Photos from the Huaihai Campaign. Left: the NA struggling to maintain its position on the front line. Right: the militia stretcher teams helping the PLA handle confiscated NA weapons. During the campaign, hundreds of thousands of people formed militias at the call of the CCP. They helped the PLA in many aspects including transportation and supplies.

Shortly before the Pingjin Campaign in November 1948, the NA abandoned several significant passes along the Great Wall to strengthen its defence of key cities in the North such as Beiping and Tianjin. The PLA crossed the Great Wall in this opening. Left: the PLA crossing the Great Wall. Right: the PLA occupying the Shanhai Pass and pushing inland.

On 29 November 1948, the Pingjin Campaign broke out. The PLA quickly split and encircled Fu Zuoyi’s 500,000-men division in Xinbao’an Town (新保安) and the cities of Zhangjiakou, Beiping, and Tianjin. On 15 January 1949, the PLA captured Tianjin. Left: the PLA infantry entering downtown Tianjin under the cover of tanks. Right: the PLA attacking the Government’s garrison command in Tianjin.

In January 1949, Fu Zuoyi, the Commander-in-Chief of the General Suppression Headquarters of North China Garrison and the PLA reached an agreement that Fu would surrender, hand over Beiping, and have his 500,000 men incorporated into the PLA. On 31 January 1949, the Pingjin Campaign came to an end when the PLA entered Beiping without meeting any resistance. Left: the NA outside the Beiping city wall waiting to be reorganised into the PLA. Right: the PLA entered Beiping through Zhengyang Gate (正陽門, often referred to as the Front Gate). After the three major campaigns, a regime change in Mainland China was imminent.