After China won the War of Resistance Against Japanese Aggression, conflicts between the Kuomintang of China (KMT, 中國國民黨) and the Chinese Communist Party (CCP, 中國共產黨) intensified as the two sides disagreed on issues regarding Japan’s surrender as well as the control over the Japanese-occupied areas and armaments. However, the people longed for lasting peace. Besides, the United States and the Soviet Union did not want any involvement in a Chinese civil war, so they advocated a negotiated settlement between the two parties. On 28 August 1945, Mao Zedong (毛澤東), the CCP Chairman, and his delegation flew from Yan’an (延安) to Chongqing (重慶) at the invitation of the KMT leader Chiang Kai-shek (蔣介石) for a negotiation. The negotiation, which lasted nearly a month and a half, concluded on 10th October with the Summary of Conversations Between the Government and the Representatives of the Chinese Communist Party, also known as the Double Tenth Agreement. The two parties agreed on a joint peaceful state-building of China and the formation of a political consultative conference, the democratisation of the political system, the nationalisation of the army, and the legalisation of political parties’ equal rights. However, the KMT requested the CCP to reduce its military and submit to the KMT, but the CCP refused to forego its military independence.

After the signing of the Double Tenth Agreement, the United States sent the President’s Special Envoy George C. Marshall to China as a mediator. With his efforts, the two parties reached a ceasefire agreement in January 1946 and established the Executive Headquarters in Beiping (北平, now Beijing﹝北京﹞), which was responsible for the mediation of disputes nationwide. Despite these endeavours, the political consultative conference was fruitless due to the massive difference between the two parties and a full-scale civil war eventually erupted in late June 1946. Soon, Marshall admitted the failure of the mediation and returned to the United States.

Early in the civil war, the KMT’s forces boasted stronger forces and better armaments, and therefore launched a total offensive on the CCP. Later, it targeted the CCP’s strongholds, including Yan’an where the CCP Central Committee was based, and took control there in March 1947. The CCP leaders, including Mao, proactively transferred to north Shaanxi Province (陝西) and other areas from where they continued to command the troops. Starting from the 1947 summer, the CCP People’s Liberation Army (PLA) gained strength and shifted from the defensive to the offensive. Chiang was forced to change the military strategy from all-out defence to targeted defence. From September 1948 to January 1949, the KMT and the CCP engaged in three major campaigns, namely, the Liaoshen Campaign (or Liaoning-Shenyang Campaign, 遼瀋戰役), the Huaihai Campaign (淮海戰役) and the Pingjin Campaign (or Beiping-Tianjin Campaign, 平津戰役). The KMT’s forces were routed in all of them and the KMT lost control over the areas of north Yangtze River (長江).

On top of losses on the front line, the Government-controlled areas were troubled by issues including hyperinflation. To address its deficit, the Government issued the Gold Yuan (金圓券) in 1948, forcing the public to exchange gold and foreign currency for this new currency and resulted in hyperinflation and deteriorating livelihoods. The social and economic collapse led to anti-government student movements and public protests in the Government-controlled areas. The people’s rebellion was a force on its side fighting the KMT alongside the PLA in the eyes of the CCP. In early 1949, the KMT was losing on the front line and struggling in the rear area. Its governance over China was about to end. 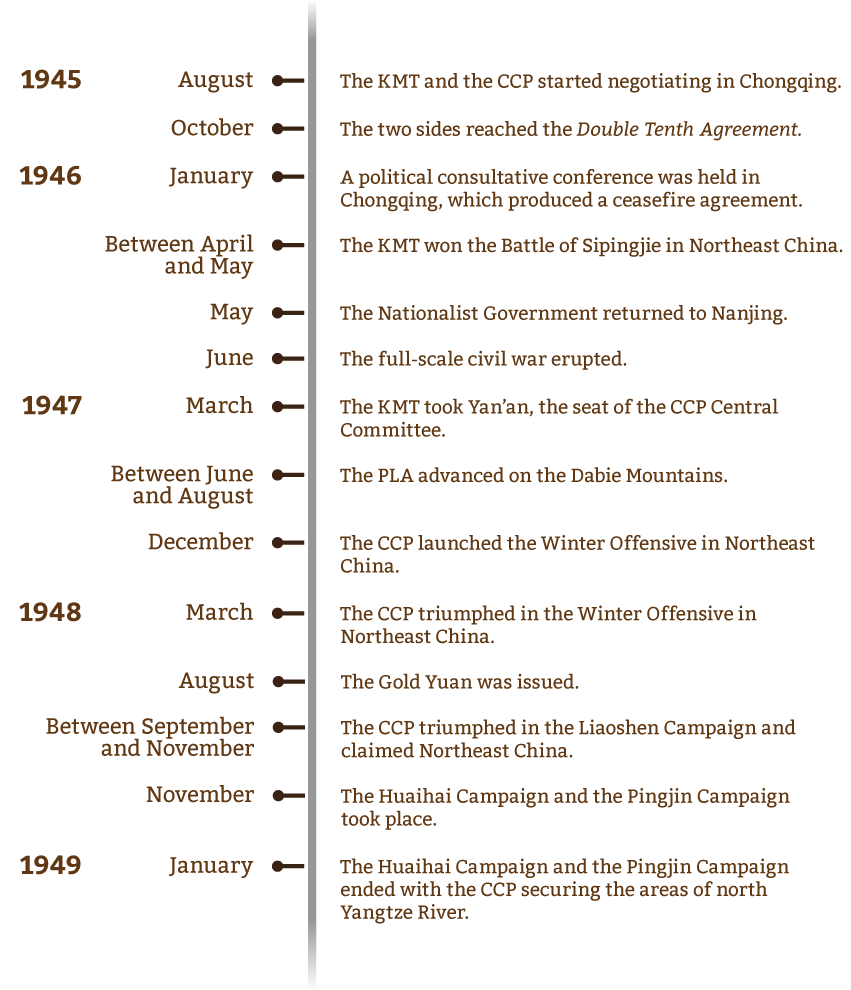 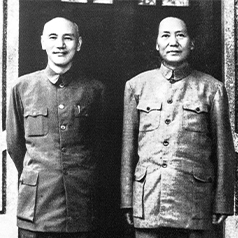 (1) The Chongqing Negotiations and the Double Tenth Agreement 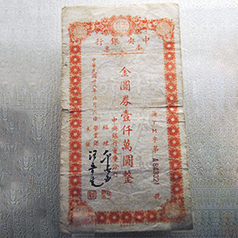 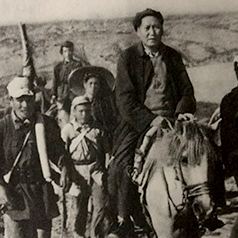 (3) The NRA’s Early Advantage and the CCP’s Ascent 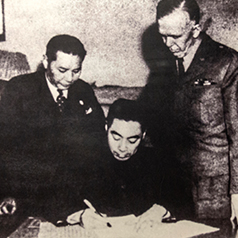