The President of the Republic of China Li Yuanhong (黎元洪) summoned Zhang Xun (張勳), the Military Governor of Anhui (安徽督軍), to mediate the palace-council dispute (府院之爭) in Beijing (北京) in June 1917. During the Qing dynasty, Zhang served as the Commander of Jiangnan (江南提督) and the Viceroy of Liang-Jiang (兩江總督). Even after the Qing Emperor’s abdication, Zhang ordered his troops to retain their queues as a sign of loyalty to the old regime, earning them the nickname “braided army”. Upon arriving in Beijing with his troops, Zhang immediately carried out restoration. In the early morning of 1 July, he and a party of loyalists that included Kang Youwei (康有為) restored the abdicated emperor Puyi (溥儀) to the throne, renamed the year from the “sixth year of the Republic of China” to the “ninth year of Emperor Xuantong’s (宣統) reign”, and hung the Qing dynasty’s dragon banners around Beijing. Meanwhile, Li sought refuge at the Japanese legation. With his political rival out of the picture, Duan Qirui (段祺瑞) immediately sent troops to crush the Manchu Restoration in Beijing on 12 July. With Zhang fleeing to the Dutch legation, Puyi had to abdicate once again.

After the Manchu Restoration failed, Li took the blame and resigned. Feng Guozhang (馮國璋) succeeded the presidency while Premier Duan was lauded as a hero for “reinstating the republic”. On 14 August 1917, Duan officially declare war on the Central Powers including Germany and Austria-Hungary, and sent a massive number of labourers to Europe, Africa, and other places to work for the Allied Forces. At the same time, he also borrowed heavily from Japan, sold out China’s national interests by granting many concessions, refused to recognise the Constitution, and dissolved the National Assembly.

Sun Yat-sen (孫中山) condemned Duan for “re-establishing China as an empire behind the facade of a republic” and launched the Constitutional Protection Movement (護法運動). In August 1917, the constitutionalists (護法派) convened an Extraordinary Parliament in Guangzhou (廣州), and proceeded to establish the Constitutional Protection Junta. Sun became the Generalissimo of the Navy and Army while Tang Jiyao (唐繼堯) and Lu Rongting (陸榮廷) were appointed marshals. With a southern army readied for the Northern Expedition, a civil war was about to break out.

On the left: Zhang Xun, the Military Governor of Anhui; on the right: the newly reinstated Qing Emperor Puyi sitting on the imperial throne in the Palace of Heavenly Purity (乾清宮). As the palace-council dispute escalated in June 1917, the situation was unfavourable for President Li Yuanhong. He then urgently summoned Zhang to mediate the dispute in Beijing. After arriving with his braided army, Zhang suddenly convened with Kang Youwei and the remnants of the Qing government to restore the abdicated emperor Puyi and the Qing dynasty.

On the left: a portrait of the 12-year-old Puyi in imperial robes taken when he was reinstated as emperor in 1917; on the right: the streets and shops in Beijing flying the Qing dynasty’s dragon banners after the restoration.

Caught off guard by Zhang Xun’s sudden attempt to reinstate Puyi in July 1917, Li Yuanhong hurriedly fled to the Japanese legation for refuge. In his telegram to the Vice President Feng Guozhang, Li asked Feng to act as president and restore Duan Qirui, who had been dismissed by him earlier, as premier. Duan immediately sent troops to deal with Zhang. The photo shows the troops of Duan and Zhang fighting at the East Gate of the Forbidden City (紫禁城) in Beijing. 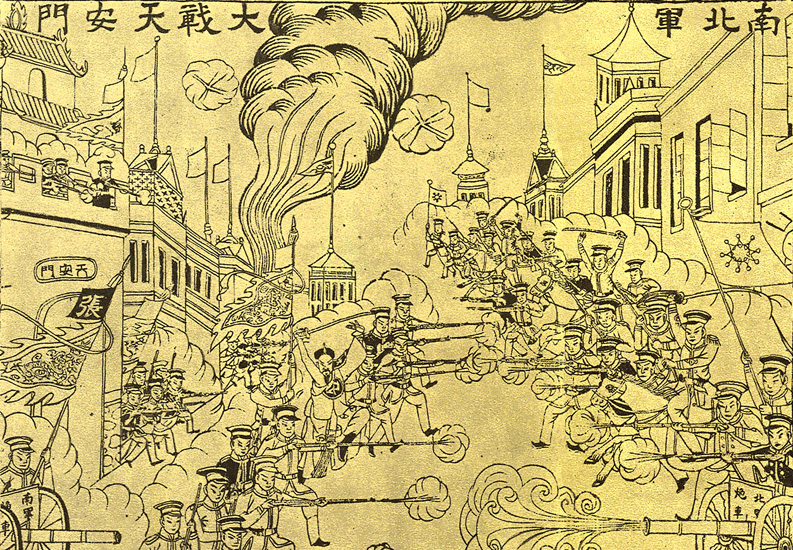 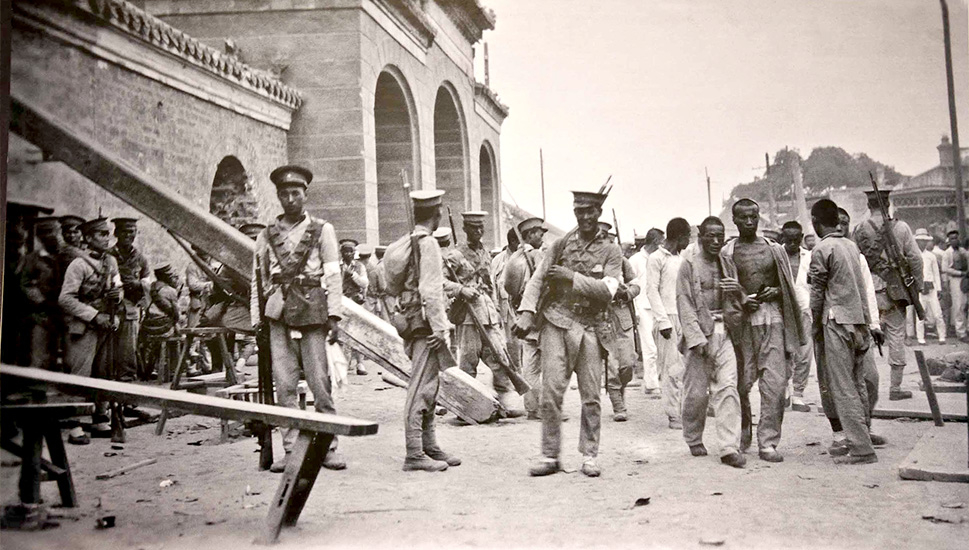 On 12 July 1917, the defeated Zhang Xun took refuge in the Dutch legation while Puyi abdicated once again. The restoration farce lasted only 12 days. Pictured are Duan Qirui’s troops on the streets of Beijing after their victory. 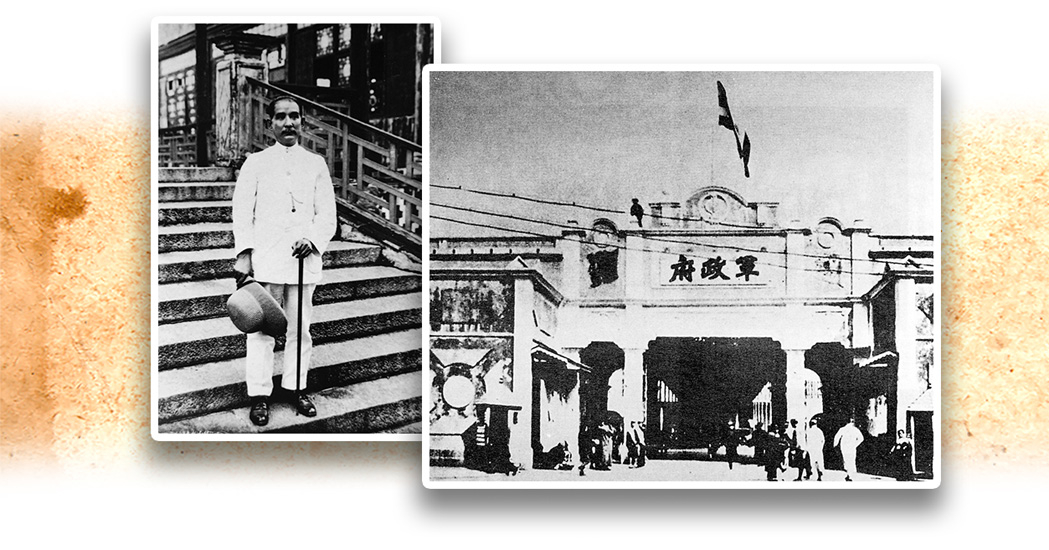 After defeating Zhang Xun, Duan Qirui refused to restore the Provisional Constitution of the Republic of China (《中華民國臨時約法》) and the National Assembly. To rally opposition against the Duan-led administration in Beijing, Sun Yat-sen travelled south to Guangzhou and launched the Constitutional Protection Movement. On the left: a photo of Sun arriving in Guangzhou; on the right: the main entrance to the Guangzhou Military Government building in 1917.

Like Sun Yat-sen, Cheng Biguang hailed from Xiangshan (香山), Guangdong Province (廣東). He was a participant in the Sino-Japanese naval battle and the anti-Qing revolution. After Yuan Shikai’s death in 1916, Cheng was appointed as Minister of the Navy by the Beiyang government (北洋政府). In 1917, he turned against the northern government and sailed south with part of his fleet to support Sun’s Constitutional Protection Movement. 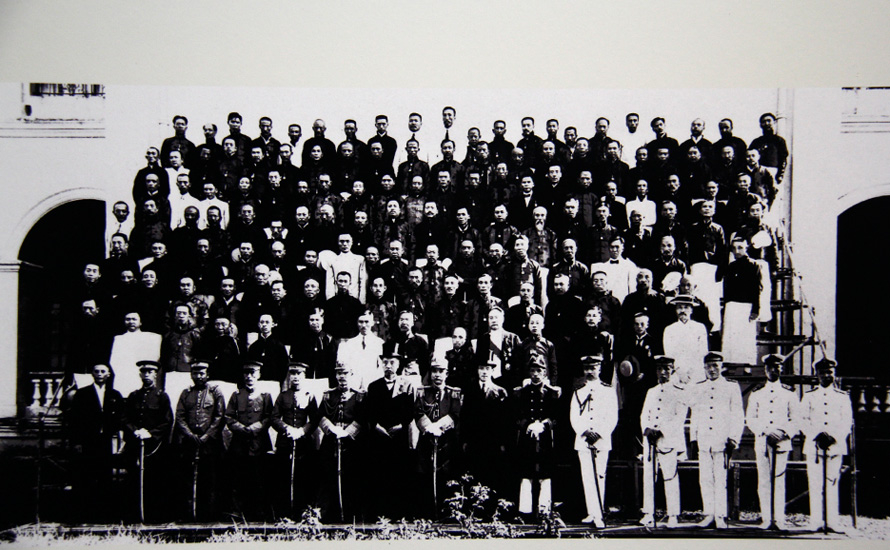 In September 1917, the Constitutional Protection Junta was established in Guangzhou. 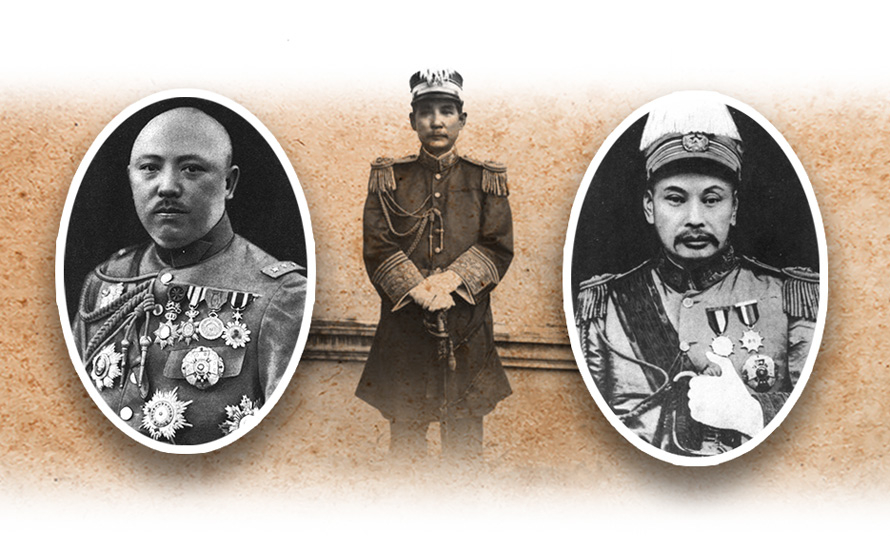 The Constitutional Protection Junta established in Guangzhou in September 1917 was headed by Sun Yat-sen (centre) as Generalissimo of the Navy and Army. Tang Jiyao (left) and Lu Rongting (right) served as marshals.

The Memorial Museum of Generalissimo Sun Yat-sen’s Mansion (left) and Sun’s telegram of resignation from the position of generalissimo in 1918 (right). Shortly after its establishment, the Constitutional Protection Junta launched the Northern Expedition and kickstarted the civil war between southern and northern China. In truth, however, the southern warlords did not uphold the Constitution genuinely and did their best to sideline Sun. On 28 January 1918, the Naval Minister Cheng Biguang, a supporter of Sun, was assassinated. In May 1918, Sun resigned from the position as generalissimo. The Constitutional Protection Movement thus ceased.