Both China and France had wins and losses in the Sino-French War. However, France had the overall upper hand in terms of its dominance in naval battles and the amount of territory captured in the land campaigns. That was basically Tonkin (northern Vietnam) and in effect the entire country. The Qing government, desperate for a chance to make peace, saw the major victory in the Battle of Zhennan Pass (鎮南關) as the perfect opportunity to strike compromises with France and opt out of the war while looking good. Meanwhile, Military setback toppled the then French Prime Minister Jules Ferry and his cabinet. France realised that winning the war would be harder than they had expected. Thus, ending the war by returning to the negotiating table suited both parties.

(1) The Qing government shall recognise Vietnam as a French protectorate. Each country shall designate commissioners within six months from the conclusion of the treaty to jointly demarcate the frontier between China and Vietnam;

(2) The China-Vietnam land frontier shall be opened for trade. The two trading posts would be designated on the Chinese frontier in the region north to Bảo Thắng and Lạng Sơn respectively. Tariffs on import and export across the border shall be reduced;

(3) Should China decide to construct railway tracks, it shall address itself to French industry;

(4) The French military shall withdraw from Taiwan (台灣) and the islands of Penghu (澎湖).

Ratifications of the Treaty of Tientsin were exchanged in Beijing on 28 November 1885. From then on, China’s recognition of Vietnam as a French protectorate would leave provinces of Yunnan (雲南), Guangxi (廣西), and other regions in south-western China wide open to foreign interference, which eventually fell under French influence.

The defeat at Zhennan Pass sent the French military into disarray momentarily. Before the Qing military could arrive, the French abandoned the strategic location Lạng Sơn and fled. The incident caused a furor among the public in France that ended with the downfall of the then Prime Minister Jules Ferry and his cabinet. With both parties eager for an end to the war, a truce was called and negotiations commenced. Pictured are Jules Ferry and modern-day Lạng Sơn. 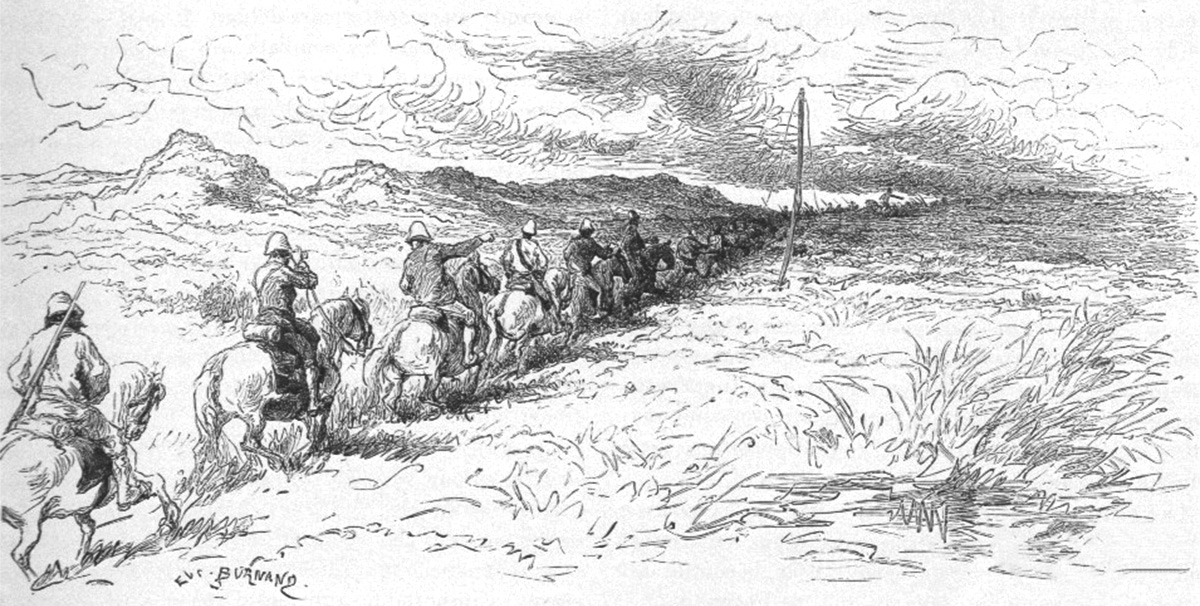 In October 1885, the French force advanced on Lạng Sơn, which the Qing force had won from them in the previous battle, and reoccupied it. According to the Sino-French Treaty of Tientsin, China agreed to relinquish its suzerainty over Vietnam. The French proceeded to retake areas that were lost to the Qing force in the later stage of the Sino-French War until they controlled the whole Vietnam. 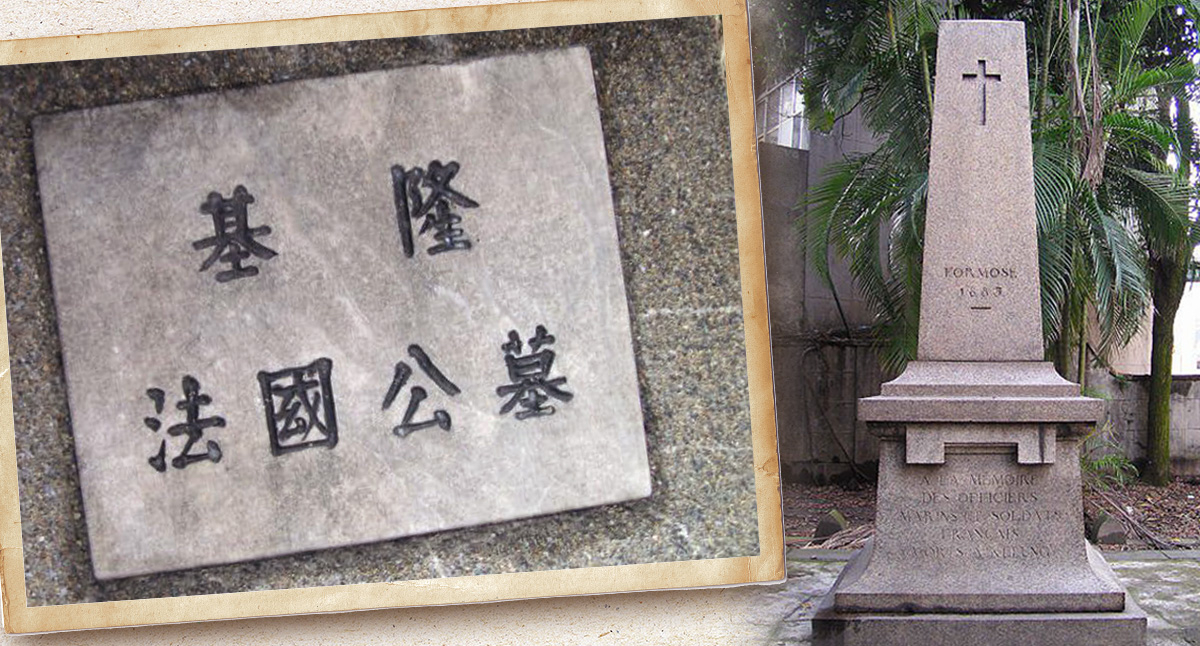 According to Article nine of the Sino-French Treaty of Tientsin: “After the present treaty has been signed, French forces will receive the order to retire from Keelung (基隆) and to cease visitation, etc., on the high seas.” In present-day Keelung, there are cemeteries and monuments commemorating the French soldiers who perished in battle or died of illness during the Sino-French War. They have been preserved as a testament to history.

Besides withdrawing from Keelung, Article nine of the Treaty of Tientsin also stated: “Within one month after the conclusion of the present treaty, the Island of Formosa (Taiwan) and the Pescadores (Penghu) will be entirely evacuated by French troops.” Pictured are a monument and a memorial plaque on present-day Magong Isle (馬公島) of Penghu. They are dedicated to Amédée Courbet, the French admiral who died of cholera while stationed there. The article that provided for the removal of the French military from Taiwan and Penghu was one of the relatively advantageous treaty terms to China.

Vietnamese labourers in a French rubber plantation, taken in the late 19th century. By controlling Vietnam, France profited greatly and was able to expand its power and influence in south-western China. 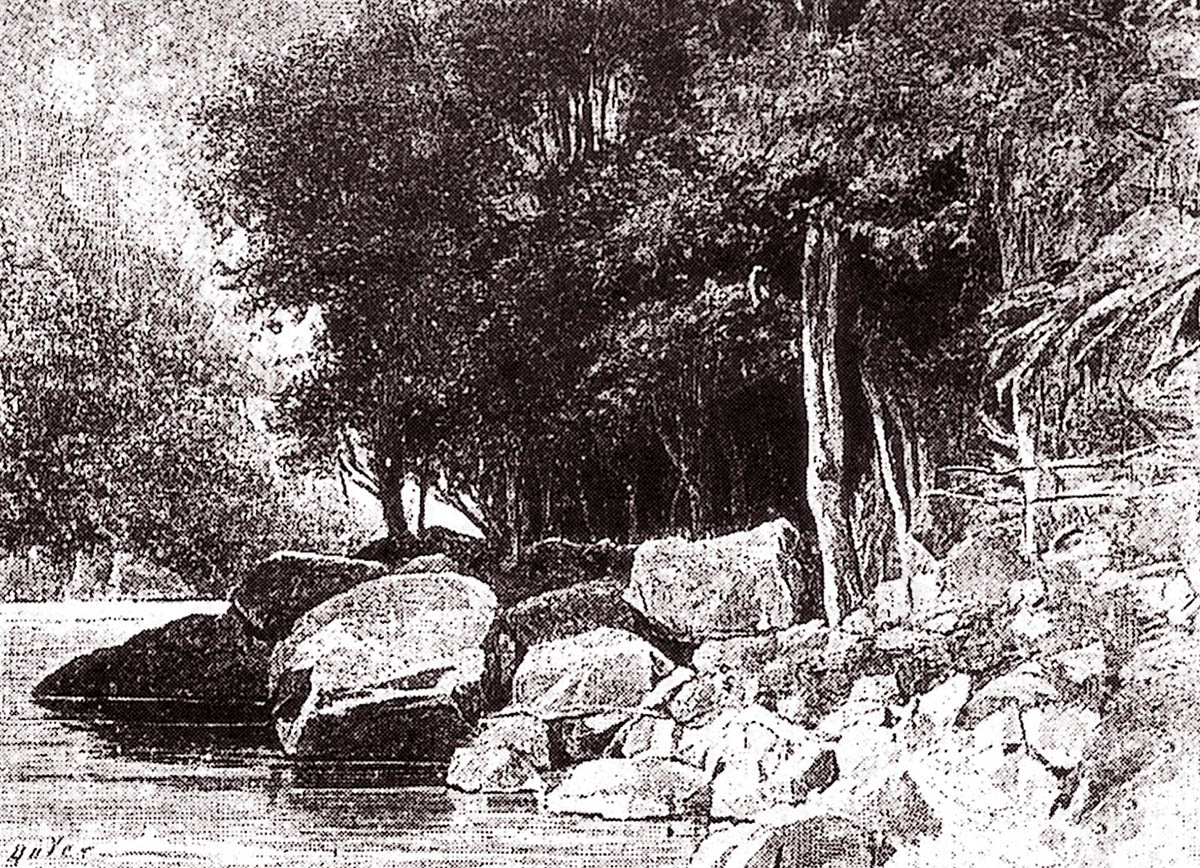 Lancang River (瀾滄江) in 1895. Originating in Qinghai Province (青海), the river flows out of China through Yunnan. Outside China, it is called the Mekong River and known as the greatest river in Southeast Asia. The Mekong discharges into the South China Sea and the Pacific Ocean at a location south of Saigon (present-day Ho Chi Minh City). Since China relinquished its suzerainty over Vietnam, a growing number of French and other Western explorers ventured up the rivers of Mainland Southeast Asia to explore their upstream sections in China. Their infiltration into south-western China exposed the region to foreign influence. 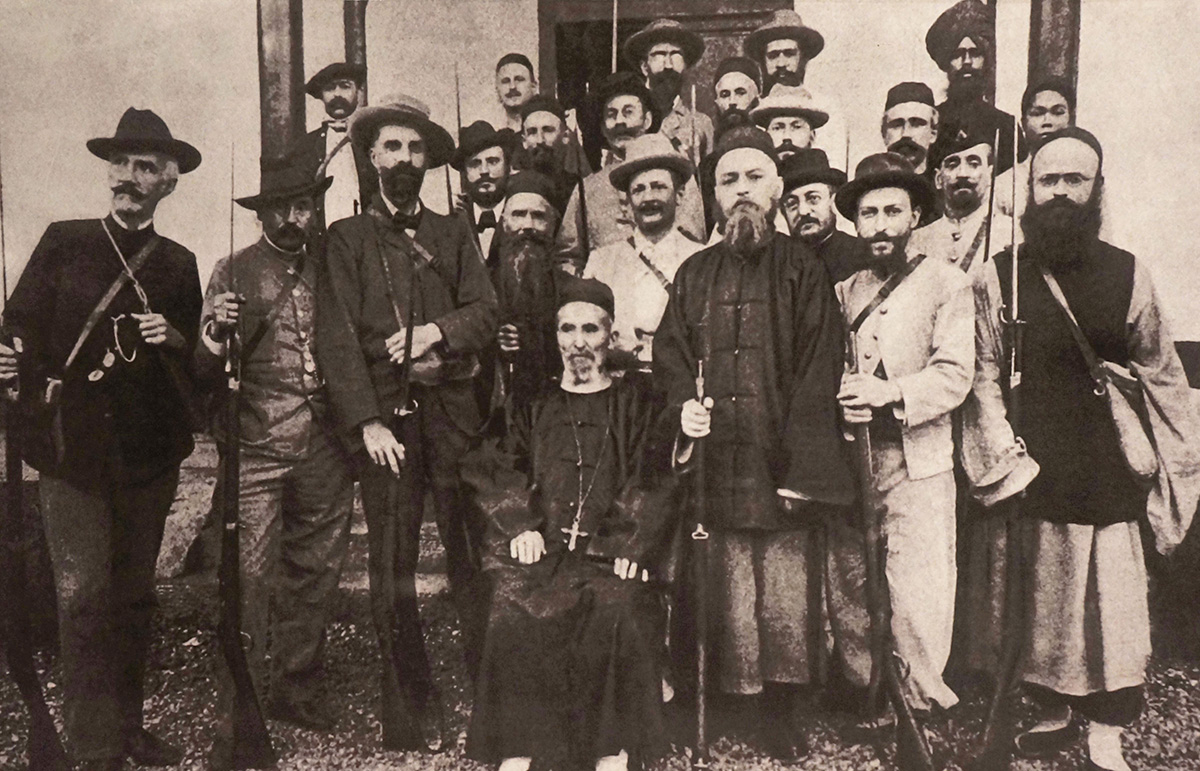 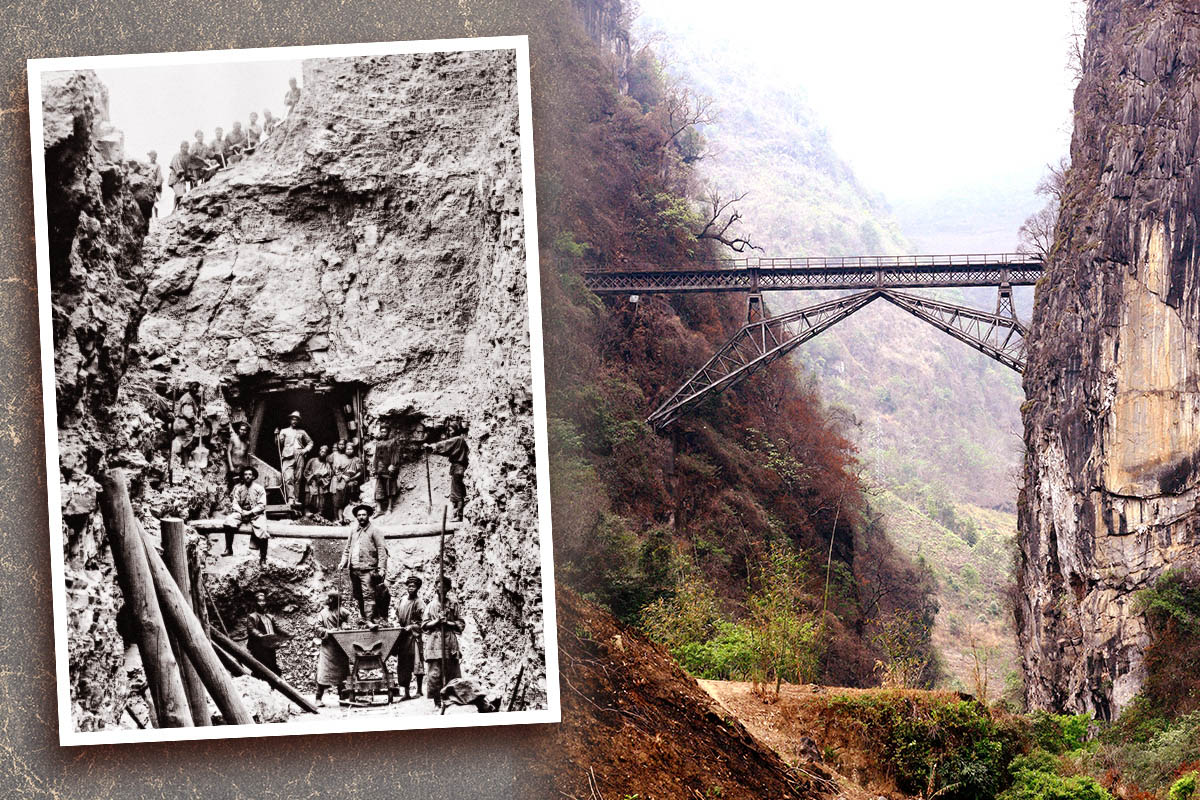 The Treaty of Tientsin also granted France trading and railway concessions in various south-western provinces of China. Taking advantage of China’s prolonged weakness, France forced the Qing government to accept the construction of the Kunming-Haiphong Railway (滇越鐵路), a project planned and controlled by France. When the railway commenced operation in 1910, France was able to expand and consolidate its power and interests in south-western China. The photo on the left features the Kunming-Haiphong Railway under construction. The photo on the right is the railway’s famous Faux Namti Bridge (人字橋), also known as the Inverted V Bridge.

The Kunming-Haiphong Railway spans 855 kilometres, of which 394 kilometres lie in Vietnam and 465 kilometres in Yunnan. The railway took seven years to construct and involved 200,000 to 300,000 Chinese labourers recruited from numerous provinces in China. During the construction, tens of thousands of labourers died. Building the Faux Namti Bridge alone cost more than 800 labourers’ lives. 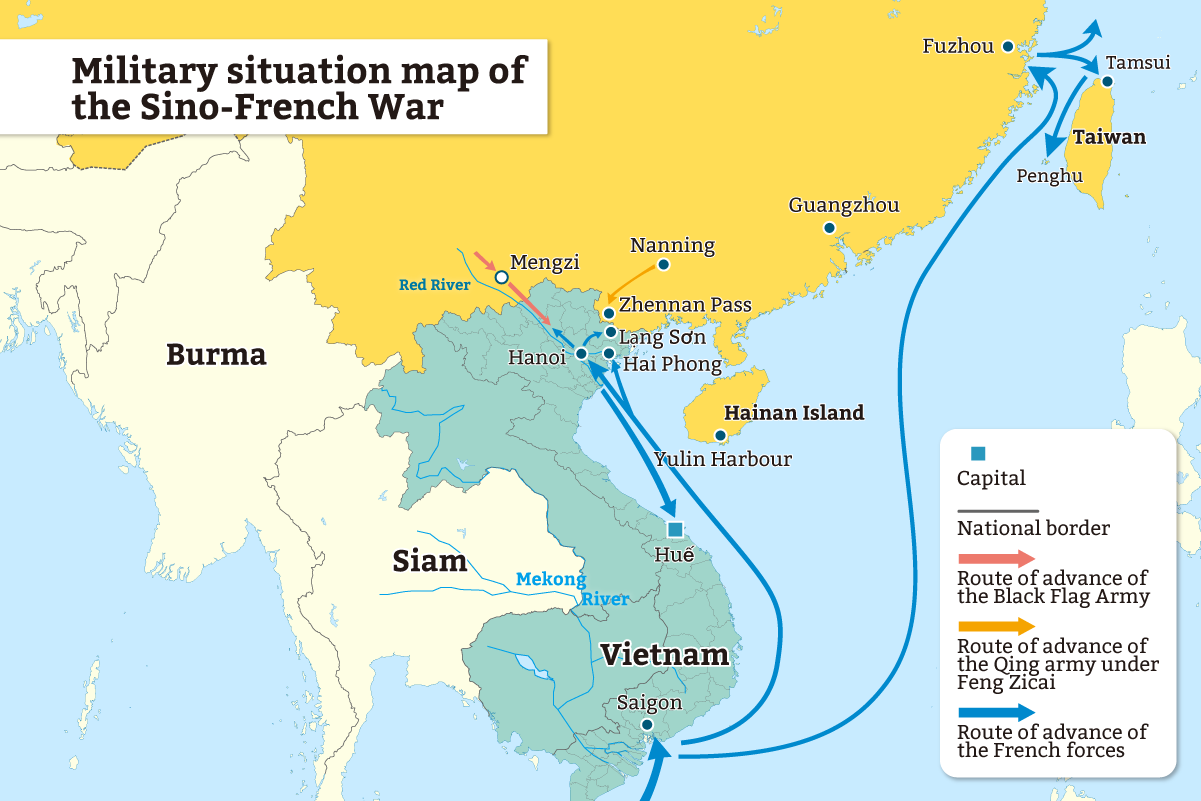 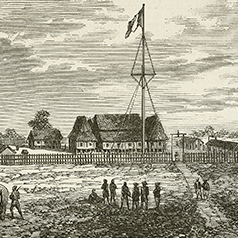 (4) The Gradual Disintegration of the Traditional Tributary System 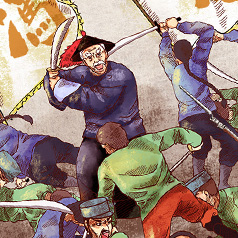 The Sino-French War: an Overview