How does one qualify as a cadre in China? How are cadres different from civil servants, what are the different cadre ranks and how does one rise through them?

It was February 2019. As People's Congress meetings kicked off all over China, high-level leadership shuffles were announced for numerous provinces including Shaanxi, Heilongjiang and Guangdong. Xi’an’s Party Secretary Wang Yongkang (王永康) was transferred to Heilongjiang; Zhou Bo (周波) who until  then had been executive vice-mayor of Shanghai, became Liaoning’s new deputy party secretary; and Wu Xiuzhang (吳秀章) engineer-turned-vice-president of China Datang Corporation (大唐集團) was re-deployed as vice-governor of Ningxia Hui Autonomous Region. According to publicly available information, prior to being ‘parachuted’ into the Ningxia leadership, Wu Xiuzhang had amassed extensive experience in corporate management from working for numerous enterprises including Sinopec Yanshan Petrochemical Company (燕山石化), Shenhua Group (神華集團) and China Datang Corporation.

Are entrepreneur-turned bureaucrats common in China?  Perhaps the relevant questions should be: how are leading cadres in China selected? What principles and standards are at work in the selection and appointment process? What are the procedures for the process?

What is a cadre?

As Mao Zedong (毛澤東)  put it, “Once the political line has been laid down, cadres are the decisive factor.” Certainly, appointing the right people for the right responsibilities - or not - can make or break a nation. With mounting international competition for talent in this global age and the need to prevent crises of governance arising from employing the wrong people, a robust cadre selection and appointment system is especially important.

What could be deemed a good cadre management? Let’s start by having a clear definition of what a “cadre” is.

Cadre is a loanword that has roughly the same meaning, albeit with minor differences, in English, French, Russian and Japanese. It is believed that the Chinese term for cadre, gan bu (幹部) was derived sometime during revolutionary period from the Russian pronunciation of the term. Since making its first appearance in the Constitution of the Communist Party of China (CPC) drawn up at the second National People’s Congress in July 1922, the term has been used to refer to those holding certain posts in party and state institutions, the army, community groups, scientific and cultural departments as well as enterprises and institutions.

Officials with budgeted posts who undertake various administrative duties are considered cadres and are entitled to cadre benefits. They can be classified into six types: 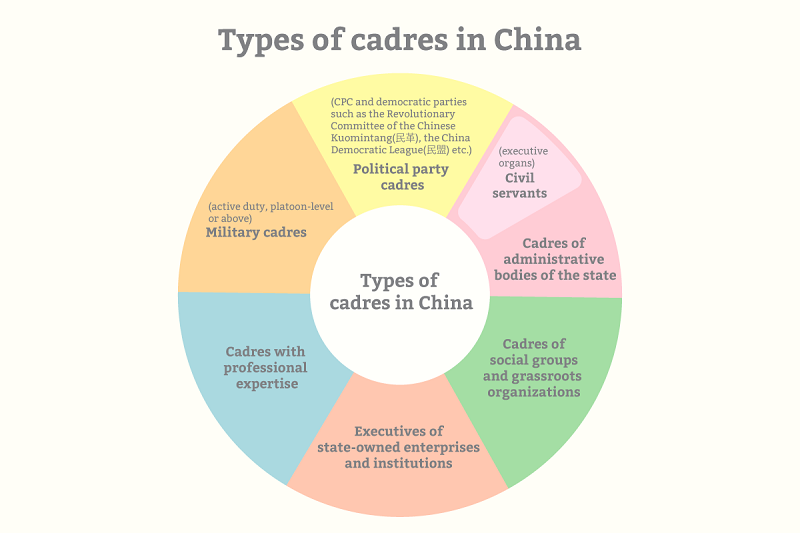 This explains why the top management can be rotated between state enterprises, local leaderships and government bodies; such career transitions are commonplace. Wang Qishan, the current vice-president of China, for example, was  once  the vice-governor of the China Construction Bank (建設銀行). Similarly, Miao Wei, minister of Industry and Information Technology (工信部) used to be the chief executive officer of Dongfeng Motor Corporation (東風汽車公司). 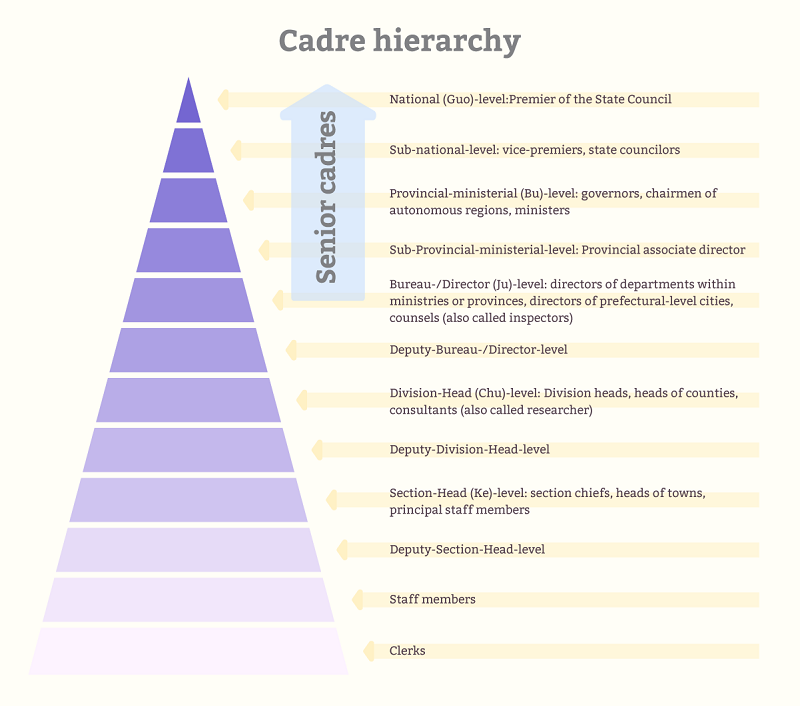 China’s cadre selection and appointment system has its roots in the revolutionary period. Due to the prevailing circumstances in those early days, most cadres were simply appointed. It wasn’t until the founding of the PRC that sound procedures for appointing and dismissing cadres were put in place. Over time, further refinements were introduced to include mechanisms for handling the management, appointment, evaluation, reward, punishment and retirement of cadres according to rank and department. Of particular importance was the establishment of the principle of Party supervising cadres’, which has remained the primary principle governing China’s cadre management system to this day. The principle is multilayered in meaning, but in practice it grants the CPC Central Committee the authority to define and implement cadre work policies, and empowers party committees at various levels to directly manage cadres above a certain grade according to their respective cadre managerial authority and scope.  It also recommends leadership cadres to state organs. In short, the party committee is responsible for supervising and managing tasks delegated to cadres.

This does not, however, imply that the party micro-manages and monopolizes all cadre-related affairs; rather, it strives to accomplish its purposes and goals via “direction-oriented, policy-oriented, system-oriented and headcount-oriented” management.

Nevertheless, broad reforms and innovative measures have been implemented to refine the cadre selection system since reform and opening-up. Structures have been put in place to deal with aging and the problem of succession among the cadre ranks following the Cultural Revolution. First the policy of a job for life for cadres was abolished. The four standards for cadre selection - more revolutionary, younger, better educated and more competent - were established. It was also decided that a reserve cadre system should be put in place as soon as possible to help ease leadership transitions, be they regular handovers or succession between the generations. China's incumbent president, Xi Jinping (習近平) was once  a member of this reserve cadre team commonly referred to as the “third echelon.” This mechanism  plays a key role in the selection and appointment of China’s top leaders to this day. Dr. Tsai Wen-Hsuan (蔡文軒) an associate researcher at the Institute of Political Science of the Academia Sinica (中央研究院政治學研究所) in Taiwan, has said that the reserve cadre system is effective in maintaining ideological unity in the CPC cadre system and in preventing instability.

From the 1980s onwards, democratic recommendation as well as open selection (by competitive comparison and interviews) became the key means of cadre recruitment for increasingly senior leadership posts; progressing over time from village officials to bureau directors – all being filled by open selection. This has led to the installation of new mechanisms such as parachuting (appointing candidates from outside the existing structure), on-the-job training and government-sponsored exchanges, to name just a few. These are more dynamic and flexible means for talent cultivation, personnel selection and personnel transfer. 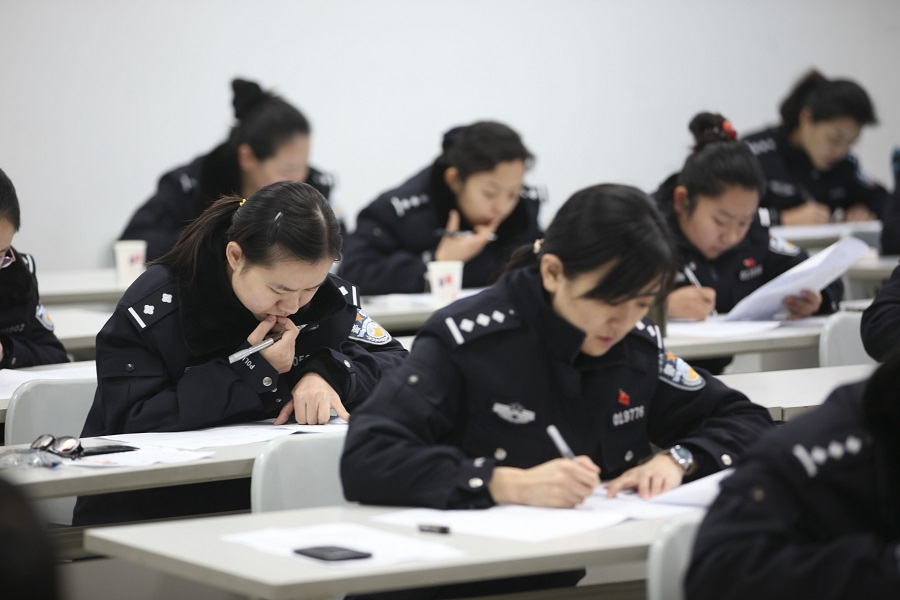 One key achievement of such institutional reforms was the establishment of China’s civil servant system, as evidenced by the promulgation of the Interim Regulations on State Civil Servants (國家公務員暫行條例) in 1993.

China entered the new millennium with a flourishing economy. This allowed priorities for cadre selection to be changed, with increased weighting given to certain assessment criteria, which included environmental protection, poverty alleviation and sustainable development-and their related experiences and expertise.  After the 18th CPC National Congress (2012) major changes were made to the selection mechanism. These were characterized by the slogan "the four not-alones" - meaning that selection should not be based on the number of votes alone, on academic qualifications alone, on age alone and on past GDP gains achieved alone. The cadre selection system itself has also been subjected to unprecedented levels of supervision.

Today, the cadre selection process has become more democratic and open than ever, with cadres being recruited via multiple selection mechanisms. These include: by appointment, by election, by examination and evaluation, by contract, by open selection and/or by competitive appointment - where appropriate for the posts concerned.  These different approaches are intended to complement and mutually support one another. The selection procedures used have also become increasingly standardized and institutionalized. 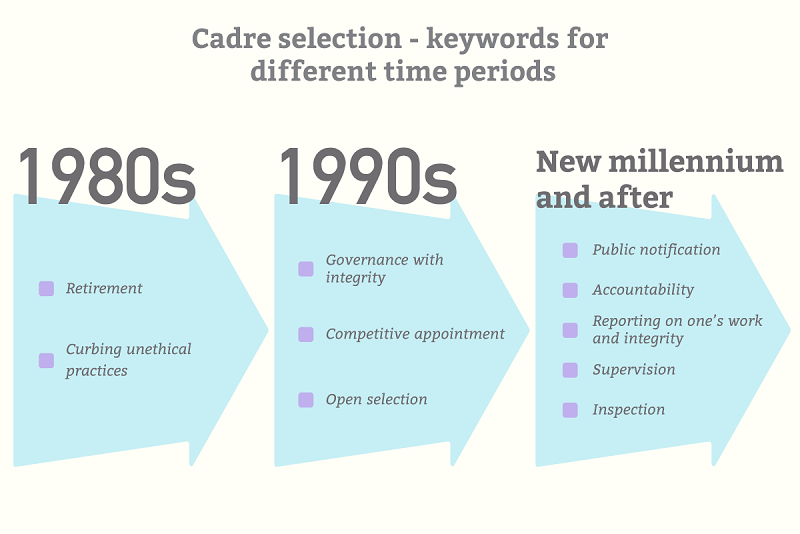 The making of a top cadre

Rising to leadership positions in the CPC, especially its highest echelons, is no easy feat. Statistically speaking, a standout among fellow run-of-the-mill civil servants must overcome odds of 10,000 to one to rise to a provincial-level post and then on to Party and state leadership, not to mention the fact that the process would take 20 years on average. 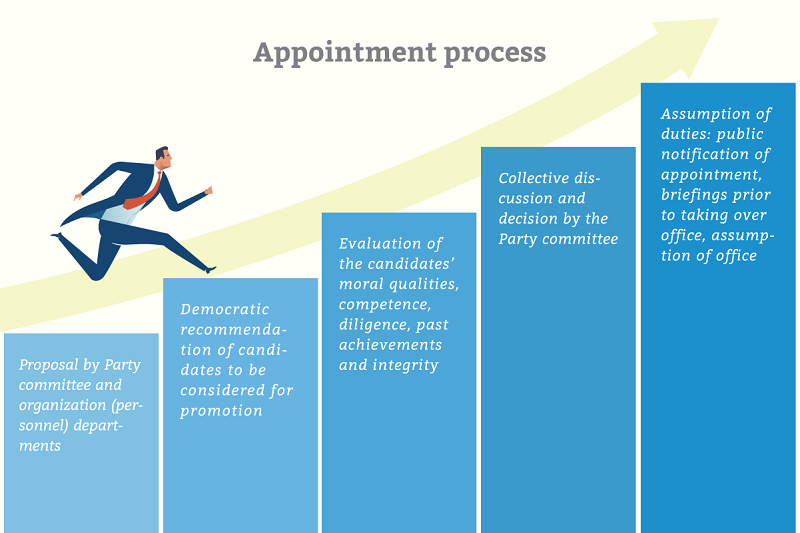 A unique feature of China’s leadership selection and appointment system is that candidates are selected via selection as well as recommendation. While public opinion and votes matter, so do recommendations and evaluations by departments and organizations. This is intended to ensure that the ones selected are not lacking in competence or integrity. In fact, the requirements for proof of   integrity are particularly stringent. Candidates’ past achievements are also scrutinized to ensure that only those whose competence and can-do attitude are generally acknowledged can emerge as new leaders.

Throughout the process, mechanisms like the democratic recommendation of candidates, their appointment by committee decision and the public notification of their candidature are signs of consultative democracy at work. These steps are complementary and mutually supportive of other democratic and competitive selection processes such as competitive election, open selection and competitive appointment.

Xu Hongwu (徐鴻武) political science professor at the Chinese Academy of Governance (國家行政學院政治學教研部) compared the Chinese system with its Western counterparts. He suggests that “unlike Western nations that allow free competition between different candidates, consultative democracy in tandem with democratic voting is practiced in China for the selection and appointment of leadership cadres.”

China upholds meritocracy as its core principle for selecting cadres, trusting two key traits - integrity and competence - to shine through in the candidates’ track records. The evaluation of candidates’ integrity and competence based on their previous achievements has become standard practice. This means that senior cadres must amass much field experience in serving at the grassroots level and in various posts, then go through complex procedures, including numerous rounds of evaluation, solicitation of comments, public polls, assessments, election by voting and public notification, before being allowed to take up a key post.

At the same time, personnel exchange mechanisms that enable cadre transfer either within a system or across systems, along with on-the-job training, have proven indispensable. They assist cadres to develop their skillsets, and are considered a rite of passage in the political careers of leaders-to-be.

As pointed out by the political scientist Zhang Weiwei (張維為) most candidates for the Politburo Standing Committee of the CPC - the highest decision-making body in China - have served as party committee secretaries at the provincial level, or in equivalent posts, for at least two terms. As running a province or municipality in China may be equivalent to running one or more European nations, an extremely high level of talent and capability is expected from those entrusted with this responsibility.

President Xi Jinping provides us with a good example. His career has included being the governor of Fujian Province, the secretary of the Zhejiang Provincial Party Committee and the party secretary of the Shanghai Municipal Party Committee. Thus, prior to his promotion to the Politburo Standing Committee of the CPC, he had already governed regions with a combined population of over 120 million. Cumulatively, he had successfully managed an economy greater than that of India. As a state leader, he also spent five years familiarizing himself with politics and military affairs at the national level.

Most democratically elected leaders in the West would be hard pressed to match such extensive experience and training. Thus Chinese officials tend to be sufficiently confident and competent that they can afford not to appease voters and are not easily swayed by the public opinion of the moment. This allows the leadership to set their sights on long-term goals and focus on the interests of the entire nation.

China’s rapid development in the past four decades has been possible in large part thanks to the Chinese leadership’s strength in getting things done. This in turn is inextricably linked to the principle of meritocracy upheld and practiced by the cadre selection system. Officials are continuously compelled by this system to seek self- improvement, build credentials, and refrain from being shortsighted vote maximizers. The nation as a whole is also bolstered by the system, enabling it to strive for better governance and work towards fulfilling its long term development goals. 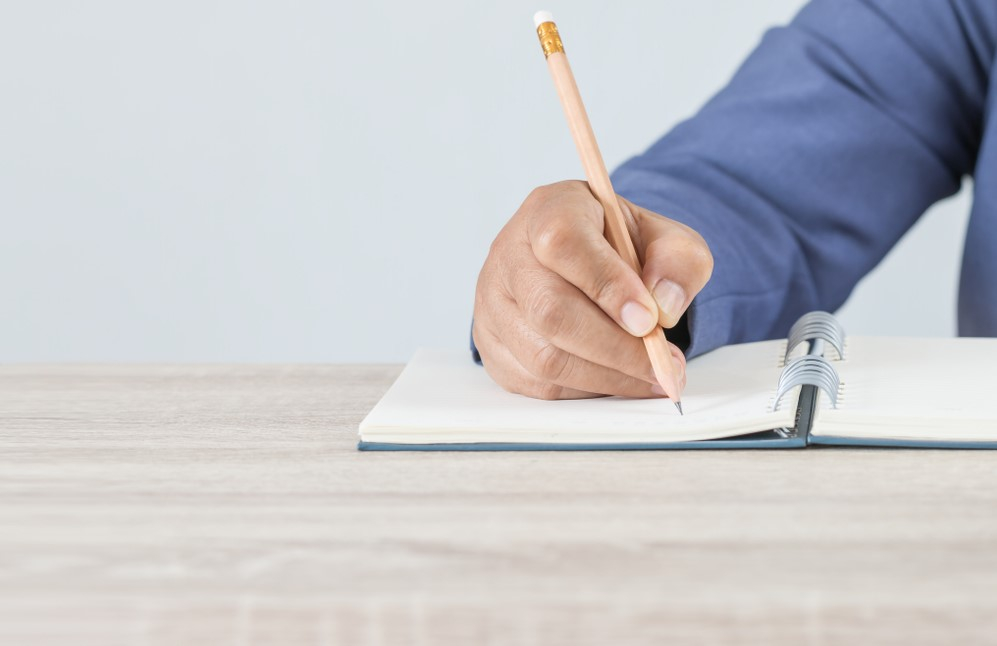 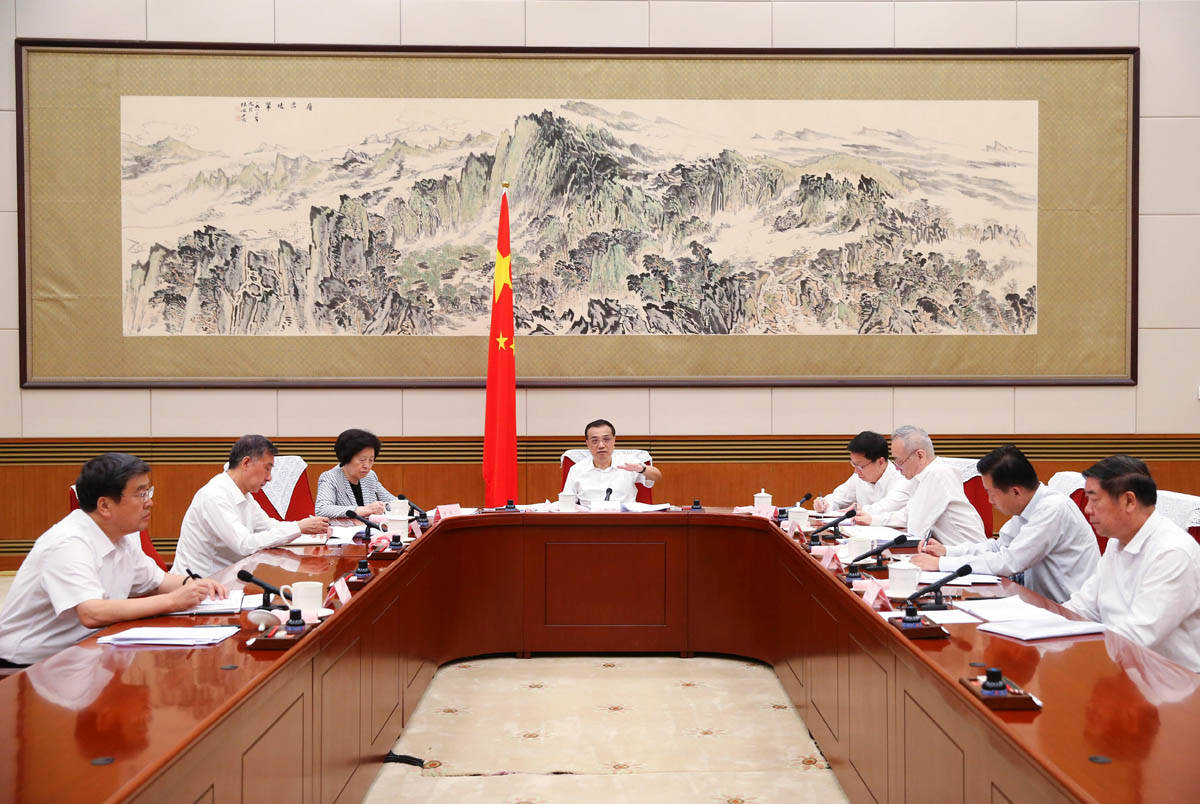