Anji County (安吉縣), which supplied the scenery for the movie Crouching Tiger, Hidden Dragon, has been lauded  as “Fair China’s Most Beautiful County.” Yet, believe it or not, just more than a decade ago it used to be riddled with quarries while its rivers ran black with pungent smell. How, indeed, did China manage this stunning transformation, and within such a short time?

Those who have watched the Oscar-winning Crouching Tiger, Hidden Dragon will surely recall this scene set in a lush sea of bamboo: a white-clad Li Mu Bai (李慕白) (played by Chow Yun-fat, 周潤發) and Jen Yu (玉嬌龍) (played by Zhang Ziyi, 章子怡) facing off and crossing swords - whilst perched on the stem-tips of an emerald green, pristine bamboo forest. This heavenly place is the Great Bamboo Sea located in Anji County in China’s Zhejiang Province (浙江省).

It’s hard to imagine “Fair China’s Most Beautiful County,” with its clear waters and green mountains, can have anything to do with a quarry-filled land where rivers ran foul and black; but that was exactly what Anji County was a little over a decade ago.

Anji’s amazing turnaround took just a decade or two; how did it manage to accomplish so much so quickly? To understand this, we must review events that happened at the turn of the century, and their close ties to the green development philosophy of “clear waters and green mountains are as good as mountains of gold and silver” (綠水青山就是金山銀山).

The story of Yu Village

Zhejiang is one of China’s wealthiest and most developed provinces, boasting the highest per capita gross domestic product (GDP) and ranking fourth for economic development among all provinces. Yet its rapid industrial development came at a price: historic residences were demolished; water courses were ravaged, their banks eroded, and their clear waters became dirty with foul smell, caused by domestic and industrial wastewaters.

In Jiaxing City (嘉興), known as Zhejiang’s “land of fish and rice,” rivers became dark with scum cover as the water-jet weaving industry boomed. Within a decade, the region’s source of potable water was seriously threatened. Jiaxing lost its reputation as a “water town”; its natural beauty became a thing of the past as its rivers got filled up with effluent that dyed it black or yellow. To contain the stench, some rivers were even covered up with plastic film.

At the beginning of the 1990s, Yu Village (余村), located near Anji County’s great bamboo sea, decided to get rich by exploiting its natural capital. Having started their own cement factories, they recklessly dug into mountains to extract limestone. They prospered as a result, but the once idyllic mountain village had become an eyesore with its pitted land, turbid rivers and shrouding dust haze.

Beginning 1997, the number of pollution incidents recorded nationwide skyrocketed, growing by 25 percent per year and surpassing 500,000 incidents by 2002. Defending the environment became a hot topic in society. There was one such incident in Jiaxing in November 2001, when over 1,000 farmers amassed a number of boats and used them to impound the river in an attempt to cut off pollution coming from upstream.

To address the growing palpable and acute tensions between resource and preservation, industrialization and environmental protection, and urbanization and quality living environment, Zhejiang Province committed itself to building an “ecological province” in 2003. Anji County drew up China’s first-ever plan for dealing with the issue.

Yu Village, Anji’s “richest village,” closed down three limestone quarries and a cement factory successively within three years. Its economic revenue immediately plunged from a peak of three million yuan to just over 200,000 yuan, causing much fear amongst the villagers. The village authorities encouraged the miners to take up occupations specializing in green economy, such as rural tourism, to help the village achieve its goals of economic growth, prosperity and ecological integrity.

In 2005, Pan Chunlin (潘春林), who used to be a tractor driver at a mine, borrowed a few hundred thousand yuan to open the village’s first farmhouse inn. “When I took on a loan to build this house, everyone said I might as well have tossed my money down the drain,” Pan recalled.

What no one expected was that as the reputation of Anji’s Great Bamboo Sea grew and the region’s ecosystem recovered following the mine closures, the village nestled between three mountains and bisected by a stream quickly found itself riding the counter-urbanisation trend of rural eco-tourism. As group after group of tourists from Shanghai and Hangzhou turned up, Yu Village started selling scenery instead of limestone, and has not looked back since. 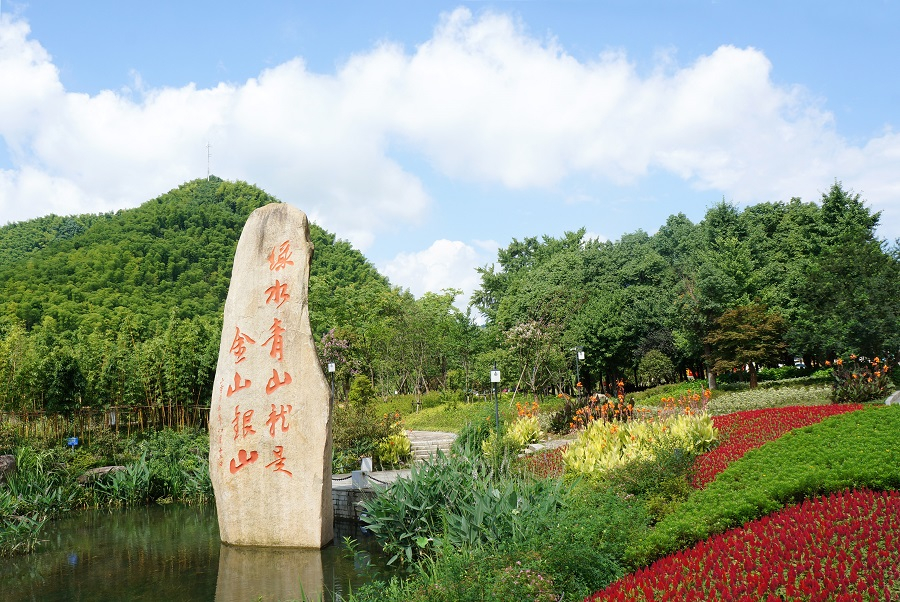 On August 15, 2005, Xi Jinping (習近平), as the then Party Secretary of Zhejiang Province, visited Yu Village while inspecting rural areas. To Bao Xinmin (鮑新民),  the Yu Village Party Secretary, he remarked, “you have closed down the mines; the clear waters and green mountains thus restored are now mountains of gold and silver.”


Drawing on Zhejiang’s experience of building an ecological province and various pilot schemes in other regions, he elaborated on the philosophy of “clear waters and green mountains are as good as mountains of gold and silver” (綠水青山就是金山銀山) for the first time. In a short commentary subsequently released, he proposed: “We should pursue harmony between man and nature as well as harmony between the economy and society, in order to have clear waters and green mountains along with mountains of gold and silver.”


He also pointed out: “If ecological bounty can be harnessed to the advantage of eco-friendly agriculture, eco-friendly industries and eco-tourism, then clear waters and green mountains can be as valuable as mountains of gold and silver.”

The philosophy “clear waters and green mountains are as good as mountains of gold and silver” addresses the relationship between man and nature, economic development and environmental protection - a relationship that is inevitably rocky during the industrialization process. In this regard, developed countries have already learned their bitter lessons: England’s River Thames, once called the “Great Stink” due to the combination of sewage and industrial pollution, took 150 years to clean up; Los Angeles, plagued by photochemical smog since the 1940s, finally solved the problem in the early 21st century... All these are examples of the process of “develop first, cleanup later,” which the developed countries went through in the last century.

Taking these lessons to heart, people began to rethink and explore their own ways of living. From the release of the Limits to Growth report by the Club of Rome in 1972, up till the adoption of Agenda 21 by the United Nations Conference on Environment and Development in 1992, a global consensus to protect the Earth and pursue sustainable development gradually took shape.

In China’s case, reform and opening-up enabled it to complete industrialization swiftly, as compared with other countries that usually took over a century to do. As a result, this also intensified all of the problems brought about by the process: dwindling natural resources, environmental pollution, growing ecological imbalance and a significant decline in peoples’ living quality and well-being. 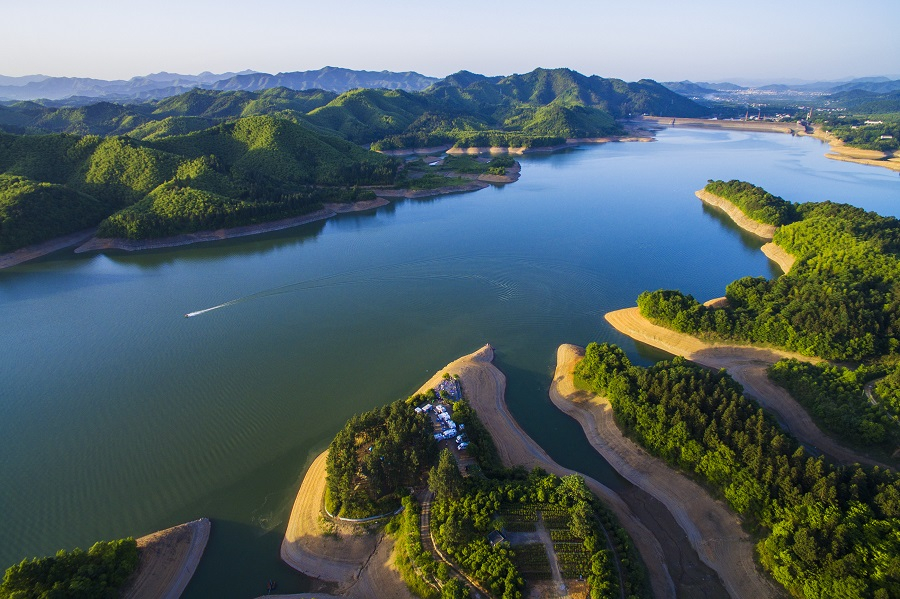 For the “two mountains” to become one, the “clear waters and green mountains” must first be restored. To this end, Zhejiang Province instituted the “river chief system” (河長制) and appointed 60,000 “river chiefs” who would be responsible for managing the drainage basin and performing duties such as protecting water resources, pollution prevention and control and ecological restoration.

To manage its water resources, the province found it necessary to abandon its outdated approach to economic growth. This spurred the development of new industries like e-commerce and rural tourism. Instead of falling, GDP rose.

Zhejiang was able to integrate market mechanisms into its green development relatively early, forcing enterprises to phase out obsolete production modes by leveraging change through the market, for example by introducing differential electricity tariffs that increase the cost of electricity by 0.3 yuan per kilowatt for inefficient enterprises; and establishing the nation’s first-ever pollution permit trading system that provides incentives for enterprises to adopt pollution control measures so as to capture the profit margins offered by permit trading.

According to Lan Jinping (蘭建平), head of the Zhejiang Industrial Economy Research Institute (浙江工業經濟研究所), the more well-developed a region, the more it is prone to path-dependence; external forces are all the more necessary to boot it off a well-trodden developmental path, and thus break dependence.

To this end, an array of national measures have been released to drive economic development and industrial structure towards a green transition. These include the establishment of ecological compensation mechanisms, amendments to the Environmental Protection Law, the launch of environmental inspections and levying of new environmental protection taxes.

Long known as the “sea of death,” the Kubuqi Desert (庫布其沙漠) of Inner Mongolia has been the subject of restoration efforts for the past few decades. As a consequence 6,253 square km of the desert have been vegetated and reclaimed so far. In 2014, the Kubuqi was lauded as a “global ecological and economic demonstration zone” by the United Nations. As the desert becomes greener, local farmers and herdsmen are able to prosper through various commercial ventures like eco-pastoralism, eco-tourism and health food production. 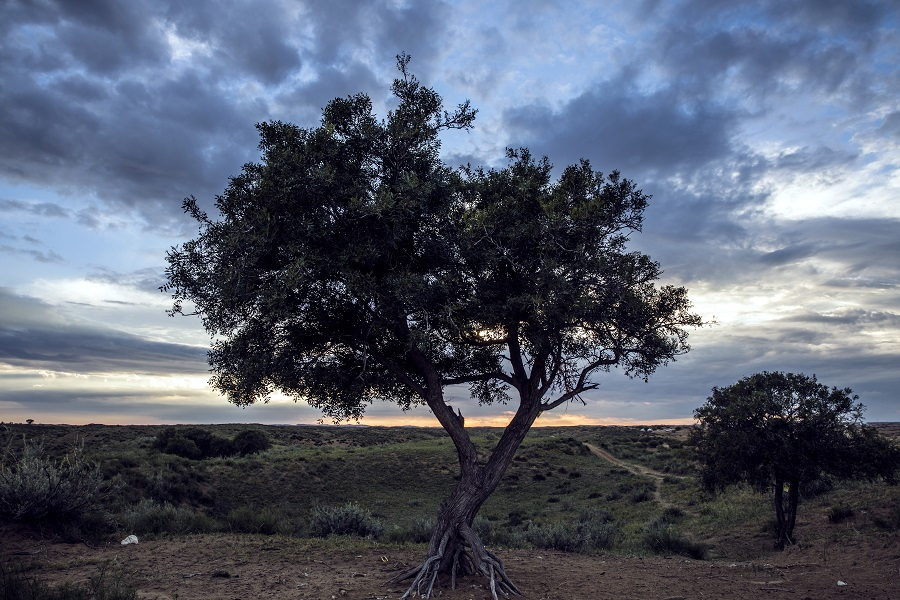 Xipo 29 (西坡29), a bed and breakfast inn with an eco-friendly and nostalgic vibe, is located at the foot of Moganshan Mountain (莫干山) in the renowned “cool realm.”  The most expensive room, originally converted from a pig sty, remains highly sought-after despite a price tag of 1,580 yuan a night. As of March 2018, there are over 550 bed and breakfast inns similar to Xipo 29 at Moganshan, and business is booming. Among them, “Naked Stables,” a private resort recommended by CNN as “one of the 15 must-visit places in China other than the Great Wall,” contributes over 100,000 yuan in tax revenue per year from one hotel bed alone. In this case, scenic mountains and crystal waters have been transformed into an economic advantage.

For less well-off regions, a scenic environment boasting verdant mountains, limpid waters and other ecological riches can be their greatest source of wealth and most important asset.

Chen’ao Village (陳嶴村), located in Rui’an City (瑞安市)  Zhejiang Province, had been mired in poverty for years before it made its successful comeback through environmental restoration. Now boasting clean air, lush mountains and tinkling streams, the village’s beautiful environment has become its golden goose. Water resources have been the key to its success and Chen’ao Village now offers numerous natural swimming pools, small-scale water parks and a 1.7 km-long rafting route built on Daluoshan Mountain (大羅山) behind the village. The village makes a combined revenue of more than 5.9 million yuan a year and has a net asset worth of over 80 million yuan.

Chen Zhongfang (陳眾芳), the Chen’ao Village Party Secretary, admitted that the village’s experience was an eye-opener, helping people realize that though they had previously treated the environment with the utmost indifference, it could become their greatest asset. The message is clear for the entire nation: we must protect the environment to safeguard our future.

In Zhejiang, there are tens of thousands of villages that share Chen’ao Village’s experience. On September 26, 2018, Zhejiang’s “Green Rural Revival Programme” received a “Champions of the Earth” Award, the United Nations’ highest environmental honour, for its success in restoring the environment and boosting rural income.

These endeavours are a testament to China’s efforts in promoting development that balances economic, social and environmental objectives and its success in unifying “clear waters and green mountains” and “gold and silver mountains” to share a common and life-enhancing purpose.

The Profound Meaning behind “Clear Waters and Green mountains are as Good as Mountains of Gold and Silver” and Its Implementation (「綠水青山就是金山銀山」的豐富內涵和實踐途徑) by Zhang Yunfei (張雲飛), Qian Xian Magazine (前線雜誌) 2018 Issue 4

“Clear Waters and Green mountains are as Good as Mountains of Gold and Silver” Explained in One Diagram (一圖看懂「綠水青山就是金山銀山」) gmw.cn (光明網) June 6, 2017

Clear Waters and Green mountains are as Good as Mountains of Gold and Silver (綠水青山就是金山銀山) (documentary by Zhejiang Television, 浙江衞視) cctv.com (央視網)

Plan Ahead for a Better Future -- Five-Year Plans