In January 2018, China published a White Paper on its Arctic policy. In the paper, it sets out its policy goals on the Arctic as: “to understand, protect, develop and participate in the governance of the Arctic”; and affirms its adherence to the basic principles of “respect, cooperation, win-win result and sustainability” when participating in Arctic affairs. The policy shows that China attaches much importance to the Arctic region and its issues, and is willing to support Arctic affairs by providing necessary manpower, resources and knowledge.

Pure white snow... perpetual cold... adorable polar bears... rugged and intrepid Eskimos... these are the impressions most people have of the Arctic. The Arctic found itself in the spotlight in January 2018, when China’s State Council Information Office published a White Paper titled China’s Arctic Policy. In the past, non-Arctic countries like Germany and Japan had likewise published their own policies on the Arctic. What was it about China’s White Paper that caused a stir upon its release? 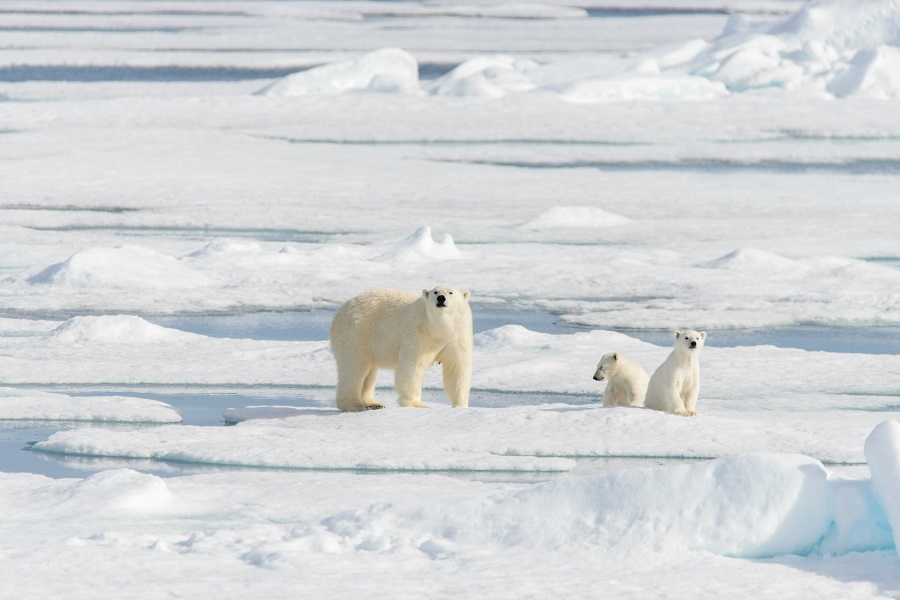 Polar bears are not all that the Arctic has to offer. An increasing number of countries are eyeing the Arctic region for its rich resources as well as its scientific, transport and strategic significance.

Geographically, the Arctic region commonly refers to the area north of the Arctic Circle (approximately 66 degrees 34 minutes N) which encompasses the Arctic Ocean Waters, insular land territories and northern regions of the continental landmasses of Europe, Asia and North America. The continental and insular land territories cover an area of around 8 million square kilometres, with sovereignty over them belonging to the United States, Russia, Canada, Denmark, Norway, Iceland, Finland and Sweden respectively.

While the Arctic region is a veritable land of ice and snow for most of the year, it is also the region on Earth that is most sensitive to climate change, and rapid changes are already under way in its atmosphere, ocean, land and ecosystems. Over the past 30 years, the Arctic’s summertime sea ice extent has experienced a one-fourth reduction amid a warming climate; this is expected to raise global sea levels as well as accelerate the release of methane and other greenhouse gases previously trapped under the sea ice, which would in turn exacerbate global climate change; hence, conducting scientific research on the Arctic is a matter of paramount importance to all countries, particularly those in the Northern Hemisphere.

Arctic research is also instrumental in exploring the region’s rich prospects of minerals, oil, gas and living resources. According to a United States Geological Survey assessment report, the Arctic region could hold 13%, 30% and 9% of the world’s undiscovered reserves of oil, natural gas and coal respectively. The loss of sea ice is expected to cut the recovery costs of these resources further. The Arctic also holds mineral reserves of gold, copper, iron, lead, platinum, nickel, zinc and diamonds. Teeming with cod, salmon and krill, Arctic waters like the Barents Sea and the Beaufort Sea are poised to become important new fishing grounds in the context of global warming.

The Arctic’s unique geographical location and natural environment have drawn international attention. Different sectors of the Arctic are currently governed by different international laws or legal systems. Major ones include the United Nations Convention on the Law of the Sea (UNCLOS), the Spitsbergen Treaty, international environmental conventions (such as the United Nations Framework Convention on Climate Change), regional legal documents and region-specific cooperative agreements (such as the Agreement on the Conservation of Polar Bears signed by five Arctic Ocean nations)

Signed in 1920, the Spitsbergen Treaty granted Norway sovereignty over the Spitsbergen Archipelago, and also gave signatories of the Treaty equal rights to enter the region to undertake any maritime, industrial, mining or trade activities. China joined the Treaty in 1925.

Up till now, the Arctic does not have a single comprehensive international legal regime, and thus its governance regime comprises various institutions that are associated with different entities and operate at different levels. Among them are the Arctic Council, an intergovernmental governance system; the Arctic Economic Council, which was jointly formed by governments, enterprises and non-governmental organizations; and platforms such as The Arctic Circle and the International Arctic Science Committee. Together, these bodies address issues concerning the Arctic in their respective fields.

An intergovernmental forum formed by eight polar nations, the Arctic Council aims to protect the Arctic environment, promote the region’s continued economic and social development, and enhance its peoples’ welfare. In 2013, China became an observer state at the Arctic Council, with the right to attend meetings, make statements and submit proposals through a member state. 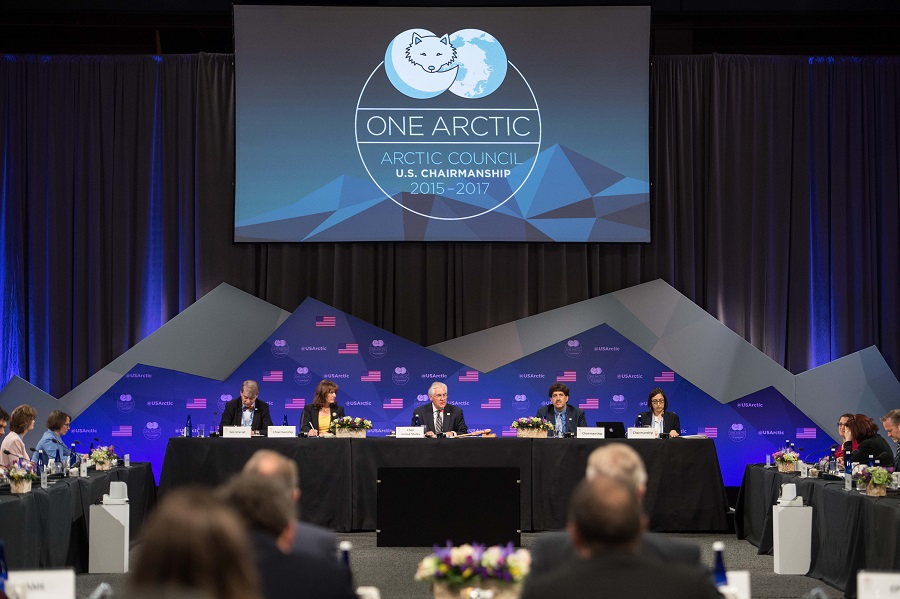 Meeting of the Arctic Council held in the United States in 2017 (Source: Visual China Group, 視覺中國) 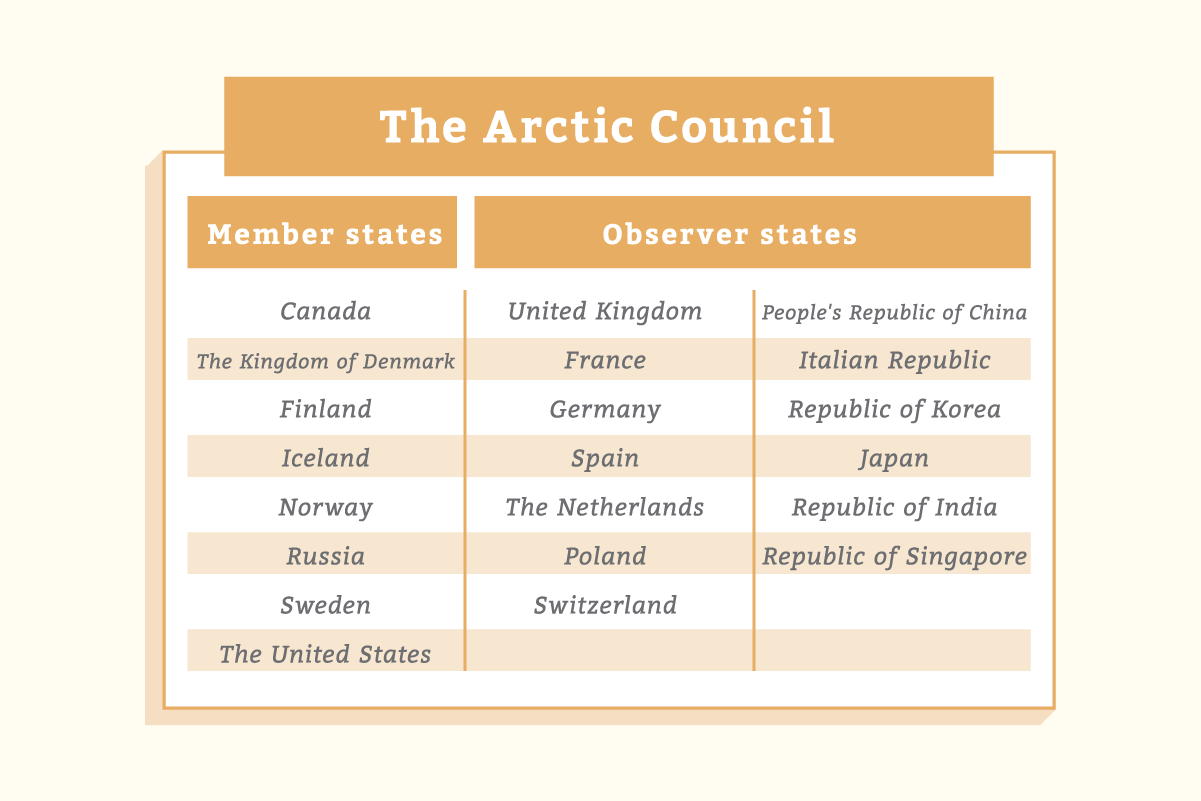 What does the Chinese White Paper say?

Around 9,000 words long, the White Paper China’s Arctic Policy recognizes that with global warming under way, the Arctic issue is vital to the existence and development of all countries and humanity; it identifies China as a “Near-Arctic State” and “an important stakeholder” in regard to its geographical position, and points out that the natural conditions of the Arctic and their changes have a direct impact on China’s climate system and ecological environment; it affirms China’s respect for the sovereign rights of Arctic states, and also maintains that the lawful freedom of navigation and rights to use the Arctic shipping routes, enjoyed by all countries, should be ensured in accordance with international treaties and general international law.

The White Paper recounts China’s long involvement in Arctic affairs: in 1996, China became a member of the International Arctic Science Committee; in 2004, China completed the “Arctic Yellow River Station,” and successfully carried out a number of scientific expeditions in the Arctic with the research vessel Xue Long (Snow Dragon, 雪龍號) serving as the platform; In 2005, China successfully hosted the Arctic Science Summit Week, a high-level conference on Arctic affairs; and in recent years, Chinese companies have begun to explore the business opportunities associated with Arctic shipping routes.

Building on these endeavours and efforts, the White Paper sets out its policy goals on the Arctic as “to understand, protect, develop and participate in the governance of the Arctic,” and pledges to adhere to the basic principles of “respect, cooperation, win-win results and sustainability” when participating in Arctic affairs.

China’s major policies for addressing Arctic affairs, as set out in the White Paper, include: expanding efforts in exploring and pursuing a deeper understanding of the Arctic, protecting the Arctic ecological environment and addressing climate change, utilizing Arctic resources in a lawful and rational manner, participating actively in Arctic governance and international cooperation, and maintaining peace and stability in the region. As for what Arctic resources will be utilized in the said lawful and rational manner, the White Paper has proposed several domains within which China can participate. These include: the development of Arctic shipping routes; the exploration for and exploitation of oil, gas, mineral and other non-living resources; the conservation and utilization of fisheries and other living resources, and the development of tourism resources.

According to the White Paper, the development of the new Polar Silk Road will complement the cooperative Belt and Road Initiative that China is actively advancing. China will encourage its enterprises to participate in the infrastructure construction for Arctic shipping routes, while helping to enhance connectivity and promote sustainable economic and social development in the Arctic region. 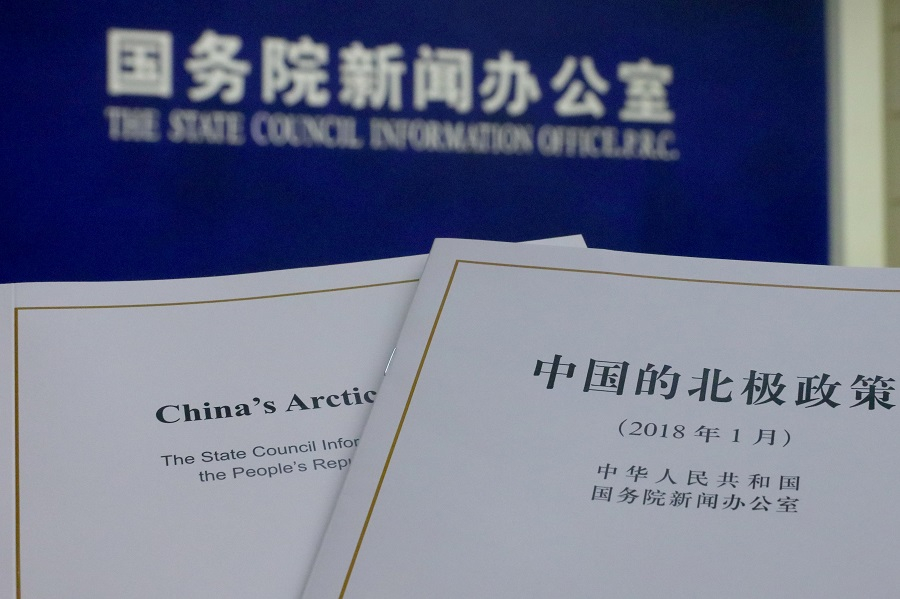 As a major trading nation, China is interested in the transport and logistics potential of the Arctic region. There are three major shipping routes in the Arctic: the Northwest Passage (route through the Canadian Arctic Archipelago that connects the Atlantic Ocean and the Pacific Ocean), the Northeast Passage (route through Russia’s northern waters that connects the Atlantic Ocean and the Pacific Ocean), and the Transpolar Sea Route (at high latitudes of the Arctic Ocean, also called the Central Arctic Passage). It is estimated that due to global warming, the Northeast Passage could become navigable year-round in 50 years. Once these trans-Arctic routes become official shipping channels, they would help ocean-going vessels reduce sailing times from China to Europe and North America and slash costs by 20% to 30%, as compared with ships currently using the Suez or Panama canals. Zhao Long (趙隆), a co-author of the White Paper, spoke candidly of “[China’s] high hopes of discovering new possibilities for international trade and shipping.” 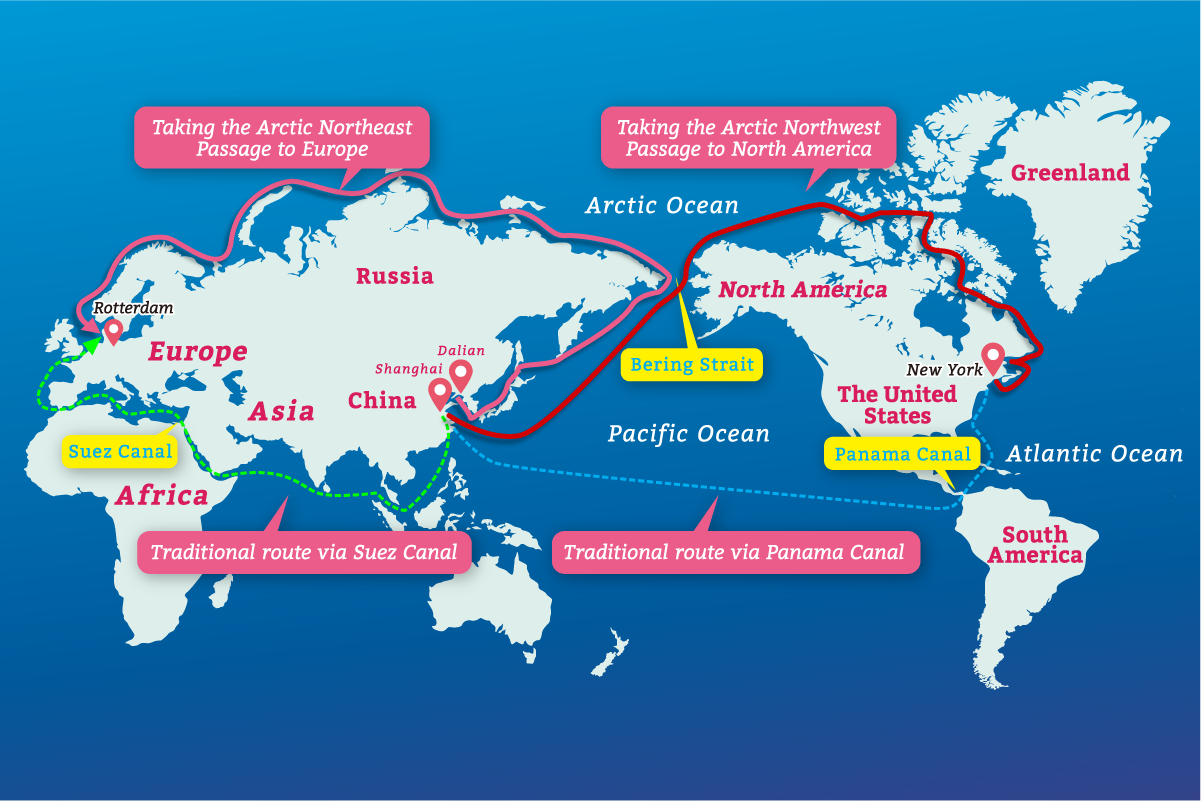 On such a basis, the Polar Silk Road mentioned in the White Paper can provide ample space for development, with the potential to enhance trade exchanges among countries along the route as well as establish a convenient platform for collaborating on Arctic affairs.

Such a Polar Silk Road will, first of all, transform global shipping patterns: as a result of climate change, the trans-Arctic Northwest and Northeast Routes have drawn international attention with their commercial shipping potential. The Polar Silk Road initiative can help promote the development and utilization of Arctic shipping routes through infrastructural development and increasing the number of resupply points along the routes.

Furthermore, chances for collaboration would be increased in other areas. The Polar Silk Road initiative would facilitate visits and exchanges among nations in areas like scientific research, rail transport, logistics and tourism, and ultimately help the Arctic develop into a well-rounded and stable economic system.

In recent years, just as China is increasing its participation in Arctic affairs, there are also growing suspicions among foreign media and academia about the nation’s ambitions, as attested by the promulgation of theories branding China a “threat,” an “environment despoiler” and “resource hungry.” Frédéric Lasserre, a professor at Laval University, expressed his apprehension about China’s presence in the Arctic in his new book China's Arctic Ambitions and What They Mean for Canada.

On the other hand, Ine Eriksen Søreide, Norway’s Minister of Foreign Affairs, has taken the view that Norway welcomes China’s Arctic participation in activities such as global climate change mitigation, shipping and fishing, on the grounds that the Arctic is important not only to inhabitants of the region, but to people of the world as well.

“Throughout the years, China has always played a constructive role in Arctic affairs,” Professor Li Zhenfu (李振福) of Dalian Maritime University asserted. “We’ve made positive contributions.” Examples of China’s contributions include its participation in the work of the International Maritime Organization in formulating new navigational rules for the Arctic. These rules came into force in 2017 and have since played an important role in protecting the Arctic marine environment. Besides, as a steadfast adherent to the principles of the Paris Agreement, China has adopted emission reduction measures that will have a positive impact on the climatic and ecological environment of the Arctic.”

Regarding the role China will play in Arctic affairs, Vice Foreign Minister Kong Xuanyou (孔鉉佑) has responded to queries by underlining that China “will neither overstep nor be absent.” “In short, the fundamental objective of our participation in the development and utilization of the Arctic is to achieve win-win results for all stakeholders and to promote sustainable regional development,” he stated.

As an observer state in the Arctic Council and a permanent member of the UN Security Council, China has the responsibility to participate in the Arctic’s affairs as they play out, and promote peace and security in the region. The environmental changes occurring in the Arctic are inextricably linked to the entire planet’s systems and processes, and thus Arctic governance is an issue that warrants greater participation by the international community. It is fitting and important for China to commit manpower, resources and knowledge to supporting the Arctic’s scientific research and governance.

Why did China’s First White Paper on its Arctic Policy Cause an Uproar? (為什麼中國首份北極政策白皮書會引發強烈反響？) jiemian.com (界面新聞) Jan. 31 2018

Author of the Arctic Policy White Paper: China has no Ambitions to Become a Polar State (北極政策白皮書撰寫者：中國不覬覦成為「北極國家」) thepaper.cn (澎湃新聞) Jan. 27 2018