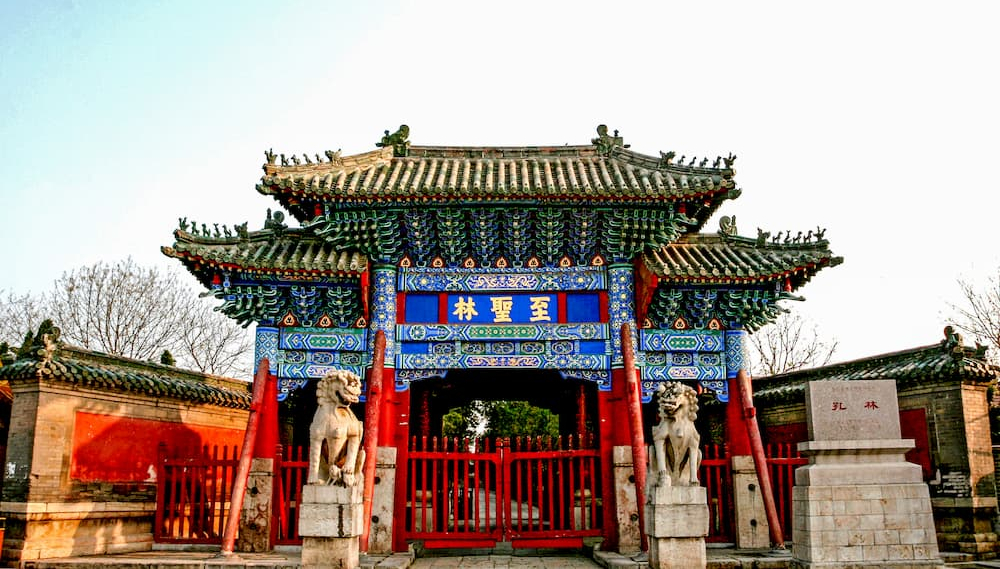 In 479 BCE, China’s most famous thinker—Confucius (b. 551 BCE)—departed from this world forever. To remember this sage, later generations constructed shrines to revere him, and from among all those shrines, the one in Qufu, Shandong province is considered the biggest and the oldest. The Qufu shrine, called the Kong miao or Kong Temple after Confucius’s family name Kong, is connected to the Kong fu or Kong Mansion on the east side, and is one of China’s three largest ancient architectural complexes, along with the Hall of Supreme Harmony in the Forbidden City and the Tiankuang Hall of the Dai Temple on Mount Tai). This shrine was built in the year following Confucius’s death. Having been reconstructed and expanded it now covers over 218,000 square meters, and runs 1,000 meters from north to south. Inside the shrine there are as many as 466 rooms, including formal halls, reception rooms, side rooms, and pavilions; it also has 54 memorial arches and nine courtyards.

As the place for offering sacrifices to Confucius, the Kong Temple is endowed with special cultural significance. The temple’s nine courtyards, yellow and red tiled walls, four-cornered turrets, nails, and dragon pillars are all imitations of the imperial style, which demonstrate the elevated status given to Confucius. The Qufu Kong Temple does not function as the shrine of the Kong family anymore; it is now a national shrine.

The age of the Kong Temple goes back a long way. It is built in a traditional architectural style and is surrounded by towering ancient trees and innumerable inscribed stelae. It can be called one of the world’s oldest museums. The temple incorporates history, culture, architecture, sculpture, painting, and calligraphy all together, while also serving as a repository for all kinds of ritual objects, musical instruments, and dancing equipment.

Although the number of the temple’s stelae does not match those in the cemetery, most of them are exquisitely crafted imperial stelae inscribed with calligraphy of important historic value. The contents on these stelae document the act of revering and making sacrifices to Confucius throughout history, as well as the political, economic, and philosophical concerns of the times. The characters on these stones also reveal the ways that writing technique and style have changed.

Confucius was buried in Qufu, specifically north of the Si River and south of the Zhu River, in what is now the center of the Kong lin or Kong Cemetery. Due to Confucius’s opposition toward lavish funerals, his disciples gave him a simple tomb. There are two stelae in front of the tomb. To the left is the tomb of his son Kong Li (532–483 BCE), and before that is the tomb of his grandson Kong Ji (483–402 BCE). Such a burial layout is called xie zi bao sun (carrying the child and embracing the grandchild). Confucius believed that children should mourn for their parents, and his disciple Zigong (Duanmu Ci, 520–456 BCE) mourned for him for six years.

In the beginning, Confucius’s tomb occupied only approximately one qing (ca. 6.6 hectares). However, due to the consecutive burials of his descendants in the surrounding area, along with the gradual increase in Confucius’s status, the cemetery has expanded to over three thousand mu (ca. 494 acres) today. This huge graveyard of the Kong family is referred to as the “cemetery of the ultimate sage.” It is the largest, oldest, and most complete ancient family burial site in China and the world.

After Confucius’s death, his posthumous title was continuously elevated; Xuan sheng (Sage Xuan) and Dacheng zhisheng wenxuan wang (King Wenxuan of the Grand Achievement and Ultimate Sage) were both honorific references to him. As of today, the last buried direct descendent of Confucius was the seventy-sixth Duke of Yansheng, Kong Lingyi (1872–1919). However, not all Kong descendants can be buried in the cemetery. According to the custom of the family, there are three types of people who cannot be interred in the cemetery: youths under the age of eighteen, criminals sentenced to death, and women from the family who have married an outsider.

The Kong Mansion is the residence of Confucius’s descendants. It is located to the west of the Kong Temple, and has 460 rooms including pavilions, chambers, reception halls, and forehalls. The architecture occupies about 240 mu (ca. 40 acres), and is divided into three courses, namely the middle, eastern, and western. The eastern course contains the family shrine, the academy is in the western course, and the middle course houses the main structure. Since Confucius’s descendants were granted the title Yansheng gong or Duke of Yansheng, the residence has also been called the Yansheng gong fu or Mansion of the Dukes of Yansheng. The holder of this noble title was a powerful aristocrat who enjoyed many privileges. Because of the dukes’ importance, their families were known as the “number one family in the sub-celestial realm.” In the Ming dynasty (1368–1644), this title was again elevated to that of a first-rank official who stood above all other officials; the Dukes of Yansheng were also granted the right to ride a horse in the Forbidden City to accompany the emperor for inspections relating to scholarly matters.

Confucius was an advocate of hierarchy and order, which stressed the importance of everyone in his or her own place and role; this very idea is also displayed at the Kong Mansion. People of different status have different residences. Confucius also stressed the differences between men and women and for this reason the mansion’s front hall and inner residence seem to be of two different worlds: women were not allowed to reach the front hall, and the inner residence was strictly forbidden to outsiders.