About 1,700 years from the time of the beginning of the Xia dynasty (ca. 2100–ca. 1600 BCE), through the Shang (ca. 1600–ca. 1100 BCE), and into the Zhou dynasty (ca. 1100–256 BCE), at the end of the Spring and Autumn period (770–476 BCE) a thinker named Confucius (551–479 BCE) established Ruist thought, also known as Ruist teaching or Ruist learning. (Ruist is also translated into English as Confucian.) Before the Western Zhou (ca. 1100–771 BCE), “Ru” referred to government officials with high status who were in charge of teaching people proper behavior and who were well versed in ancient rites, music, scholarship, and technical skills. Over the ages, developed by generations of thinkers and literati, the term gradually became the name of an ideological system with “benevolence” at its core. The Ruist school is one of the most influential schools of thought. The principles they basically upheld are the ideas of “loving one’s kins” and “honoring the honorable.” They supported rule by means of propriety, virtue, and benevolence. Ruist thought constituted the mainstream intellectual consciousness of pre-modern Chinese society. Until today, Ruist thought remains the gem of the intangible heritage of China, which has had a profound influence on East Asia and the whole world.

Confucius lived in the Spring and Autumn period, when Chinese society was undergoing epoch-making changes. The Zhou court was declining and vassal lords were gaining great power. The Zhou li (Rites of Zhou) that maintained the feudal patriarchal clan system was severely destroyed and society was in chaos. At that time, scholars representing different class interests were extraordinarily active. They formed a major social force and stepped onto the historical stage by writing books and propounding theories. A hundred schools of thought contended and created a flourishing social environment. The grave social crisis caused by irreconcilable conflicts within the society shook the authoritative foundations of traditional culture, resulting in more skepticism about and criticism of traditional culture. Even Confucius had to include the spirit of his time into his ideological system in order to establish a new and harmonious order and psychological equilibrium in social practice.

When Qin Shihuang (First Emperor of Qin, 259–210 BCE) sounded the clarion call of unifying China, Legalist thought suddenly dominated the political realm in China. Orthodox Ruist thought almost disappeared. At the beginning of the Western Han dynasty (early third century BCE), feudal rulers made temporary concessions due to economic depression and the people’s desire for peace. They used the ideas of the Yellow Emperor (d. 2598 BCE) and Laozi (d. 531 BCE) as their ruling thought and tried to achieve the state of “governing by inaction.” During the reign of Emperor Wu (r. 141–87 BCE) of the Western Han, the Ruist scholar Dong Zhongshu (179–104 BCE) advocated “the Grand Unification of the Spring and Autumn” and proposed to “abolish and dismiss members of the non-Ruist schools, and solely honor Ruist learning.” Replacing all other ideological systems, Ruist thought became the fundamental thought of the state, and Ruism officially returned to be the mainstream and orthodox ideology.

After the Han dynasty (206 BCE–220 CE), scholars in the succeeding dynasties revised the Four Books and Five Classics numerous times. Ruism was developed into “arcane learning” a type of metaphysical philosophy during the Wei and Jin period (220–420). The ruling class of Tang (618–907) essentially made Ruism the dominant ideology, with some influence from Buddhism and Daoism. During the Song dynasty (960–1279), Ruism developed into lixue (study of principles). Zhou Dunyi (1017–1073), Cheng Hao (1032–1085), and Cheng Yi (1033–1107) were the founders and Zhu Xi (1130–1200) was the great synthesizer. Not long after its creation, it gained state recognition. During the Yuan (1271–1368), Ming (1368–1644), and Qing (1644–1911) dynasties, the imperial examination tested the contents of Zhu Xi’s lixue which inhibited the introduction of new ideas. It was not until the May Fourth Movement (1919) that the dominant status of Ruism was finally diminished.

Within the tradition of the Ruist thought, the names Confucius and Mencius (ca. 372–289 BCE) appear together like shadows of each other. This is because one is “the greatest sage who epitomizes all thought” (Confucius), and the other is “the second sage” (Mencius), and also because there first was the Lun yu (Analects) followed by the Mengzi (Mencius). Confucius said, “One may have to die in order to achieve benevolence,” so Mencius said, “I choose rightness rather than life.” These principles are complementary. The Shi ji (Records of the historian) says, “Mencius explicated the Shi jing (Classic of songs) and the Shang shu (Classic of documents) and transmitted the ideas of Confucius.” The modern scholar Feng Youlan (1895–1990) compares Confucius to Socrates and Mencius to Plato. Mencius not only inherited but also developed Confucius’ study of the Yi jing (Classic of Changes). Confucius established the categories of benevolence and rightness in his philosophical study of the Yi jing. He further elaborated the category of benevolence while Mencius focused more on rightness. Benevolence and rightness are a paradox, for rightness restricts benevolence, which is the theoretical basis of Mencius’s harsh criticism of Mozi’s theory of “caring for all.” Mencius’ doctrine of “natural goodness” originates from the Yi zhuan (Grand treatise of the Classic of Changes), which says, “The alternation of yin and yang is called the Dao. That which allows it to continue is goodness, and that which brings it to completion is human nature.” Clearly, Mencius grasps the essence of Confucius’ study of the Yi jing.

Chinese culture, with Ruism at its core, is the only culture that has continued until the present day without interruption. Ruist culture, with Confucius as its representative, has spread all over the world. It has influenced neighboring countries and formed a large cultural circle with its great cultural spirit of humanity, benevolence, civilization, harmony, and moderation. This fully proves that Ruist thought not only influenced Chinese civilization, but also significantly influenced the culture of the whole world. However, every form of thought with a long history and wide influence has some shortcomings, and its dregs had to be sifted out at various times. In an age like today, with the economy and culture rapidly developing, Ruist thought with its open-minded attitude is awaiting an infusion of new ideas from the minds of people today in order to produce a new ideology with epoch-making significance. 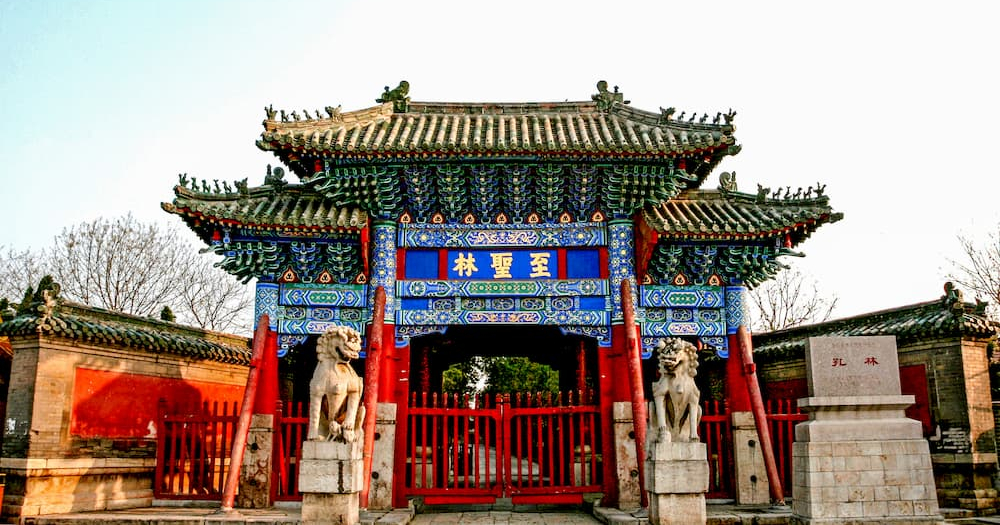 The Studious Spirit of the Chinese