Mount Jiuhua (literally “Nine Flowers”) is located southwest of the capital of Qingyang county in Anhui province. The scenic mountain area measures about 100 square kilometers and is said to feature 99 peaks and 18 vistas. In its heyday, there were 105 monasteries housing three to four thousand monks and nuns. Mount Jiuhua is famous for many towering peaks, each exquisite in form and proportion. Buddhism began to thrive there more than 600 years after the building of White Horse Monastery (the first Chinese Buddhist temple) in Luoyang. The reason for its renown, apart from its naturally blessed setting, should be ascribed to the poet-immortal Li Bai (701–762) and to the eminent monk Kim Gyogak (696–794).

When Li Bai was invited to visit the mountain, gazing from a distance at the nine summits, he was struck by their resemblance to nine lotus blossoms sent down from heaven. He was touched by the scene and sang its praises: “Wondrous Being resolved into two energies, / The numinous mountain took the form of nine blossoms.” This couplet attracted literati of subsequent eras to roam the peaks and compose poetry. Thereupon, Mount Jiuhua gained renown far and wide. Later, Kim Gyogak, a revered Buddhist monk of the Silla Kingdom (57 BCE–935 CE) on the Korean Peninsula, crossed the ocean and studied at Mount Jiuhua. Legend has it that he was the reincarnation of Kṣitigarbha Bodhisattva, whose mission was universal salvation and whose merit was immeasurable. “Every day, thousands of pilgrims came to burn incense in offering.” As an old saying has it: “The renown of a mountain does not lie in its height but in the fact that transcendent beings reside there.” The profound appeal of Mount Jiuhua is ascribed to its seductive natural scenery and its flourishing religious culture. While making a pilgrimage or tour of Mount Jiuhua, one may not only revel in spectacular peaks, grotesque rocks, and seas of clouds suffused in Buddha-light, but also spend time in monasteries and vihāras aglow with candlelight in this mysterious realm of Buddhism.

Mount Jiuhua is one of the four famous Buddhist mountains of China. The other three are: Wutai in Shanxi, Emei in Sichuan, and Putuo off the coast of Zhejiang. These four mountains were once holy sites for enlightenment, each presided over by one of the four great bodhisattvas: Kṣitigarbha, Mañjuśrī, Samantabhadra, and Guanyin. Monasteries have long been numerous on Mount Jiuhua. Despite historical reversals met with by Buddhism, there were 150-odd monasteries, thatched huts, and hermitages in the 1930s, with a significant population of monks and nuns. In the most prosperous period in the Qing dynasty (1644–1911), there were thousands of monastics. Nowadays about 400 monks and nuns regularly reside in the area. Extant monasteries number 82, housing more than six thousand Buddhist statues, which makes it first nationwide among Buddhist sites in this respect. Anywhere along Jiuhua Avenue, in Minyuan Park or amidst mountains you may encounter one of the 82 monasteries, among which the most famous are Jetavana Monastery, Hundred-Year Palace, East Crag Monastery, and Sweet Balm Monastery. Imbuing the landscape with special human significance, they are collectively known as “The Four Monastic Establishments of Jiuhua.”

The highest summit of Mount Jiuhua is Shiwang (Ten Kings) Summit, which measures 1,342 meters above sea level. The second highest is Qixian (Seven Worthies) Summit, measuring 1,337 meters; the third is Tiantai (Celestial Terrace) Summit, 1,306 meters. There are more than thirty peaks with an altitude higher than 1,000 meters above sea level. They rear up amidst a sea of clouds, each poised majestically with its own imposing bearing. Around the steep peaks there are numerous bluffs and rocks which have shapes alluded to in folklore. For example, the “Rock of the Great Peng Bird (roc) Hearing Buddhist Sermons,” located to the west of Tiantai Summit, was named after a legend about the Great Peng bird turning into this rock upon its enlightenment from listening to Kṣitigarbha’s chanting. The Guanyin Rock on the Guanyin Peak was so named because of the rock’s resemblance to Guanyin Bodhisattva getting ready to travel on the wind. Other examples include: the “Wooden Clapper Rock” located to the west of Shiwang Summit; the “Stone Buddha” on Begging Bowl Peak; the “Lotus Blossom Sunbathing Its Belly” and “Monkey Worshipping Guanyin” on Nan Lazhu (South Candle) Peak; and so on. In each case the matching of name to shape is ingenious and intriguing. Furthermore, there are many deep grottos. The Kṣitigarbha Grotto, for example, was named after the legend about Gold Kṣitigarbha’s residing in it when he first arrived in Mount Jiuhua. Others include: Grotto of Gathering Clouds, Tiger Grotto, Lion Grotto, Huayan Grotto, Longevity Grotto, Chaoyang Grotto, Flying Dragon Grotto, Buddhist Monk Grotto, etc. They were all used as cloisters for monks in ancient times because of their secluded and pristine environment, which was most suitable for meditation.

Mount Jiuhua is a treasure-house of items from our historical and cultural heritage. It boasts an abundance of cultural relics, mostly pertaining to the Buddhist religion. There are about 1,300 pieces in the present collection, including precious Sanskrit sutras inscribed on palm leaves, a Ming edition of the Tripitaka, a Qing edition of the Tripitaka, Ming handwritten sutras, a Han wine container (fu flagon) of ink jade, a white jade seal and a black jade seal that were given to Mount Jiuhua by the Qing emperor, a blue porcelain bowl dating to the Yuan era (ca. 600 years ago), a bronze “rapt listener” statue dating to the Ming (ca. 500 years ago), a bronze basin made by the imperial smith during the Xuande reign period (1426–1435), a Xuande incense burner, and so forth. 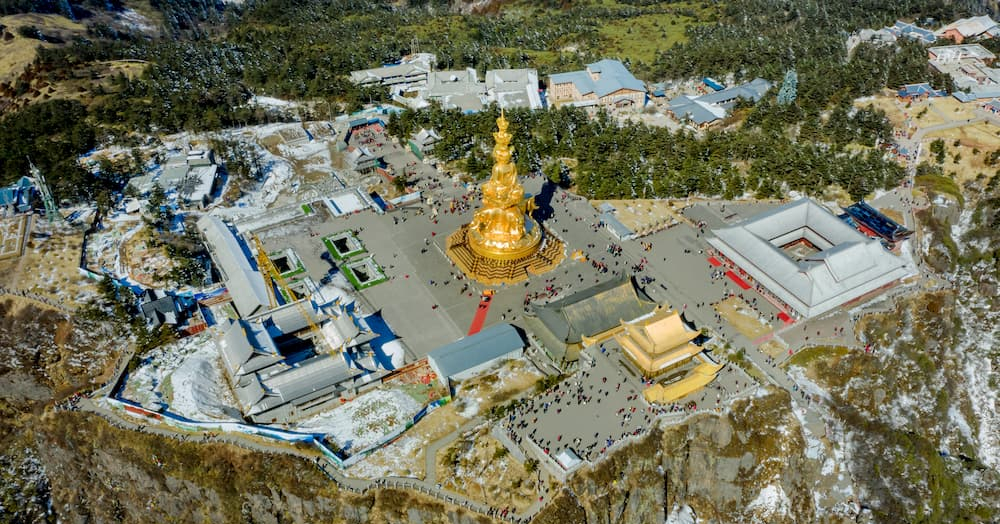 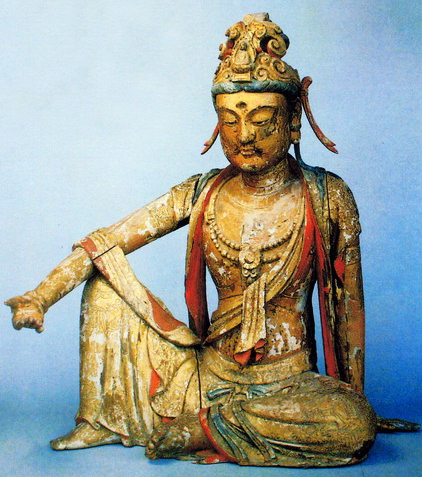