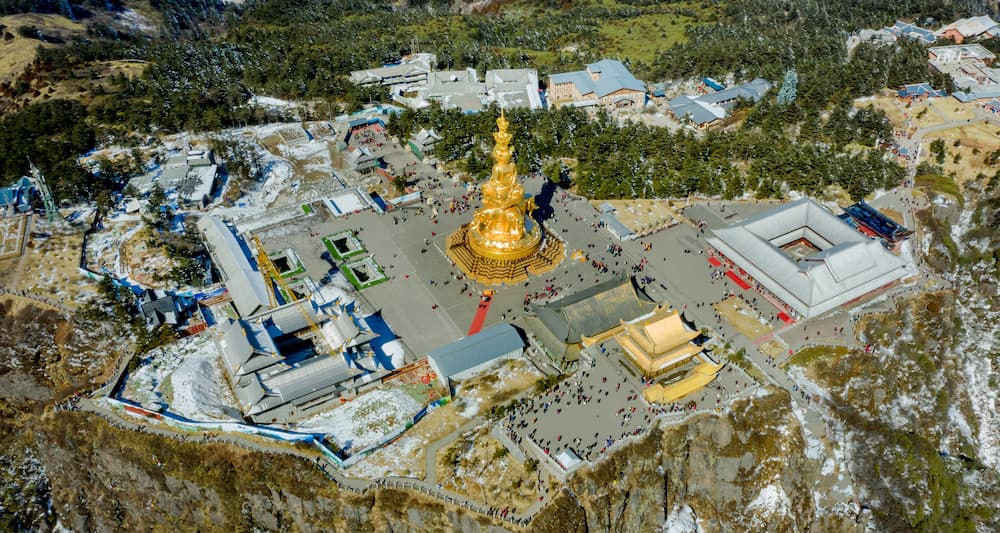 The site of Mount Emei and Leshan Giant Buddha was inscribed on the World Heritage List in 1996 based on its exceptional cultural and natural significance.

Mount Emei, situated in the southwestern corner of Sichuan province, is a legendary mountain with a rich and colorful history. In China and abroad, incredible stories of the mountain have drawn men of letters to compose poetry about the mountain and sing its praises. The Qing dynasty (1644–1911) poet and painter Tan Zhongyue (nd) summarized Mount Emei’s beautiful scenery into ten attractions: Evening Bell at the Holy Monastery, Transparent Clouds at Luo Peak, Spirit Cliff’s Emerald Terrace, Twin Bridges’ Clear-toned Harmonics, Crystal Waters and Autumn Winds, Dawn Rain among the Giant Chun (fragrant cedar), Blue Sky After Snowfall on the Great Plateau, Immortal Abode of the Nine Ancients, Vesper Moon at the Elephant’s Pool, and Felicitous Light on the Golden Summit. Such famous scenic sights as the Emei Golden Summit, the Four Sides and Ten Directions, the Wannian Monastery, the Qingyin Pavilion, the Single Thread of Sky, the Giant Chun Plateau, the Elephant Bathing Pool, the Baoguo Monastery, the Crouching Tiger Monastery, and the Spiritual Water Pavilion make Mount Emei even more admired internationally.

Mount Emei is famous for the many Buddhist monasteries and temples built during the Ming (1368–1644) and Qing dynasties. Some of them have not survived; although the ones that have may not be as magnificent, it is felt that the eight major monasteries and temples—Huazang Monastery, Baoguo Monastery, Wannian Monastery, Elephant Bathing Pool, Qingyin Pavilion, Crouching Tiger Monastery, Giant Chun Plateau, and Xianfeng Monastery—not only represent the architectural characteristics, but also reflect the magnificent and elegant style of that time.

The straight-line distance from Leshan to Mount Emei is thirty-four kilometers. Leshan is well-known for the giant Buddha hewed from the hillside. In former times, people would say that to view “the most beautiful scenery in the world” one had to go to Shu (modern Sichuan) and in Shu the most beautiful scenery was at Jiazhou (modern Leshan). There are two national 5A scenic sites, four 4A scenic sites, one national scenic area, one nature reserve, two forest parks, two wetland parks, one geopark, and one mine park.

The Leshan Giant Buddha is carved from a cliff on the Qiluan peak, Lingyun mountain, which faces the eastern bank of the Minjiang River. When it was carved, it was called the Giant Maitreya Statue of Lingyun Monastery. This ancient seated Maitreya statue, the world’s largest, is just one of the outstanding artistic works carved from the cliffs during the Tang dynasty (618–907). Solemnly sitting bolt upright, the giant Buddha rests both hands on his knees. At seventy-one meters tall, the Buddha is the largest cliff statue in China.

Many stone Buddhist images are carved in the cliffs along the trails leading to the giant Buddha; most were made during the Tang dynasty. To the right of the Lingyun Monastery, there is a thirteen-story brick pagoda sitting on Lingbao peak; its style resembles that of the Small Wild Goose Pagoda in Xi’an. To the left of the monastery, there is a solitary upright peak known as Wuyou, also known as Lidui, which was carved during the Qin dynasty (221–206 BCE). During the Tang dynasty, the Wuyou Monastery was built on top of the peak. It is said that the monastery was the place where Guo Pu (276–324) wrote his commentary to the Erya (The ready rectifier). Even modern poets have praised the giant Buddha: “The entire mountain is a Buddha, and the Buddha is the mountain.” The Giant Buddha scenic area consists of several sites, including Lingyun Mountain, Mahao Cliff Tombs, and Wuyou Mountain. It covers an area about eight square kilometers. These scenic sites are part of the Mount Emei Scenic Area, a national 5A scenic site.

Leshan is one of the most culturally developed areas of Sichuan; it is a place where many prominent talent have emerged, including the Chan (Zen) Master Haitong, who was the founder of the Leshan Giant Buddha; the Song dynasty poet Lu You (1215–1209), and the modern writer Guo Moruo. Guo Moruo grew up in Leshan, and brought further fame to this place.