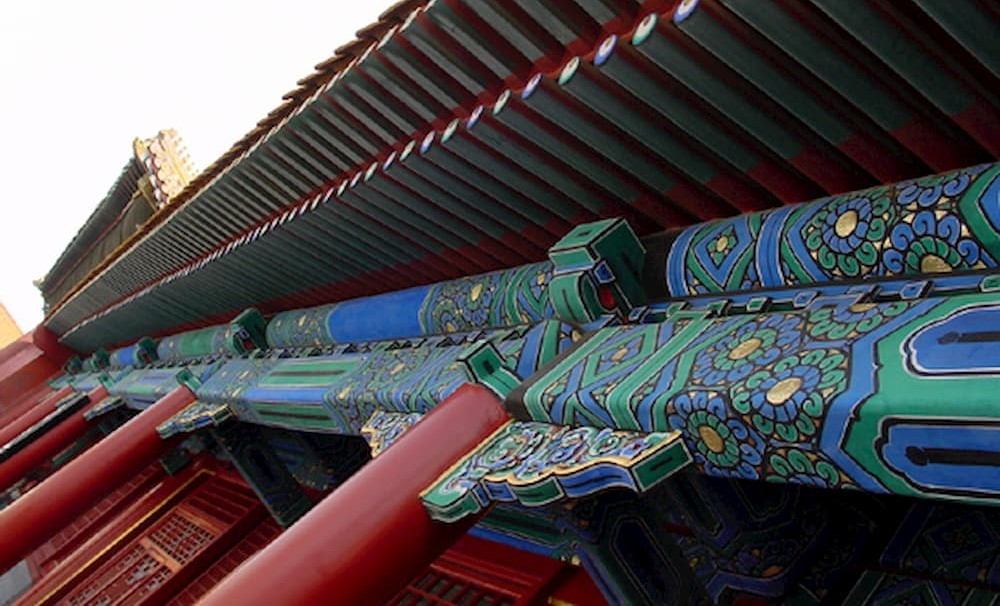 Chinese architecture is a term primarily used to refer to Chinese buildings constructed before 1911 (the end of the imperial era) but it also can refer to later more recent structures with traditional features in ancient Chinese styles. China’s architectural art is notable for its continuity, distinctive building elements and emphasis on balance, diversity, standardization, and symmetry.

In general, Chinese architecture can be classified into two major categories: the official (governmental and imperial) and the popular (non-governmental and folk). By the Ming (1368–1644) and Qing (1644–1911) dynasties official buildings can be further divided into two types: the “grand style” and the “simple style.” The former is characterized by its dougong. Interlocking dou (bearing blocks) and gong (bow-shaped brackets) into dougong or bracket sets was a building technique used to join a structure’s pillars to its roof frame. Bracket sets are a distinct characteristic of Chinese architecture and appear on important buildings constructed under imperial edict during the later dynasties including imperial palaces, gardens, mausoleums, Buddhist monasteries, Daoist temples, sacrificial altars, and ancestral temples. Structures in the “simple style” lack bracket sets and are commonly used in gardens and occasionally also for less important official buildings. Popular architecture includes residential and related edifices such as the homes of the gentry and the merchant classes, ancestral temples and guild halls, as well as some local temples. Scattered throughout China these may display regional characteristics that differ somewhat from the style of official buildings, but as in the case of those, the more important ones were supplied with bracket sets. Also encompassed within the category of Chinese architecture are various structures which are less easily categorized as to style and type although usually constructed under some sort of official order. These include Buddhist pagodas, bridges, and city wall platforms as well within city centers: drum, bell, and other towers.

Chinese architectural art can be likened to an enormous treasure house in which there is stored a wealth of information about China. It illuminates past and present material culture, and in an overall manner reflects and reveals aspects of Chinese life from ancient to contemporary times as influenced by changes in the natural world as well as in material production, cultural knowledge, and social customs. The essence of Chinese architecture is that it is “people oriented”—it is geared to meet people’s material and spiritual needs. And it is expressed in two forms, the external and the internal, which do this. The external refers to a structure’s outside characteristics including its form or type and is associated with particular dynasties, for example: the use of Qin bricks and Han tiles during the earliest imperial dynasties (221 BCE–220 CE); the emphasis on Buddhist temples and pagodas during the Sui (581–618) and Tang (618–907), the stress on ancestral temples and Daoist temples during the Song and Yuan (960–1368); and the prominence given during the Ming and Qing to imperial palaces, parks, private gardens, memorial arches, city moats, mausoleums, temples, altars, and some private homes with special features all of which display typical Chinese architectural features characteristic of their time. The internal refers to the organizing aesthetic principles of Chinese architecture derived from Chinese philosophy and tradition of balance and symmetry, divergence and regularity. Architectural forms may be outwardly imaginative and unique but internally they are arranged in an orderly and rational manner. Individual buildings are standardized, and group buildings are diversified. The layout of Chinese architectural art has an inherent and simple design with regulated structure. The basic spatial unit “jian” (defined by four columns and beams within a structure) or bay is a modular unit which can be singular or multiplied. A building’s artistic form is expressed by versatile combinations of the basic unit, various curved rooflines and decorations. Individual buildings are grouped together to form a courtyard; several courtyards form clusters of residential and other compounds; and larger assemblages of all these buildings make up a city. Isolated single buildings do not constitute a complete artistic vision in Chinese architecture. Architectural artistic effect mainly depends on a combination of buildings which are designed in a sequential order. Regardless of the region, city, or individual, planning and constructing a building must follow the philosophy of Chinese architectural art, ancestral traditions, and art specifications. An ordered sequence is expected according to the geographical location, site area, central axis, north-south direction, mathematical ideas (calculation), spatial imagination (visualization) with attention paid to balance of structure and function, proportion and ratio, the level of light and shade and coordination of color and other visually pleasing elements. Even when a building could not in reality reach symmetric balance because of varied topography, regional customs or other reasons, Chinese builders generally figured out a way to achieve some degree of adherence to this architectural ideal, one derived from traditional ideas such as those associated with yin and yang—balance and harmony along with reconciliation of dark and light, female and male etc., or the mutual complementary of wuxing, the five elements (wood, fire, earth, metal, water).

Chinese architectural history roughly went through the following stages: emergence, development, peak, and continuation. Archaeology has revealed architectural remains in China dating to the Prehistoric and early Bronze Age but it is in the later Bronze Age in the centuries before China’s unification under Qin that architecture begins to emerge. The pre-Qin era (times before 221 BCE) was an incubation period: architectural thinking was rather active, but the environment for creative construction was rather unregulated. During the Spring and Autumn (770–476 BCE), and Warring States (475–221 BCE) periods, each state had its own unique city design and buildings. After the Qin First Emperor (Ying Zheng, 259–210 BCE) unified the realm in 221 BCE he constructed buildings by imitating the palaces of the conquered six states (Qi, Chu, Yan, Han, Zhao, and Wei) at Beiban (North Slope) in his capital of Xianyang. This reflected the diversity of the building styles in the various regions at that time. Subsequently a unified official style developed and spread throughout the empire. It is during the Qin and Han that the foundation of Chinese architecture is laid. This is time of unprecedented grand metropolises, imperial capitals where huge imperial palaces were constructed. The never-completed Qin Epang palace constructed to the south of Xianyang with its enormous front hall in which 10,000 people could sit on the upper level, and five-zhang (ca. 54.68 feet) high flagpoles could be erected in the lower level. A passage from the lower level of the hall could reach the Nanshan Mountain to its south, and the peak of that mountain functioned as the palace’s gate. Grand and imposing, this palace is perhaps the most famous of this era. However, during the succeeding and longer-lasting Han dynasty many magnificent palaces were constructed, notably the Weiyang (Everlasting), Changle (Enduring Joy), and Jianzhang (Palace Building). These remained unmatched in splendor until the Tang dynasty (618–907) when Chinese architecture reached a peak of classical perfection which influenced the building arts of both Korea and Japan. Among the most famous Tang palaces was the Daming (Great Brilliance). Buddhist structures which had been introduced and developed in China in the post-Han era had come to incorporate Chinese architectural features and were also widely inspirational in East Asia. To a large extent the architecture created in the later imperial dynasties is a continuation of what had appeared by the Tang, however, some developments such as the appearance of more upturned roofs and the elaboration of bracket sets should be noted. Still the building layout and construction principles remained essentially the same.