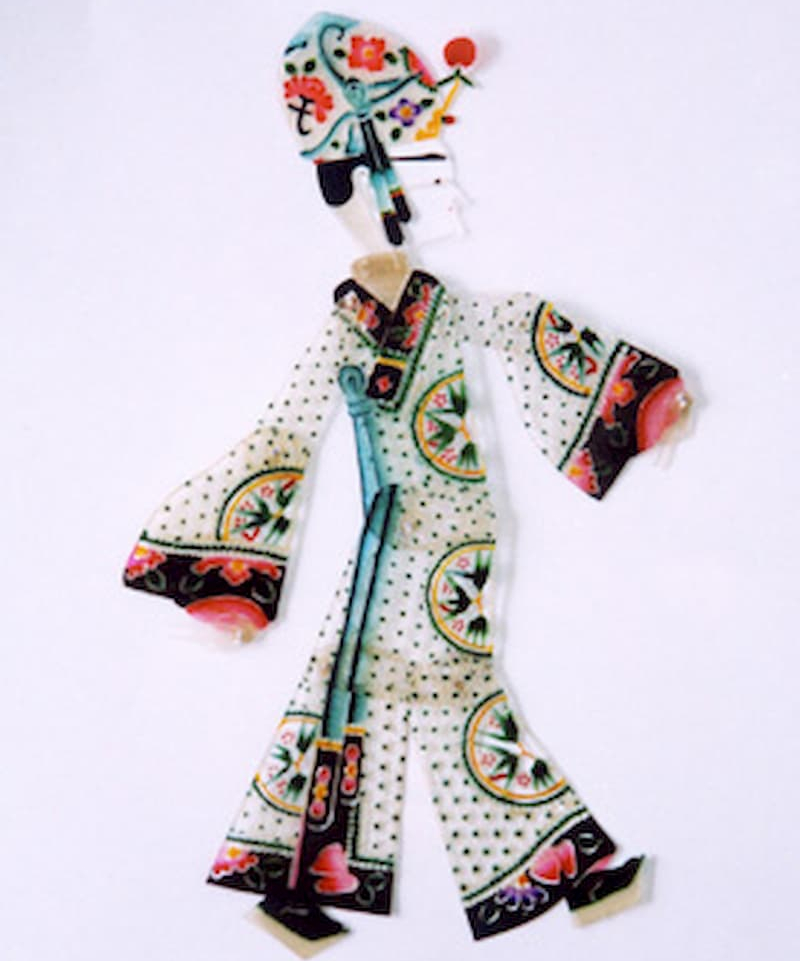 Shadow puppetry is a folk art that integrates manipulation skills, singing, recitation, music, drawing, audio-visual effects, as well as stories. The distinctive shapes and styles, and its rich and varied repertoire make it unique among Chinese folk arts. Shadow puppetry has been appreciated by museums and collectors around the world.

The origin of shadow puppetry is closely related to religion; some would even say it arose from it. Historians have noted that the alchemist Shaoweng (d. 119 BCE) set up a tent and played with shadows to call back the spirit of Emperor Wu’s (r. 141–87 BCE) deceased wife, Lady Li. Although this is merely legend, and “setting up a tent and playing with shadows” is not a formal shadow puppet show, it had all the makings of the shadow play.

By the late Northern Song (early twelfth century), shadow puppetry was already quite popular, and commonly performed in marketplaces. During the Southern Song period (1127–1279), professional artisans specializing in carved shadow puppets emerged around the capital, Lin’an. There were also troupes that were known for producing shadow plays, as well as numerous outstanding performers who provided entertainment for everyone from the imperial family down to the lowliest commoners, even soldiers. Shadow puppet shows were an important part of various festivals and celebrations. Whether in rural or urban areas, these shows provided entertainment while people propitiated the gods, celebrated their promotions in the civil service, or simply feted people for their birthdays and weddings.

In the late Qing dynasty and the early Republican period (early twentieth century), shadow puppet shows were performed all over China. Various schools and types of shadow shows developed and, in general, they fall into seven categories: Shaanxi-Shanxi, Luanzhou, Shandong, Hangzhou, Sichuan-Hubei-Yunnan, Hunan-Jiangxi, and Chaozhou. Each has its own distinctive features.

The exquisite carving of the leather shadow puppets, their fastidious construction, the seamless integration of singing and performing, and the special action effects distinguish shadow puppetry from other performing folk arts. Shadow plays have their own unique performance style. The shadow windows, the arrangement of lighting, sets, and props, the music and stage display, as well as the way the shadow puppets perform on stage are all elements that reflect the artistic charms of shadow puppetry.

The leather shadow play was the earliest Chinese performing art introduced to the West. Although, shadow play is historically linked to religious activities in most countries, the Chinese shadow puppetry had become a popular entertainment when it was introduced to Europe and the U.S. After being introduced to Southeast Asia, South Asia, the Middle East, and European countries, the show was enriched by strong local characteristics.