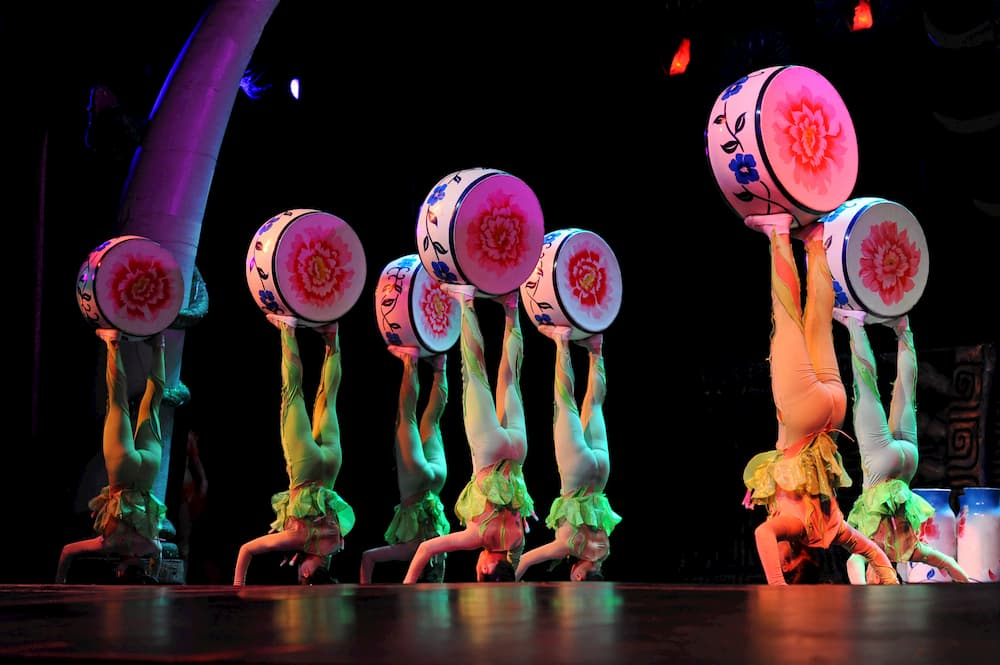 In ancient times, “acrobatics” were known by the term “miscellaneous games.” This performing art with its emphasis on stunts performed with outstanding talent has a long history and a rich content. The routine acts included bare-handed tumbling, flips, wrestling and falling skills, along with various types of juggling (including with the feet), balancing, trick-cycling, and aerial work. Illusions were also part of the show along with more circus-like acts and animal taming. In modern times, unique clown antics are also an important part of an acrobatics show.

Chinese acrobatics has a long history. The numerous acts, rich in traditional cultural philosophy of the East, embody the Chinese humanistic mentality of “using a tool as the vehicle of the Way.” Characteristics of the art include: the emphasis on strength, the waist, legs, and the top of the head; impeccable balance while walking the tightrope; the unexpected illusion of producing something out of thin air and making it disappear again; juggling heavy and light objects with the feet (and making it even more difficult by putting objects on the head or both legs); the combination of unusual strength and agile tumbling skills such as making a pyramid.

There are nearly one thousand different stunts in Chinese acrobatics and more than two hundred types are commonly performed. In general, they are based on strength, physical prowess, juggling, aerial performance, or magic. There are marvelous variations involving imitation of images and sounds, and animal-taming; humorous acts and clown skits also make up part of the show.

Magic, or illusions as it was known in ancient China, went by the term “conjuring arts” during the Ming (1368–1644) and Qing (1644–1911) dynasties. A long time ago, magic was often treated as if it were witchcraft or sorcery; now, modern magic is considered a performing art. The performers create amazing artistic effects by relying on scientific design, ingenious planning, and outstanding performance.

In the earliest times, acrobatics were indistinguishable from dances and music. They were part of the dominant entertainment culture at that time. Before the Han dynasty (206 BCE–220 CE), acrobatics were in a gestational period and little information has come down to later generations. Acrobatics were greatly appreciated by the imperial courts of the Han and Tang (618–907) dynasties. Beginning in the Song (960–1279) and Yuan (1271–1368) dynasties, when drama was becoming more popular, acrobatics were neglected and driven into the street. Acrobats were performers and had a low social status. After a while, something happened that brought the acrobats to notice once again—the celebrated ancient dances from the Han and Tang times—Ba-Yu, Qi pan (Seven plates) and Nichang yuyi (Rainbow skirt and feather coat) which had been lost were discovered to be still preserved among the traditional acrobats.

Acrobatic arts became a vehicle of cultural exchange among countries because they were universally appreciated and their body language crossed linguistic boundaries. From the Han to the Song dynasties, the imperial courts entertained foreign envoys with variety shows and circuses. During the flourishing days of the Han and Tang dynasties, music, dance, and acrobatics were introduced to China via the east-west Silk Road. The influence came from far-afield—the Western Regions, even India, the Eastern Roman Empire, and South Asian kingdoms all dispatched acrobats as envoys to establish friendly relations with China.

In the late Qing dynasty and early Republic era (early twentieth century), international exchanges were pioneered by non-governmental volunteers. After the People’s Republic of China was established, numerous acrobatic groups, organized by the state visited foreign countries to promote international cultural exchange. Premier Zhou Enlai (1898–1976) personally organized the visits of acrobatic groups to Eastern European and West African countries in the early years of the PRC. Acrobats became messengers spreading friendship and Chinese culture. Along with reforms and the open-door policy in recent years, acrobatic groups are the most influential and the most frequently selected of any arts group to visit foreign countries. Acrobatics have been accorded the honorary title—“Model Art.”