The far side of the moon -- the lunar hemisphere that always faces away from Earth -- used to be a place of mystery where no spacecraft had ever touched down and lived to unveil the mystery. Not, that is, until China’s Chang’e 4 lunar probe made mankind’s first successful landing there and embarked on an historic mission of discovery. With the help of communication relay satellite Queqiao, Chang'e 4 was able to establish communications with Earth. This enabled its controllers to coordinate the operations of the moon lander and its rover, Yutu 2, to carry out scientific surveys in unchartered lunar territory.

The far side of the moon is an enigmatic and lifeless landscape devoid of water and atmosphere, where weather phenomena - clouds, rain or even a breeze - are non-existent, and sound is literally unheard of. Of the legendary celestial palace and Wu Gang (吳剛) -- the mythological woodcutter on a never-ending mission to cut down a magical tree -- no sign can be found. Guess with the bleak scenery, anyone sensible must have left long ago. Compared with the moon’s near side, the far side possesses more hills and plateaus, with vast expanses of regolith -- loose soil and rock fragments -- untouched by human foot.

On January 3, 2019, a visitor finally arrived in this desolate land. As it drifted down gently, it extended photovoltaic panels from its golden shell at a leisurely pace, and took a photo of the lunar landscape before it. The photo was immediately transmitted to a blue planet 380,000 km away. This visitor, Chang'e 4 (嫦娥四號) was a probe sent from China and mankind’s first spacecraft to land on and explore the far side of the moon. What was its mission and what secrets did it uncover? Let’s first examine the Chinese Lunar Exploration Program (CLEP) also known as the Chang'e Project (嫦娥工程) which started all of this. 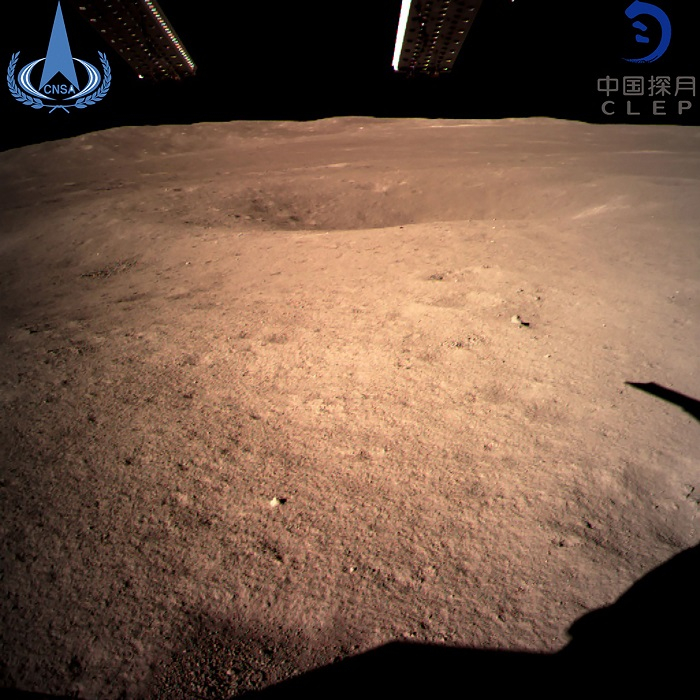 Program of the moon goddess

China had begun to evaluate the necessity and feasibility of exploring the moon as early as 1994. After 10 years of study, the lunar exploration program was approved and named the “Chang'e Project” after Chang’e (嫦娥) a goddess who was said to have journeyed from Earth to the moon. The name was thought appropriate to show China’s determination in accomplishing the same feat. According to the plan, the project entailed orbital, landing and sample-return missions. In layman’s terms, a probe would orbit and then make a soft-landing on the moon, where its rover would conduct automated scouting and surveying. Samples collected would then be sent back to Earth robotically.

After three years of research and development, China launched Chang’e 1, its first lunar probe, in 2007 to circle and survey the moon. The mission’s main purpose was to generate a 3D map of the surface of the moon, analyze the abundance and distribution of potentially useful elements on the moon, and survey the features of lunar soil and the space environment between Earth and the moon. Chang’e 1 accomplished all the objectives, marking the successful completion of the first phase of CLEP.

In 2010, the launch of the orbiter Chang’e 2 heralded the second phase of the Chang’e project. It allowed more scientific surveys to be conducted and was an opportunity to put some key technologies to test. After completing its mission objectives, the probe left the lunar orbit and became an artificial asteroid orbiting the sun.

The true star of the second phase, however, was Chang’e 3: launched in 2013, it orbited the moon, underwent powered descent and successfully landed at a pre-selected spot on the near side of the moon. The mission accomplished major breakthroughs in key technologies enabling a soft landing, lunar surface exploration by rover as well as deep space tracking, control and communication. It carried out surveys of lunar surface topography, geology, material composition and potentially useful resources. This concluded the second phase of CLEP.

Chang’e 4 was originally built as a backup for Chang’e 3. After its predecessor’s success, scientists at the China National Space Administration unanimously concluded that the next mission should focus on exploring the far side of the moon rather than collecting lunar samples from the near side, as the former, being the first such endeavor by mankind, would be of greater significance. Thus, Chang'e 4 mission marked the beginning of CLEP’s fourth instead of third phase. 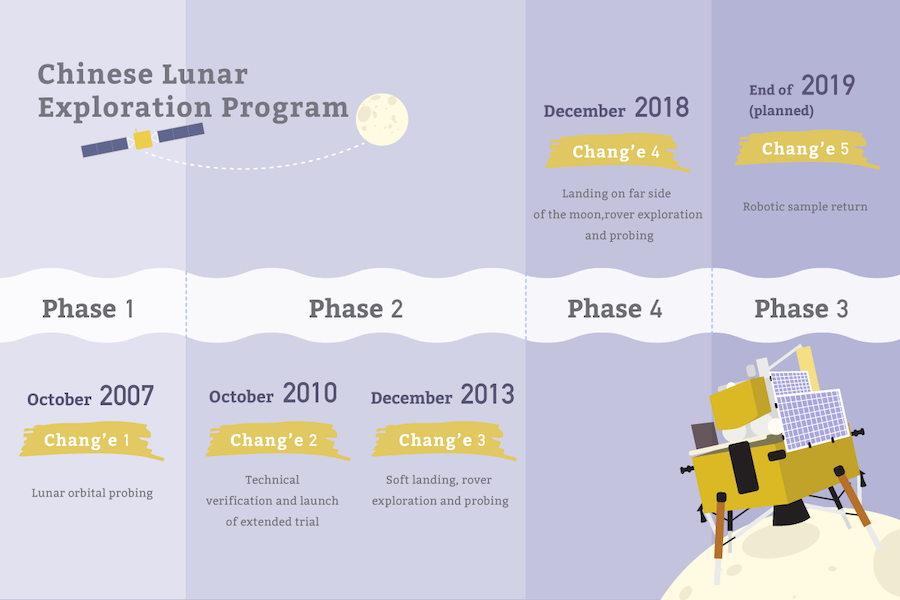 Voyage to the far side of the moon

The moon continuously waxes and wanes, but have you ever noticed that we keep seeing only one side of the moon, while the other half of the moon is always turned away from us? What could be the reason?

The gravitational pull between the Earth and the moon, known as tidal forces, anchors the moon to Earth so that that the moon orbits Earth in about the same time it takes to rotate on its own axis. Thus the same side always faces Earth. This astronomical phenomenon is called “synchronous rotation” or “tidal locking.” 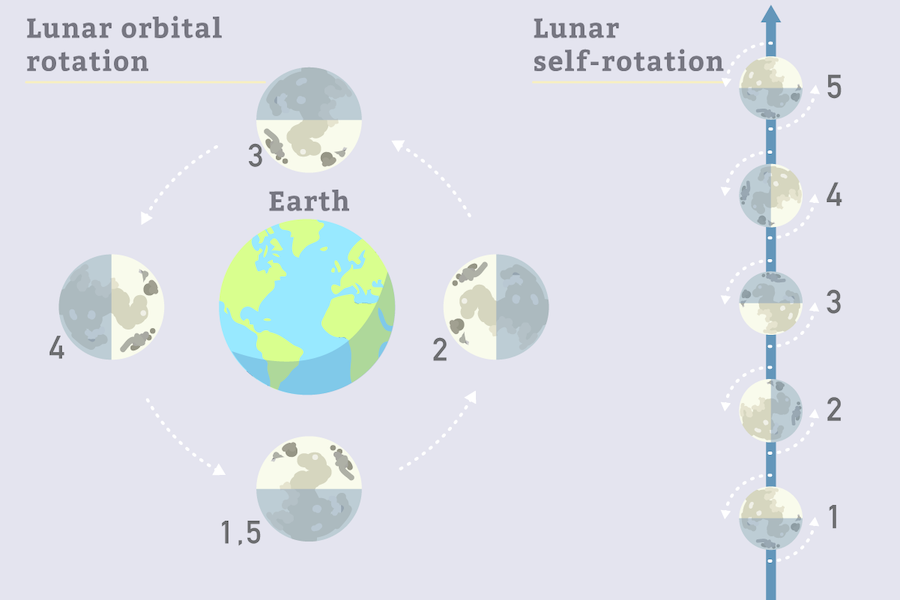 The landing site on the far side of the moon selected for this particular mission was the Von Kármán Crater. Formed over 4 billion years ago, it is the oldest impact crater on the moon. Its geology and mineral composition are of great scientific research potential. Another special feature of the far side of the moon is that it is shielded from interference from low-frequency electromagnetic waves from the Earth, and is an ideal place to monitor low-frequency radio waves, which would allow scientists to learn about solar eruptions and even catch echoes of cosmic signals from the early stages of our universe. To conduct such research on the far side of the moon is an opportunity about which most scientists and astronomy enthusiasts can only dream. Paul Rincon, science editor of the British Broadcasting Corporation website, said that Chang’e 4’s successful landing on the far side of the moon would provide insights into the history of the moon, fill a gap in astronomical observation, and allow scientists to understand more about the lunar radiation environment.

Joseph-Louis Lagrange (1736-1813) was a French mathematician who, in collaboration with Swiss mathematician Leonhard Euler, discovered that when a cosmic body orbits another cosmic body, there are five points in space where the net gravitational pull from the two large bodies will enable a third small body to remain stationary. 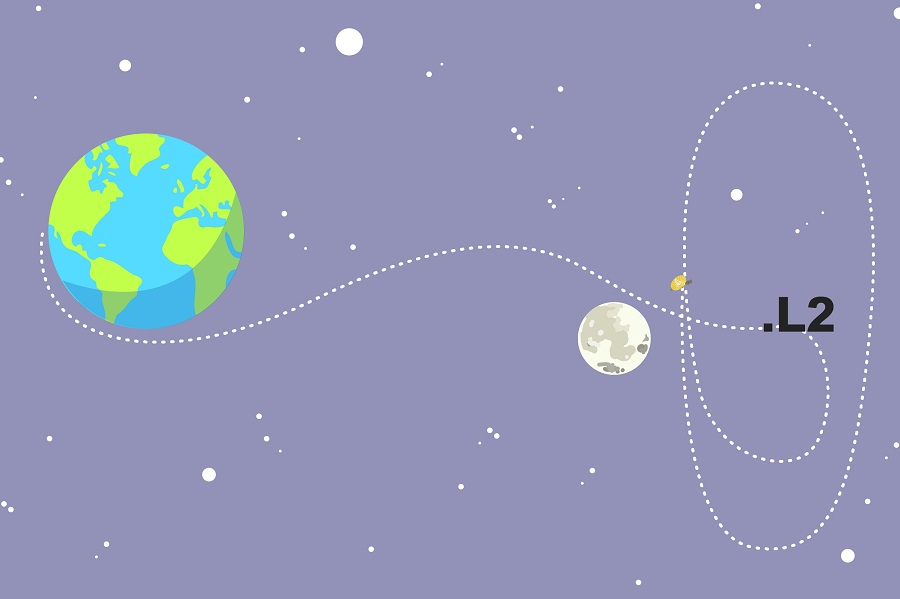 On December 8, 2018, the Chang’e 4 probe was launched into space aboard the Long March 3B (長征三號乙) rocket. It conducted “space braking” near the moon, then entered an elliptical lunar orbit with the perilune at around 15 km. On January 3, 2019, the Chang’e 4 landed successfully on the Von Kármán Crater situated within the South Pole-Aitken basin on the far side of the moon. The lander and its cargo, the Yutu 2 rover, then separated according to plan. All probing and rover exploration data was transmitted back to Earth via the Queqiao communication relay satellite. The Chang'e 4 probe was equipped with 13 payloads including four scientific projects in cooperation with Germany, Sweden, the Netherlands and Saudi Arabia, as well as with the lunar microsatellite Longjiang (龍江號). The main objectives of the mission were to survey the topography of the landing site, the surface and near-surface structure and material composition of the roving area, and the space environm ent at the far side of the moon in general. It would also conduct laser-ranging technology experiments beyond the Earth-moon distance as well as biological science demonstrations on the lunar surface.

On January 11, the China National Space Administration released a statement announcing that both the lander and lunar rover were carrying out their work as planned and had snapped photos of each other. Transmission of images and data was working smoothly and the data collected by scientific payloads could be downloaded without a hitch. This fulfilled one of the project’s specific targets. Moving on, the project entered the scientific probing phase.

A well-deserved rest after a hard day's work

As night fell over the far side of the moon, the Chang’e 4 lander and Yutu 2 rover entered lunar night sleep mode on January 12 and January 13 respectively. We understand that humans require rest, but why do machines also have to rest?

A balance between work and “down-time” is a must for surviving the lunar environment, as both Chang'e 4 and Yutu 2 are powered by solar energy that is only available during the lunar day. Due to self-rotation, the moon, like Earth, possesses a day/night cycle determined by when it faces the sun. It takes the moon 27.32 days to complete a self-rotation, so the moon’s lunar day lasts for the equivalent of 14 Earth days. Once the sun sets and darkness falls, the lunar surface temperature quickly plummets to minus 180 degrees Celsius. Without solar power, most scientific payloads aboard the Chang’e 4 and Yutu 2 have no choice but to cease their probing activities and enter sleep mode. For Yutu 2, an additional nap around noon in the lunar daytime was required. To help the lander, rover and their scientific payloads withstand the freezing lunar nighttime, radioisotope thermoelectric generators had been installed in the two vessels as nighttime heaters to ensure that the temperature did not fall below the equipment’s storage temperature range.

Yutu 2 and Chang’e 4 were roused from sleep automatically on January 29 and January 30 respectively. Exiting sleep mode, they went through the default procedure of powering up and starting operations. Thus far, both have survived the extreme temperature differences and are carrying out their lunar surface exploration and scientific probing tasks. It is anticipated that they will continue to follow the pattern of “rising” with the sun and sleeping once it sets.

However, even as Chang’e 4 and Yutu 2 slumber, they are attracting consistent interest from the people of Earth: the National Aeronautics and Space Administration (NASA) of the United States expressed interest in using their Lunar Reconnaissance Orbiter (LRO) currently orbiting the moon to observe the Chang’e 4 probe and share its findings for scientific research. Scientists from both China and the United States have been in close communication and have exchanged relevant scientific data over the matter. The scientists from the United States also voiced hopes that China would extend the operational lifetime of the Queqiao relay satellite, as it would be of use to the United States’ future lunar landing missions.

In response to such requests, Li Guoping (李國平) secretary-general and spokesman of the China National Space Administration, said China attaches great importance to international collaboration and exchanges in the international aerospace scene, and is willing to share the project’s scientific payload data with aerospace organizations, scientific research institutes and space exploration enthusiasts worldwide. The international community is also welcome to use the Queqiao relay satellite after its current mission for further scientific research work.

Currently, the China National Space Administration has confirmed that the fourth phase of CLEP will consist of three more missions. Their objectives include collecting samples and running a comprehensive survey at the lunar south pole, conducting more in-depth experiments on the lunar surface, and exploring the possibility of establishing a lunar research base. At the end of 2019, Chang’e 5 will land on the moon to conduct a robotic sample return mission. Hopefully, rather than spelling the end of the project, it will herald more Chinese space probes bound for the moon and other planets to leave their mark on the cosmos - and on the ongoing saga of mankind’s passion for space exploration.

Queqiao Calling Chang’e 4: I’m in position and can see both the back of the moon and Earth, come on over! (鵲橋呼叫嫦娥四號：我已到站既能看到月背又能看到地球，等你！), jiemian.com, June 17, 2018

Chang'e 4 and Yutu 2 will be Awakened at the End of January to Start Lunar Survey Work (嫦娥四號與玉兔二號預計將於1月底被喚醒開展探測工作), thepaper.cn, Jan. 28, 2019