In March 2016, human and machine locked horns for dominance in a historic five-game Go match. On one side was AlphaGo, an artificial intelligence (AI) program developed by Google subsidiary DeepMind; on the other was Lee Sedol, a Korean nine-dan player and the reigning world Go champion. The two dueled fiercely over five games. Ultimately AlphaGo emerged as the victor after beating the world champion four games to one, fueling worries that AI is on course to replace human beings altogether.

Next was a battle between AI programs: at the Tencent World AI Go Competition (騰訊世界人工智能圍棋大賽) held in June and July 2018, top AI programs developed by various countries including China, the United States, Japan and South Korea vied for supremacy in the game of Go. In the end, the crown was claimed by the Chinese AI program Fine Art (絕藝) with straight wins over the other contenders. Two years has passed since then. AI is increasingly viewed as a great leap forward in human creativity, and is expected to bring about revolutionary changes. So how is China’s AI industry faring in this ever-intensifying global race in technological innovation?

Though AI is now a household term, a consensus about its definition has yet to be reached. For lay people, AI is the study of how human intelligence functions and how machines can imitate human thinking and behavior, and thus solve problems by mimicking a human brain. Thanks to the leaps and bounds made in computing power and algorithms enabling high-performance data processing, AI has drawn global attention for its potential to shape the future development of numerous industry segments, while expanding into applications in manufacturing, daily life, social governance, national defense and other areas. In recent years, AI development has become the rage in China, leading to the formation of a relatively sophisticated industrial chain complete with a foundation level, a technology level and an application level. Already, it is influencing people’s daily life. 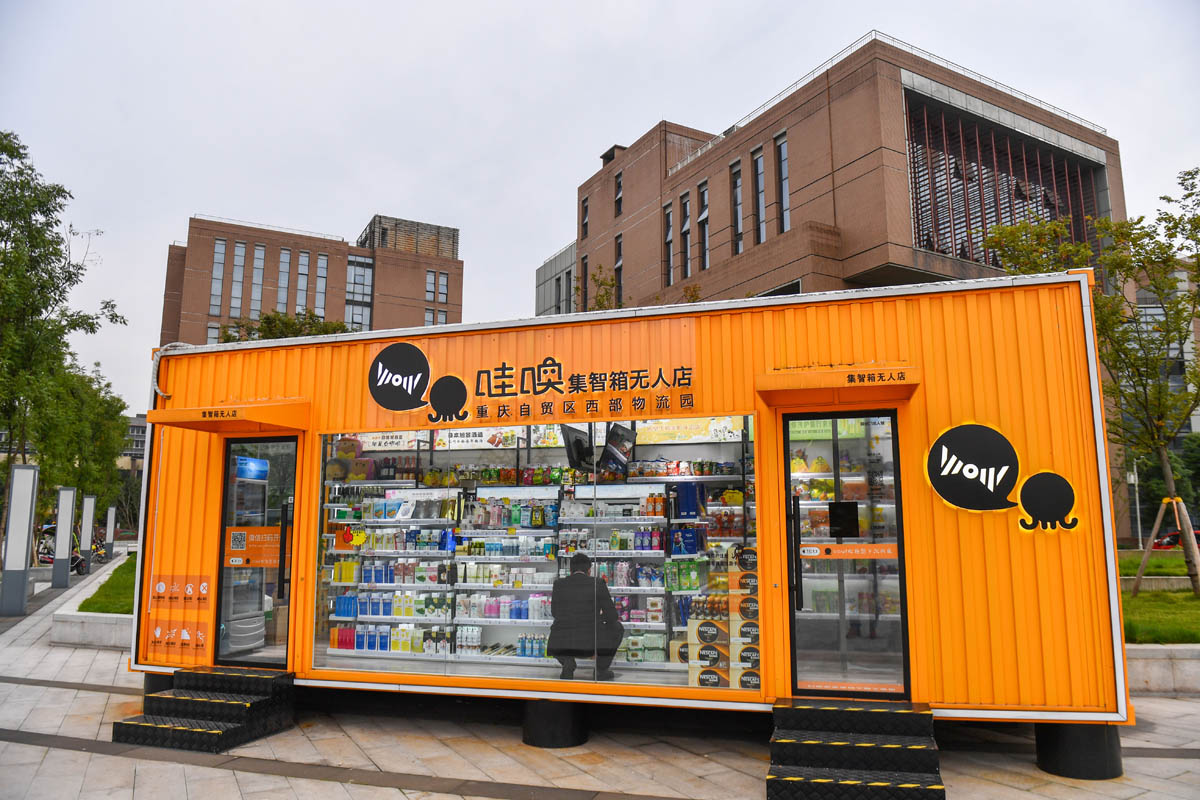 The foundation level supplies computing power - an important yardstick for gauging the level of AI development - via equipment and technologies like AI chips, sensors, big data and cloud computing. Among these, AI chips have a particularly high technology threshold. Currently, this level is dominated by international technology giants like Nvidia, Mobileye and Intel.

The Chinese AI industry’s capability at this level is relatively limited. Its AI chip industry is still at a nascent stage, so there are fewer companies that focus on the technology. For the time being, the industry is heavily dependent on imported high-end chips. Startups like Jingjia Micro (景嘉微) and Cambricon Technologies (寒武紀科技) are the current industry pioneers. As the domestic AI chip industry matures, it is anticipated that computing power will increase accordingly and costs will fall.

The heart of the AI industry, the technology level, makes use of computing platforms and data resources hosted by the foundation level to build machine learning models and provide training to AI on pattern recognition. It develops application technologies that cater to different industries, linking the foundation and application levels.

In China, substantial progress has been made in visual computing, natural language processing and machine learning. In the visual computing field, research has mainly focused on still and video image recognition, an area pioneered by Baidu (百度) Megvii Technology (曠視科技) and DeepGlint (格靈深瞳). The second field, natural language processing, is developing the technology that enables machines to recognize phonetics and semantics in human speech via analyzing vast amounts of sample data. Most Chinese enterprises in these fields are striving to raise the accuracy of recognition by accumulating data and technology via different platforms, hardware and software. In this regard, companies like iFlytek (科大訊飛) AISpeech (思必馳) and Unisound (雲知聲) boast a general recognition success rate of around 95 percent. The third field, machine learning, is devoted to the development of technologies that enable machines to simulate or implement human learning behaviors. As it requires significant investment, the market model is mainly dominated by internet giants with deep pockets. 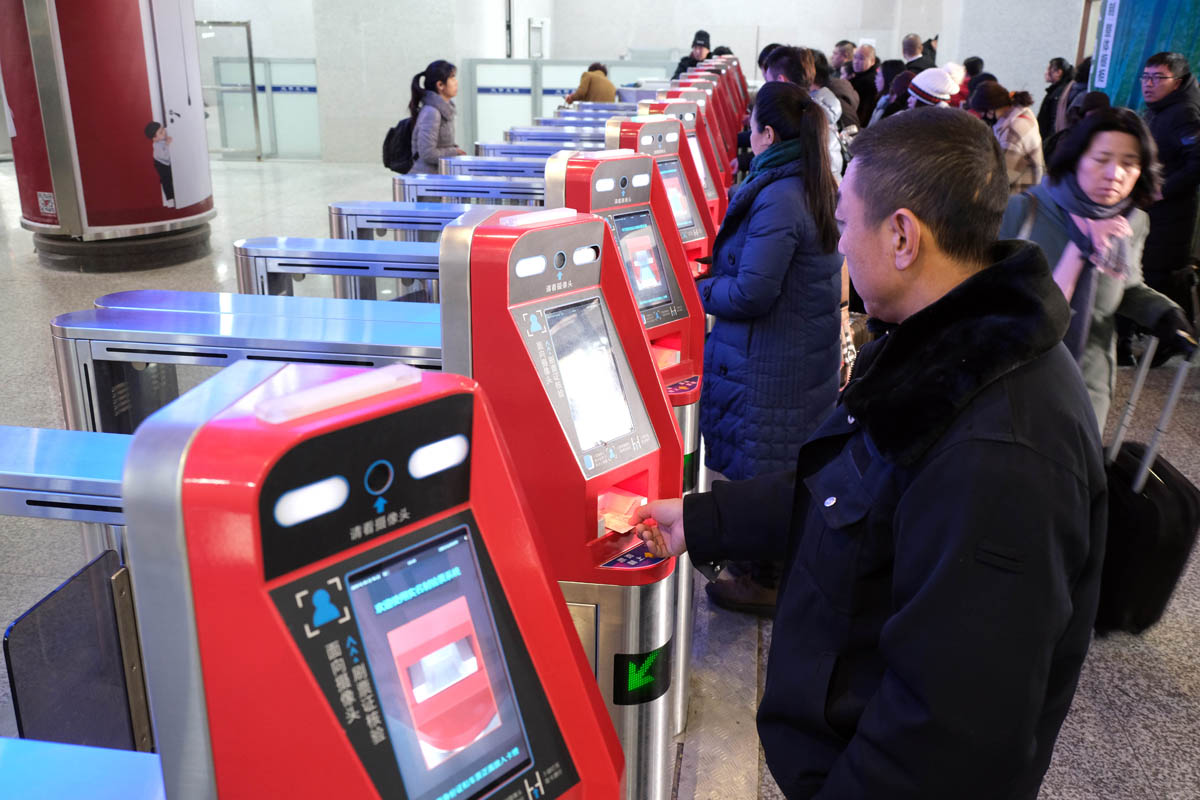 So, where does this never ending quest for improved algorithms, higher computing power and state-of-the-art technology lead us? The ultimate purpose is, of course, the rapid supply of products and solutions designed for use in specific scenarios. AI is being incorporated in an ever-increasing variety of products including smart speakers, smart robots, drones and self-driving vehicles. These are finding wide application in a range of industries including medical care, finance, security and home improvement.

The market for smart speakers, an intelligent voice interaction system that can play music, make online purchases and control home appliances through the users’ voice commands, has seen particularly strong growth. In China, a sizable market for smart speakers is beginning to emerge. According to a study by the analyst firm Canalys of the smart speaker market in the third quarter of 2018, Amazon came first in global sales, followed by Google. Major Chinese brands Alibaba Tmall (阿里巴巴天貓) and Xiaomi (小米) with market shares of 11.8 percent and 7 percent respectively, claimed third and fourth places. This was in stark contrast to the figures from the same period in 2017, which saw Amazon and Google holding 99 percent of the global market share. 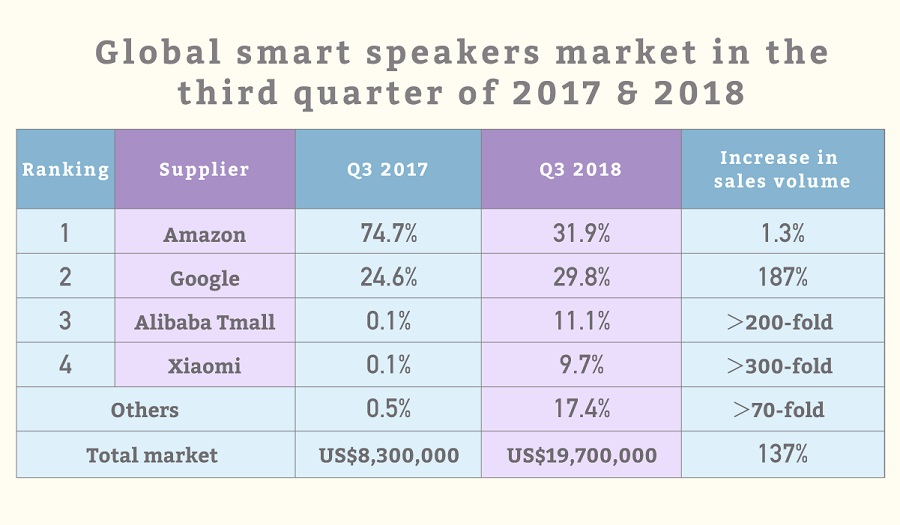 Smart medical care is also a burgeoning field in China. In the past, doctors used their medical expertise to interpret their patients’ symptoms and test results, and thus diagnose the nature and course of ailments. Now, as a medical diagnosis aid tool, AI can “learn” the professional medical knowledge required, “memorize” a vast number of medical histories and cases, help review medical images and establish a smart system for medical treatment, in effect becoming the doctor’s “super assistant.” In less developed areas, obtaining a medical appointment can be a challenge as doctors are few and far between. With rapid population aging, this dearth of doctors and their unequal distribution will only increase. The application of AI in this sector can be a viable way to improve the affordability and accessibility of medical services within underserved populations. 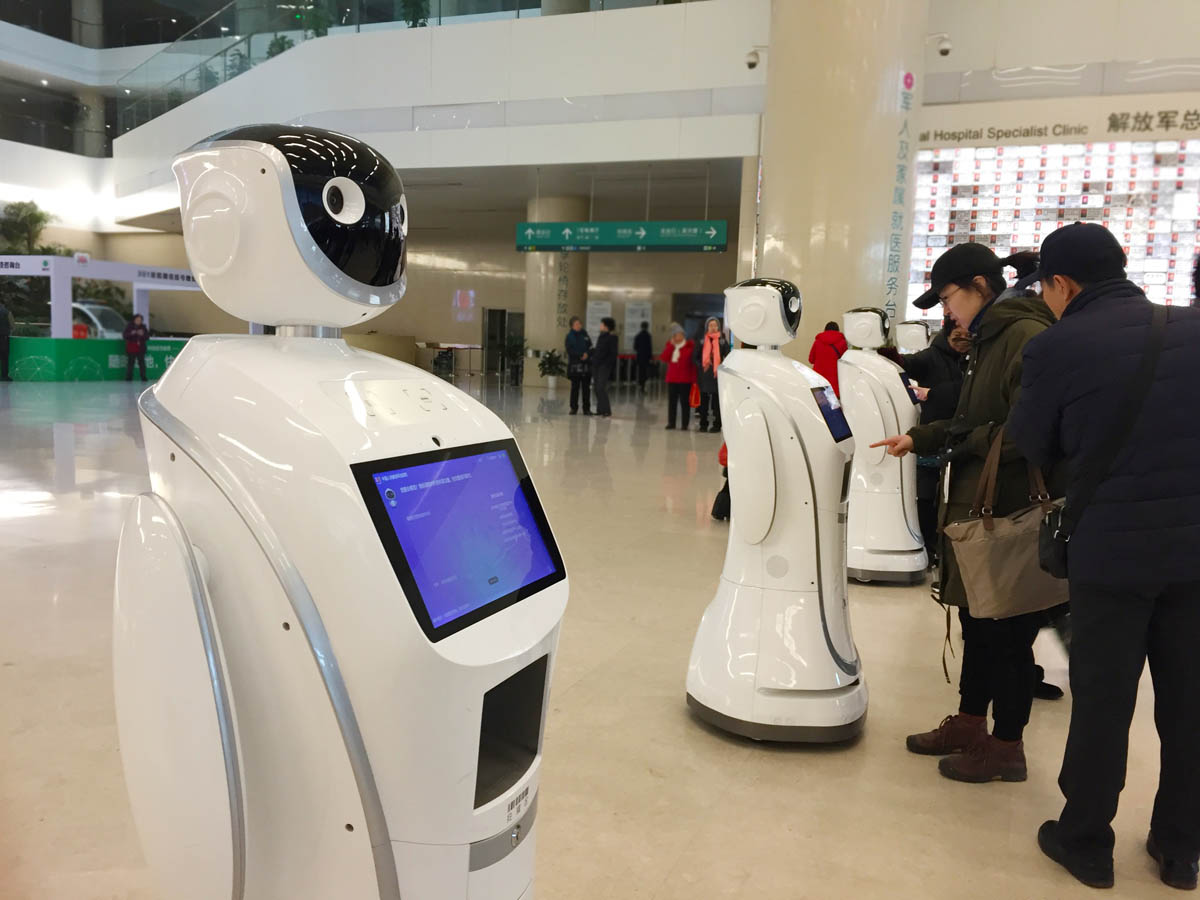 Currently, China’s largest corporations, represented by Baidu, Alibaba, and Tencent (also referred to in the industry as BAT) have made investments at all three levels of the AI industry - foundation, technology and application. Smaller startups typically focus on applied research and development in a sub-category of AI technology, to better provide professional solutions to particular industries as specialists in their field. Nevertheless, the current Chinese AI industry is top-heavy, with many companies dedicated to the development of AI products and applications. Few cater to the foundation level, which demands long-term investment yet hosts industries that have a greater potential value than those at the other levels.

To be fair, the research and application of AI in China did not become a hot topic until 2015, when AI was propelled into the public limelight by a series of newly issued national policies to promote technological innovation. The National Scientific and Technological Innovation Planning of the 13th Five-Year Plan (「十三五」國家科技創新規劃) and the New Generation Artificial Intelligence Development Plan (新一代人工智能發展規劃), issued by the State Council in 2016 and 2017 respectively, provide clear directions for the developing of next-generation AI, taking it to the national strategic level in a systematic way. Simultaneously, local governments began to work on increasing their local industry’s competitive advantage in the AI field. Zhejiang, for example, launched an “AI town” project, which drew AI talent from Alibaba and Zhejiang University to settle in Hangzhou (杭州). In December 2018, the Guangdong-Hong Kong-Macao Greater Bay Area (粵港澳大灣區) issued its first blue paper on the AI industry, and revealed plans to invest 10 billion yuan to promote the development of the Greater Bay Area’s AI capacity. 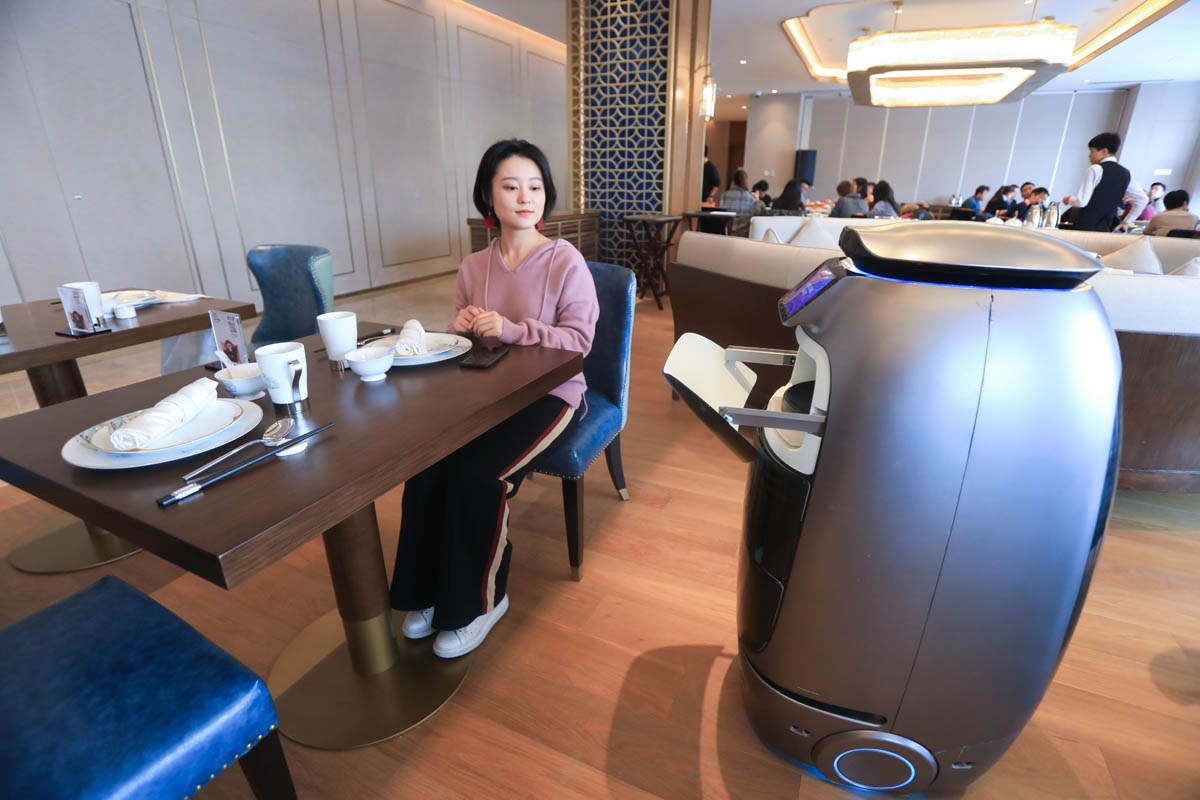 The overall trend of AI development worldwide shows China and the United States are the two frontrunners in the current AI race. Both possess a significant lead over other countries in terms of AI market share, scale of startups, talent pool size and number of research achievements. However the prospects for China’s AI industry are not all rosy when it comes to quality development, as it struggles with problems that its chief competitor does not have:

(1) China has an advantage in AI adoption but is relatively weak in core AI technologies like AI chips and algorithms, as it does not have sufficient top talent in these fields. While the total number of AI researchers in China is second only to that in the United States, only 5.4 percent of them are elite in their fields, which makes China sixth in the global ranking in this regard, behind, for example, the United States, the United Kingdom and Germany. The number of higher education institutions promoting AI education is also telling. In China no more than 30 universities have labs devoted to AI research, which fail to meet the AI industry’s demand for talent. In short, where AI talent is concerned, China lags behind other leading nations in the AI race. To address this, the Ministry of Education issued the AI Innovation Action Plan for Colleges and Universities (高等學校人工智能創新行動計劃) in 2018, which prompted colleges and universities to establish AI-related majors, collaborate with innovative enterprises to set up joint research labs and compile the nation’s first AI textbooks for senior secondary education. 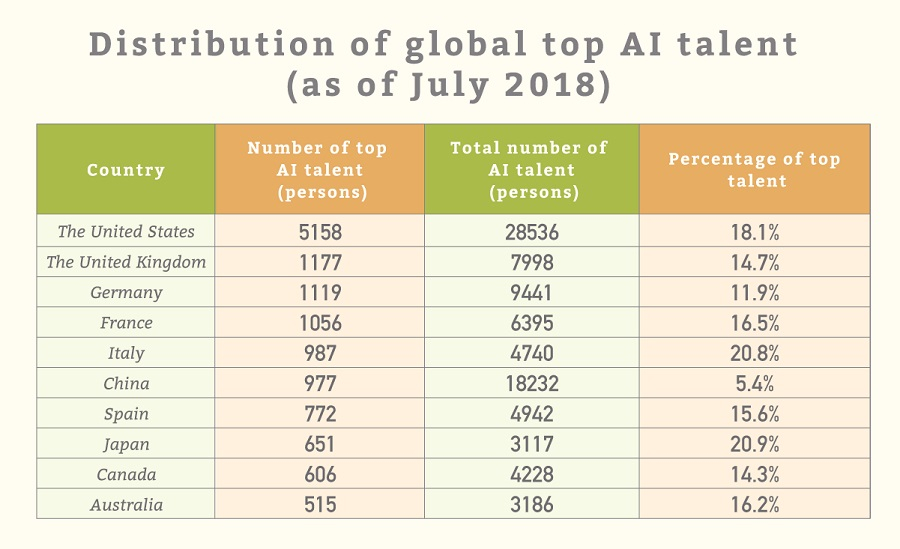 (2) In the realm of AI scientific research, China has a clear advantage in the number of scholarly papers produced and the number of patents filed. However, its output of truly original, groundbreaking landmark research achievements has been lackluster, especially in the field of basic AI research. Currently, China is leading the way in global patent filing, with more AI patents filed than the United States. However, most of the patents concerned are for application-level technologies and not for breakthroughs in fundamental AI theories or key technologies. Thus, China must work towards raising its research quality and resolving the aforementioned key issues in order to catch up in the field of AI research.

Yang Fan (楊帆), vice president of the AI enterprise SenseTime (商湯科技) has stated, “AI will become a massive trend in the next decade, and is set to revolutionize every aspect of life in ways most can’t begin to fathom.”

Against this background, by capitalizing on the market advantages and the development of technologies, the AI industry in China is likely to churn out more new products and applications which will benefit more people.

White Paper on the Development of AI Industry in China (中國人工智能產業白皮書) deloitte.com, November 2018