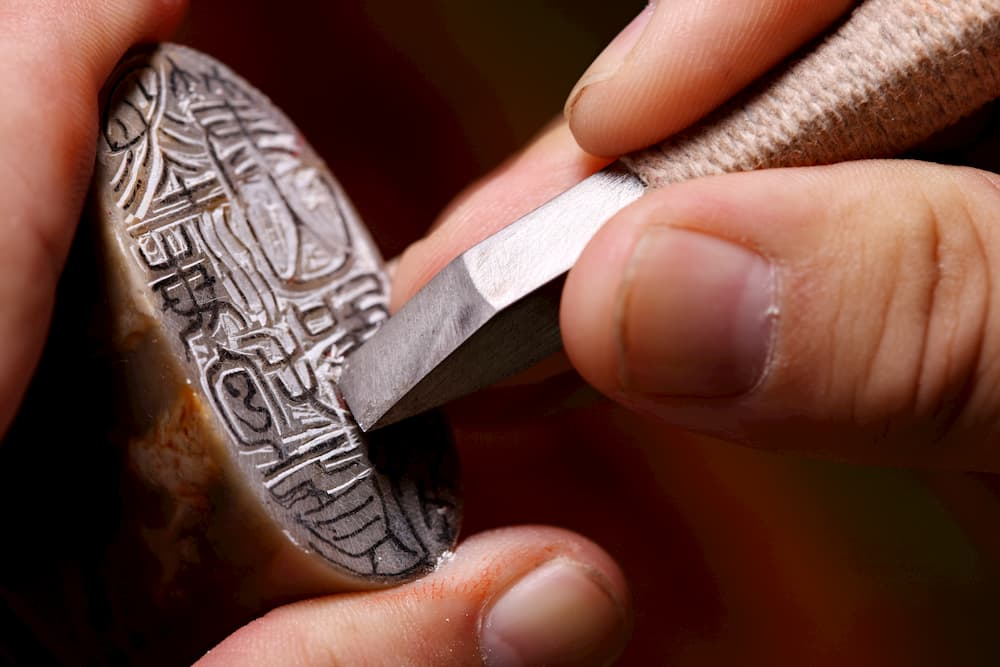 The art of seal engraving developed from ancient seal making, and the names of seal have changed often over time. In the pre-Qin era (times before 221 BCE), it was generally called xi regardless of a person’s social status. Xi, as a token of empowerment, was originally worn as a credential of the wearer’s political identity and administrative authority. After First Emperor of Qin (259–210 BCE) defeated the six rival states, he stipulated that the seal “xi” must be exclusively used by the emperor. The seal used by ordinary people was called “yin.” In the Han dynasty (206 BCE–220 CE), the seals used by the emperors, empresses, princes, and nobles were called “xi”; other names of official and private seals were zhang (signet), yinzhang (chop), and yinxin (seal token).

True seal engraving art began to develop in the Ming dynasty. Within the 500-year span of the Ming (1368–1644) and Qing (1644–1911) dynasties, many different schools and styles of seal engraving emerged. Wen Peng (1498–1573), the leading master of literati-style seal engraving of his time, initiated the study of stone engraving in the Ming and Qing dynasties. Through the efforts of He Zhen (1530–1606), Cheng Sui (1607–1692), Ding Jing (1695–1765), and others, who followed traditional practice but also changed it, various seal engraving schools were formed. Wen Peng and a group of engravers influenced directly by him were classified as the first seal engraving schools in Chinese seal engraving history, known as the “Sanqiao school” (Wen Peng’s style name was Sanqiao) and the “Wumen school” (Wen Peng’s father Wen Zhengming (1470–1559) was a major representative of the Wumen school of painting). After Wen Peng, master seal engravers who formed their own schools that included the Wan school, She school, Zhe school, Deng school, Yishan school, Wu school, and Zhao School in the Ming and Qing dynasties. Based on the founders or representatives of different schools, there were the Xueyu school (He Zhen,1522–1604), Sishui school (Su Xuan, 1553–1626), Putian school (Song Jue, 1576–1632), Lou Dong (Wang Guan, 1575–1631), and others.

The late Qing dynasty was the heyday of epigraphy. The foremost of seal engravers, Wu Changshuo (1844–1927), a prominent painter and calligrapher, organized the Xiling Society of Seal Art. He gathered elite engravers to promote seal art, published books on ancient seals (collection of impressions of seals by famous seal-engravers) and scholarly writings. Discussing seal engraving became prevalent throughout China and became a specialized type of knowledge—epigraphy.

Most of the seal engravers of earlier generations in Hong Kong came from Guangdong province. Those who have earned public acclaim as influential and prestigious engravers are the “Five Elders in Hong Kong.” They were Deng Erya (1884–1954), Luo Shuzhong (1989–1969), Feng Kanghou (1901–1983), Chen Yushan (1904–1987), and Lu Dinggong (1904–1979). The first four were influenced by Huang Shiling (1849–1908), master of the Guangdong school, and his seal engraving style. Taking a neat and bold style, these four engravers also developed into their own distinctive style. Lu Donggong closely followed the engraving style of the Qin and Han dynasties, but looked scornfully at other engraving schools that emerged in the Six Dynasties (222–589) and thereafter. He thus formed his own unique style. In 1978, young engravers established the Yousheng Seal Society and started the publication of Yousheng yinji (Yousheng’s collection of seals) to promote the development of seal engraving in Hong Kong.