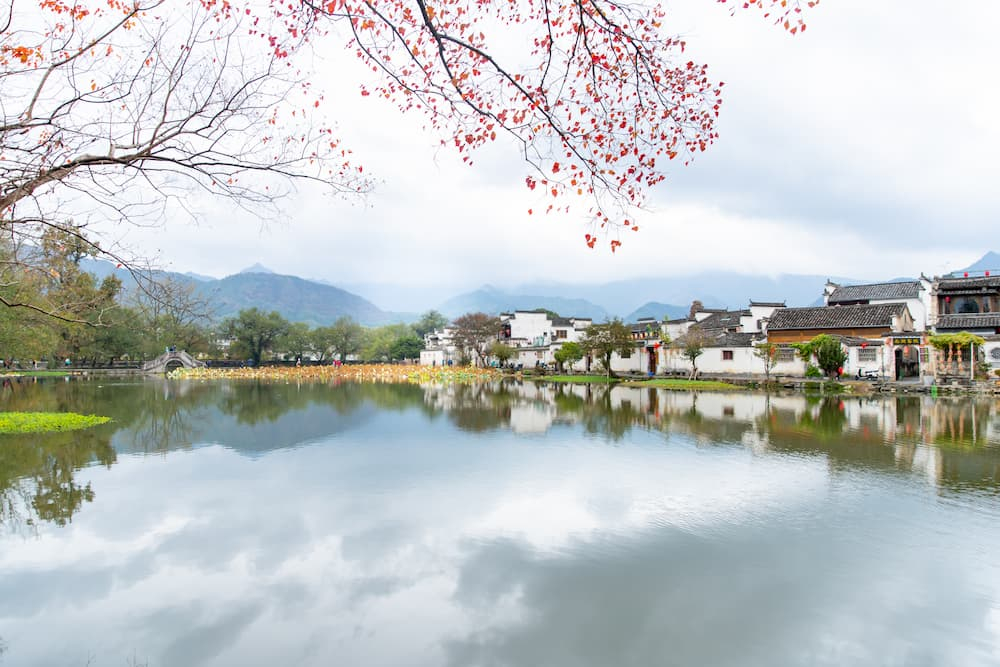 Anhui, abbreviated as Wan (after the historical state of Wan and the Wan river), is a province in eastern China. The southern part of the province is collectively referred to as Wannan (southern Anhui). Its southernmost area was under the jurisdiction of the Huizhou prefecture during imperial times. In this area, there are two well-preserved villages, Xidi and Hongcun, located in Yi county, that were inscribed on the World Heritage List by the United Nations Educational, Scientific and Cultural Organization in 2000.

The two villages were included on the World Heritage List because of their unique residential architecture and because they have preserved the social life, economic activities, and cultural content of the Ming (1368–1644) and Qing dynasties (1644–1911). For their role in preserving authentic historical and cultural information, they have become cultural treasures.

There are hundreds of villages like Xidi and Hongcun in southern Anhui.

Situated on hilly terrain relatively isolated from the outside world, mountainous and picturesque southern Anhui developed later than the fertile Central Plain. Political unrest during the Jin (265–420), late Tang (late ninth century), and Southern Song (1127–1279) dynasties caused three waves of refugees from the Central Plain to migrate south. Recognizing this land as a “peach blossom paradise” far away from social chaos, some central government officials together with their clans moved to Huizhou. Since then, the rich lifestyle and unique history and culture of the many ancient villages in southern Anhui began to take form.

The landscape is beautiful but lacks natural resources; this has made it necessary for the residents to make a living away from home. A local saying goes, “If you did not do good deeds in your previous life, you will be born in Huizhou where teenagers are cast out of their homes at an early age.” Since culture and economy shifted south during the Southern Song dynasty, Huizhou merchants prospered. Most of the ancient dwellings we see today in Huizhou were constructed between the fourteenth and nineteenth centuries—the heyday of both Huizhou merchants and Huizhou culture.

What cultural information can one learn from ancient villages in southern Anhui?

Village planning embodied the spirit of traditional Chinese culture, reflecting the notion of “harmonious coexistence of humankind and nature” as well as the beliefs in feng shui. A village in Huizhou was traditionally inhabited by a clan, and the village layout was formulated under the eye of the clan leader and with the advice of a feng shui master (geomancy expert). The builders would take advantage of mountain slopes and the water flows. For example, Hongcun was designed as an ox-shaped village, with a hill as the head, two old trees as horns, and four bridges as legs. The workmen also chiseled a kilometer-long winding ditch for the ox’s “intestines,” and dug a lake (South Lake) of thousands of square meters for its “belly.” Designers used water systems to improve the environment, and to bring an auspicious aura to the ox-shaped village.

Ruist culture influenced the residential buildings which retained some of the distinctive features of Chinese residential architecture. The white walls and blue tiles announced to visitors that the Huizhou merchants took great pains in operating their businesses “to be perfectly pure and clean” (qing “pure” is a pun on qing “blue,” and bai “clean” also has the meaning of “pure). High “horse head” walls (matou qiang) were built to prevent fires spreading from one’s own property should disasters strike. It was one way of respecting one’s neighbors. Huizhou architecture is simple, elegant, and unique in style, with a compact layout, ingenious structures, refined decor, and exquisite furnishings.

Touring southern Anhui for its architecture, one should look for the conventional houses, ancestral shrines, and ancient memorial archways. These three types of structures are known as the “three icons” of Huizhou’s ancient architecture.

Walking around in the ancient villages, one can enjoy the way the dwellings and landscape seem to blend with one another, and give concrete expression to the ancient concept of “the harmonious coexistence of humankind and nature.” The fine architectural details must also be savored. The carvings of each brick, piece of wood, or stone tell an ancient tale. There are many meticulously composed couplets on the pillars, such as “he who is able to bear hardships has strong resolve; he who is willing to suffer losses is not foolish,” or “to benefit humanity, one should practice benevolence; to bring renown to one’s family one must diligently study.” These words, plain and easy to understand, communicated the ancient builders’ earnest advice for future generations.