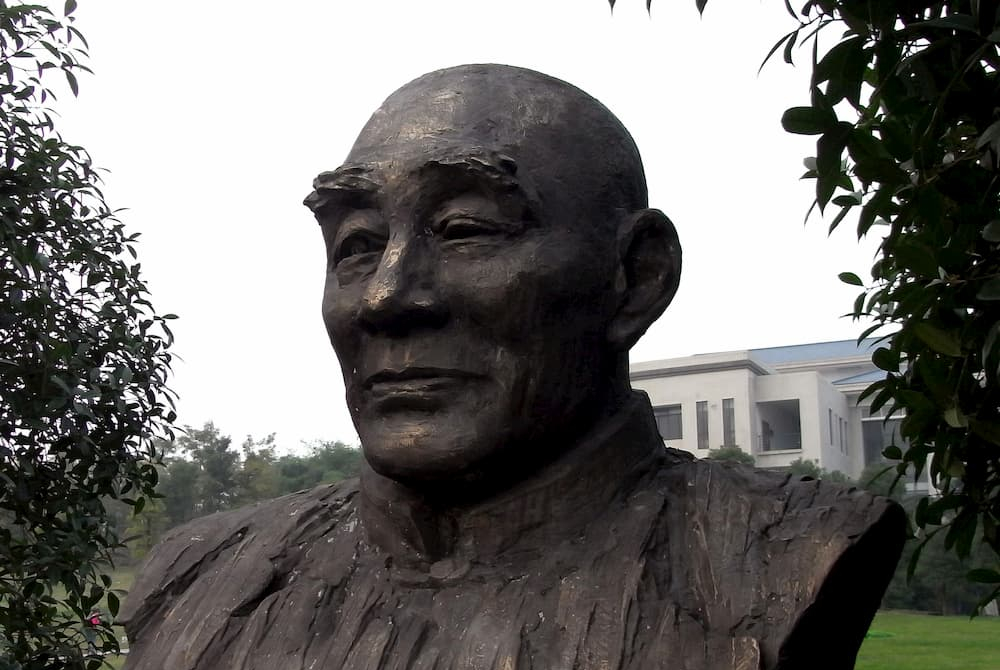 Ye Shengtao (1894–1988), a renowned writer, educator, publisher, and one of the founders of the first Literary Research Society during the May Fourth Movement, dedicated his whole life to publishing and language education.

After graduating from Caoqiao Middle School, Ye Shengtao went to Suzhou to teach at the Yanzimiao Primary School, but was squeezed out of work by the conservative school authorities. In 1915, he was invited to Shanghai Shanggong School to teach higher primary classes. In 1917, before the spring semester began, he went to Luzhi township in Wu county, Suzhou and taught at the Fifth Higher Primary School. After July 1921, he taught at several schools. He was invited to teach at the Chinese Preparatory School in Wusong, Shanghai, the First Normal University in Zhejiang, and the Chinese Department of Peking University. However, he continued to live at Luzhi, and his wife Hu Molin was teaching at the girls’ division of the Fifth Higher Primary School. It was not until the autumn of 1922 that he and his family moved back to Suzhou. He lived at Luzhi for nearly six years. Ye Shengtao once said that his real career in education started at Luzhi, and it was also the cradle of his creative writing.

For most of his working life, Ye Shengtao was an editor. His routine work was reading manuscripts. He served as an editor at a few publishers, from the Commercial Press to the Kaiming Book Company. He later served as the director of the Textbook Compilation Committee in the North China branch of the Ministry of Education, and concurrently served as vice director-general of the Administration of Press and Publication, and deputy director-general of the Compilation Administration after 1949. Ye Shengtao made tremendous contributions to the fields of publishing and education, especially during the five years that he worked at the Press and Publication Administration. During that time, he was involved in the planning and formulation of large-scale plans, including such projects as the Five-Year Plan, character standardization, uniformity of typefaces, copper mold casting, punctuation use, the improvement of printing and binding techniques; and minor issues such as the division of work at various publishers, staffing, paper use, and page layout. He was a part of the pioneering work in the publishing industry of the New China.

Ye Shengtao devoted his whole life to promoting the New Literature Movement. He participated in the Xinchao (New Tides) Association, a student organization at Peking University; his various works include fiction, poetry, essays, literary criticism, and plays. From 1921, he taught in middle schools and universities in Shanghai, Hangzhou, and Beijing. He, Mao Dun (1896–1981), Zheng Zhenduo (1898–1958), and others founded the Literary Research Society, one of the earliest, most influential and contributable literary organizations in the New Literature Movement.

Ye Shengtao published a series of short story collections in the 1920s—Gemo (The barrier), Huozai (The conflagration), Xianxia (Under the line), Chengzhong (In the city), and Wei yan ji (Without satiety), etc. In 1928, he created the novel Ni Huanzhi (Schoolmaster Ni Huanzhi) which enjoyed a long lasting reputation with thirteen editions published before 1949 and several editions afterwards. The work was also translated into different languages, including English, French, Japanese, Russian, and German. In addition, he wrote children’s stories, including Xiao baichuan (Little white boat), Diqiu (The globe), Fang’er de meng (Fang’er’s dream), Xin de biao (A new watch), Wutong zi (Seeds of the Chinese parasol tree), and Da houlong (Big throat). These stories were compiled into a collection called the Daocaoren (Scarecrow). Lu Xun (1881–1936) said in admiration that “Mr. Ye Shaojun [Shengtao] in his Daocaoren created a new path for himself in the field of children’s stories in China.”