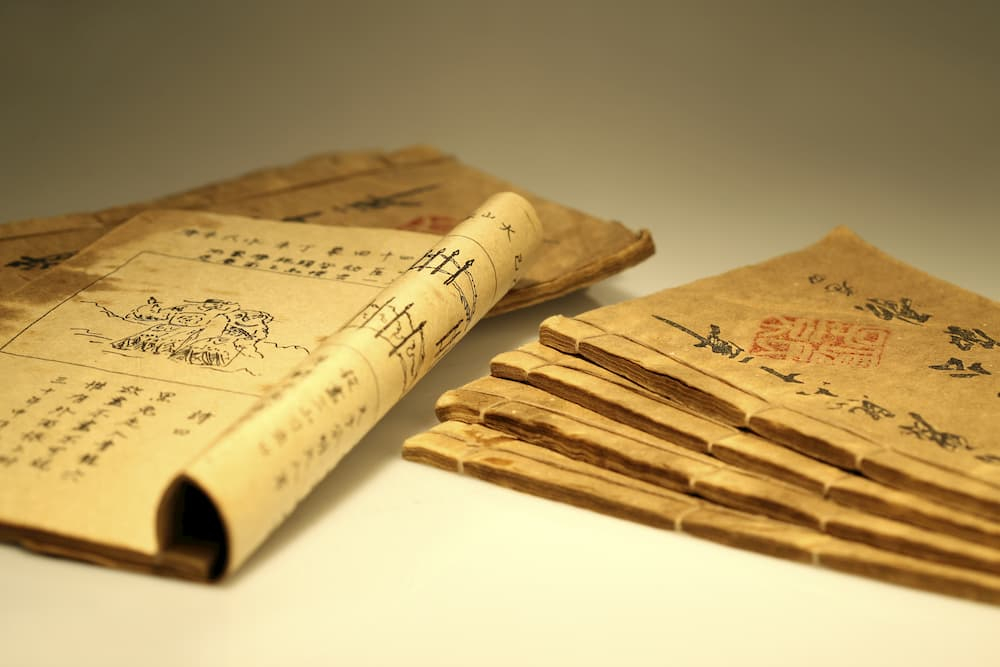 Early in its imperial history, China had already begun compiling catalogs of books. By the late Western Han dynasty (206 BCE–24 CE), there existed a complete catalogue of the imperial library, Bie lu (Separate listings) and Qi lüe (Seven summaries). During the Eastern Han, Ban Gu (32–92) compiled the “Yiwen zhi” (Monograph on bibliography) in the Han shu (History of the Former Han), which records 13,269 juan (fascicles) written by members of 596 authors, divided into thirty-eight categories. It is the earliest extant Chinese bibliography. According to the “Jingji zhi” (Monograph on bibliography) in the Sui shu (History of the Sui), after 400 years of frequent wars in which the realm had been divided and ruled by the state of Wei (220–256), the Jin dynasty (265–420), and the Northern and Southern Dynasties (420–589), more than 30,000 ancient books and records had survived from antiquity into the seventh century. Book making and printing continued to grow throughout the Tang (618–907), Song (960–1279), Yuan (1271–1368), and Ming (1368–1644) dynasties. In the mid -eighteenth century, the Qianlong emperor (r. 1736–1795) of the Qing dynasty collected more than 20,000 books from across the entire realm in order to compile the Siku quanshu (Complete library of the four treasuries). The number of books gathered exceeded the number of all the books produced elsewhere on the globe during the same period. According to the latest survey, during the nearly 300 years of the Qing dynasty—from the mid-seventeenth century to the early twentieth century—more than 50,000 books were produced. At present, the total number of ancient Chinese books and records preserved everywhere in the world totals nearly more than 100,000 books in forty million volumes.

A number of topics fall under the rubric of the history of Chinese books, including: the history of writing and compilation, printing, circulation, and preservation of both ancient and modern books. It involves the studies of classical bibliography, editions, printing history, and publication history. This article provides a brief outline of just four aspects of the history of Chinese book development: the forms and editions of both ancient and modern books.

Three elements are indispensable for producing a book: subject knowledge, the written language, and the carrier. The knowledge originates from the production activities and social practice of our ancestors’ arduous work, which continues to the present day. Chinese books, their outer form, their printing, and their binding have undergone a long evolution. Books produced from the pre-Qin period (times before 221 BCE) to the Wei dynasy were made by writing on slips of bamboo or pieces of silk, either of which could be rolled into scrolls. From the Wei and Jin dynasties until today, paper books have been popular. After paper books emerged, book binding gradually transitioned as the book moved from the scroll to the codex format. There have been several types of binding, including pleated-leaf binding, butterfly binding, wrapped-back binding, and thread binding. Today, many of these books, from different periods and with different binding styles, survive and they are splendid to look at. After block printing was invented and became popular, the idea of an “edition” emerged. The same title could be printed from blocks engraved in different regions, or might be carved by different engravers—these books are identified as “xx edition” or “xx version.” The same book, in different editions may also differ in terms of the content, writing, engraving, printing, paper, and quality.

Modern books refer to those books printed after the introduction of Western printing technology to China. In the late fourteenth century, the Chinese engraving technique was introduced to the West. In 1439, Johannes Gutenberg (ca. 1398–1468) of Germany developed the printing press; in 1453, movable type made of lead alloy was invented. The durability of the lead type and the speed of the press encouraged the production of books and periodicals, and increased learning across a vast swath of people; this had a great influence on the development of Western civilization. In the mid-nineteenth century, Western printing technology was introduced to China. Along with the printing presses, the Chinese also accepted books about Western natural and social sciences; these were fields which were less advanced in China. Modern books differ from traditionally produced books in the following ways: they are the products of machine printing; lead type is made by casting, and the ink and paper are the products of chemical synthesis. The traditional silk thread and paste were replaced by metal staples and glue; wrapped-back binding gave way to paperbacks and hardcovers. Special attention began to be paid to the cover design, especially in the case of hardcover books which have dust jackets. Modern books are divided into two types: paper and non-paper. After the introduction of books printed on paper it became more and more common to issue revised editions or editions printed from newly carved blocks or set type; these appeared to meet the demands of the market and helped to preserve the books. In general, the frequency of reprinting is higher and the cycle of circulation is shorter for any important or best-selling books. Non-paper books such as film, microfiche, and CDs are reissued based on availability of new material, equipment, or information updates. Therefore, both paper books and non-paper books have edition issues.