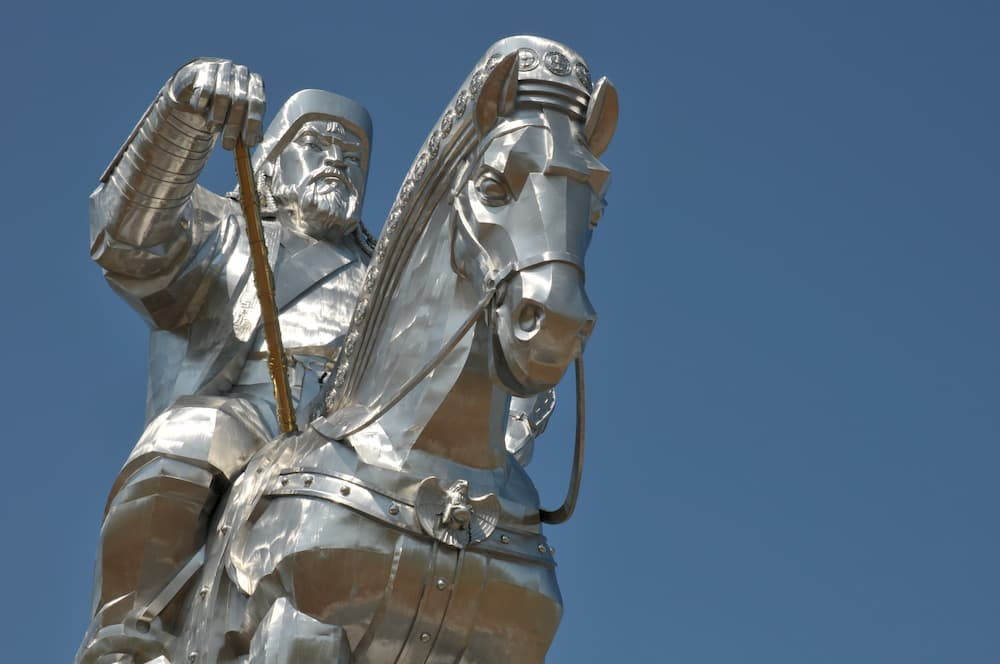 Chinggis Khaan (1162–1227), born Temüjin, was the founder of the Mongol Empire (1206–1259). He lived in an era of political chaos and incessant clashes between independent regimes. The Mongolian Plateau rival tribes battled constantly; in the south, the Jin (Jurchen, 1115–1234) and the Southern Song (1127–1279) were locked in confrontation. Against this tumultuous backdrop, Temüjin, with his remarkable political and military acumen, unified the Mongolian Plateau and established a Mongol empire stretching across Europe and Asia.

Temüjin was born to a noble family. Early in his life, his father was poisoned by an enemy. As a teenager, he wandered about with his mother, always on the run to escape assassination. This hardship nurtured in Temüjin a stalwart character and indomitable fighting spirit. In 1180, the Merkid, an old enemy, stole his bride. In revenge, the then 18-year-old Temüjin joined forces with To’oril (also known as Ong Khan) and Jamukha; together they defeated the Merkid. This was Temüjin’s first battle. Not only did he regain his wife, but he also earned a reputation for prowess. The scattered tribesmen and warriors rallied around him. In 1189, Temüjin was elected Khan of the Giyan tribe. After that, he won the “Thirteen Tribes War” initiated by Jamugha, the battles against the Tatars, the Giyans, and the Tayichi’ud; battle by battle he eradicated his family’s adversaries. This not only enhanced his prestige, but also laid the foundation for unifying tribes on the Mongolian steppes. In 1203, Temüjin successfully wiped out the Kereyid Clan, and in the following year conquered the Naimans, thereby completing the task of unifying the Mongolian tribes.

In 1206, Temüjin held a tribal council in the upper Onon River, and officially established the Mongol state. He was henceforth known as “Chinggis Khaan.” In order to rule effectively, he set up a comprehensive system of governance which strengthened his rule over the Mongols. It included a more complete implementation of the mingghan system (ninety-five military units of a thousand men each) by which all of the Mongol tribal groups were allocated among his clansmen and meritorious officials. In addition, he expanded his security forces to strengthen the power of the khan, established a judicial system that included promulgation of the khan’s legal pronouncements known as the “great jasagh,” and created a Mongolian writing system. Thus, the Mongolian tribes became more stable and unified, spurring unprecedented growth in economy, culture, etc.

While stabilizing the area under his rule, Chinggis Khaan continued with his outward expansion. In the twelfth and thirteenth centuries, northern China was under the rule of the Jin dynasty. The dynasty had been established by the Jurchens who had oppressed and persecuted the Mongols for quite some time and earned much resentment. In 1211, Chinggis Khaan declared war on the Jin dynasty and finally captured its capital Zhongdu (modern Beijing) in 1215, bringing to an end the subordination of Mongols. In the midst of his fighting in the east, Chinggis Khaan did not neglect to teach a lesson to his enemies in the west. In 1219, he personally commanded 200,000 troops to avenge the plunder and murder of Mongolian caravans by the Khwârazm state, an Islamic state in Central Asia. He overthrew the Western Liao (or Qara-Khitai Khanate, 1124–1218) en route to assail the Khwârazm state. For those cities resisting the Mongolian army, all the residents were slaughtered after they fell. Within a few years, the Mongols annihilated the Khwârazm state, and destroyed many cities in Central Asia. His armies reached the Indus River to the south and the southwestern coast of the Caspian Sea to the west. In 1226, Chinggis Khaan launched a large-scale war against the Western Xia (1038–1227) and conquered it in the following year. However, it was the last battle in the life of Chinggis Khaan. In July 1227, Chinggis Khaan died at Liupan Mountain in Qingshui county. His remains were transported to the north of the Gobi Desert for burial.

Chinggis Khaan’s achievements formed a solid foundation for the founding of the Yuan dynasty in China and for the future expansion of the Mongol Empire. He unified the Mongolian tribes, created a stable society, and greatly expedited the formation and development of a united Mongolian community. He vanquished the Jin dynasty and the Western Xia, and laid the cornerstone for a great unification by the Yuan dynasty (1271–1368). His westward expeditions to Eurasia opened channels for cultural exchange between the East and the West. He was an emissary of cultural dissemination. At the same time, he also launched large-scale predatory wars, engaged in wanton killing and looting, and committed genocide. Most historians agree that Chinggis Khaan is a complex figure with both merit and demerit to his career.