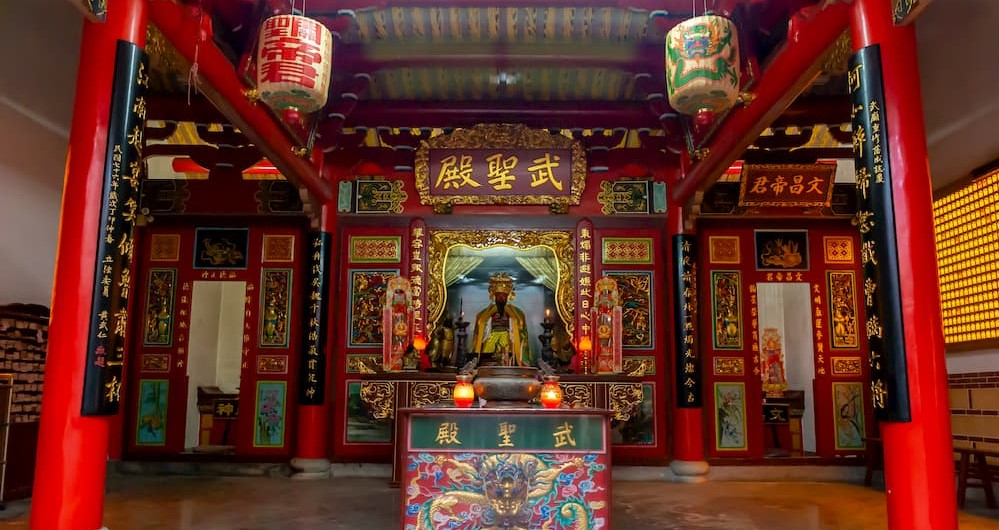 Guan Yu (d. 220), also known as Guan Gong (Lord Guan), an eminent general of the third century during the Three States period (220–280), has been continuously worshipped as a god in China. Modern Chinese people, both at home and abroad, still honor him as Old Master Guan, Imperial Lord Guan, The Martial Sage, Emperor Guan, Sage Guan, Lord Benefactor, and other titles.

The official history Sanguo zhi (Memoirs of Three States) only devotes nine hundred plus words to Guan Yu’s superior martial skills and mighty valor, noting that he was a peerless combat general capable of fighting thousands of enemy troops single-handedly. Regardless of his bravery and righteousness, Guan was criticized as “unyielding and conceited,” which led to his ultimate downfall. This record shows that he is not a particularly outstanding figure in history. However, thousands of years later, Guan Yu is deified as a protector of the entire Chinese nation, overshadowing other heroes of his time such as Liu Bei (161–223), Cao Cao (155–220), and Sun Quan (182–252). Confucius (551–479 BCE), deified as a “sage of culture” and as an “exemplary teacher of all ages,” is the only historical figure considered the equal of Guan Yu.

There is no information about Guan Yu’s family background in historical sources. They only mention “he took refuge in Zhuo commandery.” This may mean that he had to leave his hometown to escape a murder charge. In Zhuo commandery, he met Liu Bei, who later became the founding emperor of the state of Shu Han (221–263). Guan served as Liu’s general, together with another warrior Zhang Fei (d. 221). In subsequent arduous years of warfare, the two generals loyally followed Liu Bei who returned their trust. Guan Yu was once captured by Cao Cao, founder of the rival state of Wei (220–265), who made Guan a deputy general in recognition of his talents. However, Guan never forgot Liu Bei and returned to his former lord after repaying his debt to Cao Cao. Guan enjoyed many military successes, but was ultimately killed by men sent by the warlord Sun Quan, the founding emperor of the state of Wu.

Sanguo yanyi (Romance of the Three States), a historical novel written by Luo Guanzhong in the fourteenth century during the late Yuan and early Ming periods, portrays fictional episodes from the life of Guan Yu, such as “Taking an Oath in the Peach Garden,” “Riding Alone for Thousands of Miles,” and “Guan Yu Releases Cao Cao,” which portray him as a loyal, gallant, and righteous general. To highlight his glorious image, some episodes in the novel are inconsistent with historical records from the time. The fictionalized events might not have been created by the author himself but may have been based on orally circulated Guan Yu stories. Though not completely reality based, these stories became a major component of Guan’s legend that spread widely through opera, novel, painting, and other popular venues.

Because Guan Yu enjoyed such popular acclaim, Buddhists and Daoists appropriated his great reputation when their religions were first disseminated in China. Both the Tiantai and Chan sects of Chinese Buddhism laid claim to Guan’s conversion to Buddhism, while the Quanzhen school of Daoism looked up to Guan as one of the Four Daoist Marshals (or Four Celestial Generals). Seals of Guan Yu first emerged in the Song dynasty, which were said to have been passed down from the Han dynasty but were actually cast by later Daoist disciples in accordance with Guan’s official posts as documented in Sanguo zhi.

From the Tang dynasty (618–907), many emperors conferred posthumous honors on Guan Yu and dedicated temples to him in order to inspire military commanders. During the Wanli reign (1572–1620) of the Ming dynasty, the ruler elevated Guan Yu’s status and gave him the title “Xietian Huguo Zhongyi Dadi” (Great Loyal and Righteous Emperor Who Assists Heaven to Protect the Country). That was the beginning of Guan Yu’s legacy as an emperor of China. Regarded as a supreme deity, Guan increasingly enjoyed fervent worship and was believed to be a protector of literati, soldiers, merchants, farmers, and commoners alike. Successive dynasties kept enhancing his status as “Protector of Country and People,” and more temples dedicated to him were built. Today, he is also enshrined in overseas temples as Guandi, or Emperor Guan.

In China, most deities revered by common folk serve a single function, such as the Dragon King who is charged with bringing rain or Matsu (Heavenly Queen) who protects navigation. At the end of the Ming dynasty, Guan Gong was commonly regarded as a deity to whom the imperial court seeking a male heir to the throne. Buddhist, Daoist, Confucian, and folk devotees constantly enriched his reputation and added to his attributes in different regions and at different times throughout China. As a symbol of loyalty and dutifulness who epitomizes the supreme Chinese moral ideal, Guan Gong has enjoyed unflagging devotion.