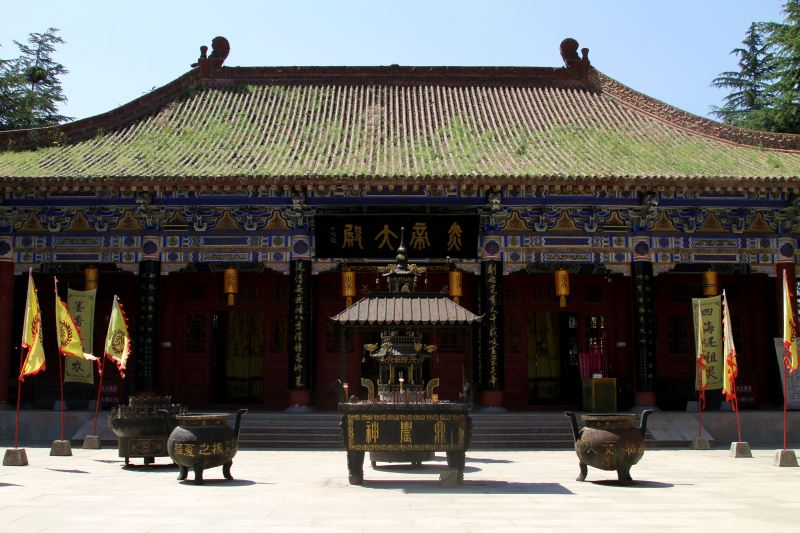 Yan-Huang is a conventional abbreviation for Emperor Yan, also known as the Flame Emperor, and Emperor Huang, commonly known as the Yellow Emperor. They were two tribal leaders in ancient China and are revered as the founding ancestors of the Chinese people. Sacrificial ceremonies for them have a long history and continue even today. The ceremonies are considered the noblest, grandest, and holiest of any Chinese ceremonial activities.

The Yellow Emperor not only unified the Hua-Xia tribe under his leadership, he also united other tribes living along the Yellow River.  He is remembered for his numerous outstanding contributions to social politics, the people’s welfare, and spiritual culture.

The Yellow Emperor’s mausoleum is situated atop Mt. Qiaoshan in Huangling county, Yan’an, Shaanxi province. Following the order from the near to the distant, the mausoleum site consists of three main parts: the front area of the Xuanyuan temple (Xuanyuan is the Emperor’s given name), the temple, and the mausoleum itself. In 1962, the Mausoleum of the Yellow Emperor was the first of the ancient tombs included in the first group of major historical and cultural sites protected at the national level by the State Council.

The sacrificial ceremonies for the Yellow Emperor are traditionally held annually during the Pure Brightness (Qingming) and the Double Ninth (Chongyang) festivals. The sacrifices are inherited from previous generations and performed in an orderly and solemn way. They are pious and respectful and the ritual norms are systematically observed in their entirety. In 2006, the Yellow Emperor Mausoleum Sacrificial Ceremony was included on China’s first list of national intangible cultural heritage.

Tradition holds that Xinzheng (in modern Henan province) is the birthplace of the Yellow Emperor. Renovation and expansion projects which started in the 1990s have resulted in a city that now covers more than seventy-thousand square meters and is divided into five areas: a public square, an ancestral temple area, a ding (tripod) altar area, an art-garden, and the Xuanyuan mound area. According to long-standing tradition, sacrifices are held locally on the third day of the third (lunar) month. In 2006, the sacrifice was named the Grand Ceremony of Ancestor Worship in the Hometown of the Yellow Emperor. Two years later, the State Council confirmed that the ceremony was in the first group of the National Intangible Cultural Heritage Expansion Project.

Emperor Yan, also known as Shennong (Divine Husbandman), is considered the founder of Chinese civilization. He made tremendous contributions to elevating the standard of people’s lives and promoting social progress in a primitive society. For this and his other great historical achievements and merits, he has been revered by generations of Chinese.

Emperor Yan’s mausoleum is hallowed ground where Chinese come to search for their roots and worship their ancestors.  Emperor Yan’s footprints can be found throughout the entire Yellow River basin and the Yangtze River basin, as well. From north to south there are many historical relics related to him. In China, there are four publicly recognized mausoleums for Emperor Yan—one each in Hunan, Shaanxi, Shanxi, and Henan.

Following Emperor Yan’s death, people made sacrifices to him in a number of different ways. Historical records show that in the Baoji area, people were already sacrificing to Emperor Yan during the reign of the Yellow Emperor. Today, large sacrificial activities are carried out in the four provinces already mentioned and in Taiwan. At the discretion of the organizers and sponsors, these sacrifices can take various forms including official, private, and spiritual; they may also vary according to place, with some taking place at the temple while others are held at the mausoleum. Sacrifices can also vary according to the content and manner in which they are carried out; examples would be literary, material object, musical, dragon, drum, dance, or medicine sacrifices.