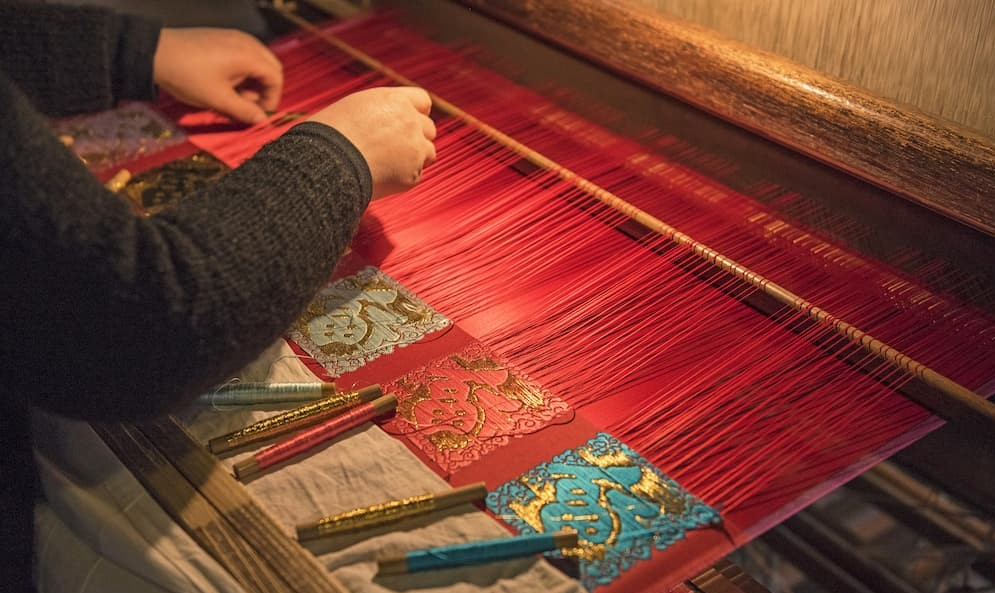 The history of Chinese sericulture and silk production is at least 5,000 years old. Sericulture’s origins can be traced to the Neolithic period from which some silk textiles unearthed in Henan and Zhejiang provinces can be dated. Since that time, the techniques used by silk farmers have continued virtually unchanged: mulberry trees are planted and their leaves are fed to the silkworms until the time they spin their cocoons; farmers would reel the silk from the cocoons and, using hand operated looms, would weave beautiful silk textiles.

The Chinese silk industry reached its peak during the Tang dynasty (618–907). Traditional silk technology reached its maturity during the Ming dynasty (1368–1644). After the mid-nineteenth century, Chinese weavers began to use Western machines to produce silk textiles. By the 1920s, Chinese silk production had largely adopted modern production technology. China is commonly recognized the largest producer of silk. Currently, China produces more than seventy percent of all silk fiber, and more than fifty percent of all silk textiles in the world.

The Chinese sericulture industry is widely distributed across all regions in China except for Qinghai and Tibet. Key production regions are Zhejiang, Jiangsu, Sichuan, and Shandong provinces.

Mulberry silkworms (Bombyx mori), also known as domesticated silkworms, if left on their own would normally undergo a complete metamorphosis from egg to larva, pupa and then moth. When a silkworm reaches the pupa stage, it spins itself a cocoon of silk around itself for protection. Cocoons are the raw material of the silk industry.

Silk fiber is mainly composed of two strands of fibroin, the cross-section of which is shaped like an obtuse triangle. These are bound together by sericin, a glue-like protein, that has wrapped itself around them. It is a natural protein filament with numerous advantages: it is tough, slender, smooth, soft, shiny, and acid-resistant. Silk is beneficial to human health: it is soft to the touch, has a lustrous elegance, absorbs moisture, and has good air permeability. Most silk textiles are used for underwear and fashionable outerwear.

Sericulture and silk permeate Chinese life. The beauty of silk enriches daily life. People outside of China who were used to clothing made from linen, cotton, and wool admired such beautiful and soft silk as twill damask, gauze, tabby silk, and satin. These and other silk textiles were greatly desired outside of China and gave rise to a great commercial enterprise. The “Silk Road” was the name given to the route taken by silk merchants as they journeyed between China and the West. Silk textiles were not only used to make clothes; they were also used to make other necessities of daily life. By weaving, embroidering, and dyeing, silk was transformed into a wide variety of things from drapes and streamers to quilt-covers and mounting material for books and paintings. Small silk items such as handkerchiefs, fan covers, purses, and bibs can be seen almost everywhere.

From a political-economic aspect—China’s rural economy depends primarily upon the sericulture industry. It is one of China’s most important foreign trade revenue sources.

The relationship between silk and Chinese culture is reflected in its language, etiquette, and customs. A large number of early Chinese characters bore some relation to silk. The “silk” radical [纟] is mostly found in those characters related to silk weaving; many of them are still used today. Silk is also closely related to the Chinese ritual system. The natural division of labor in ancient China was that men farmed and women wove; emperors personally tilled the land, and empresses raised silkworms in order to set an example for the people. The encouragement of both sericulture and agriculture was a major criterion for assessing an official’s political achievements. Special customs and rituals related to sericulture emerged. For example, sacrificial offerings were made to silkworm deities; during the breeding of silkworms, all other activities were suspended; there were also various celebratory activities as well as taboos that were observed.