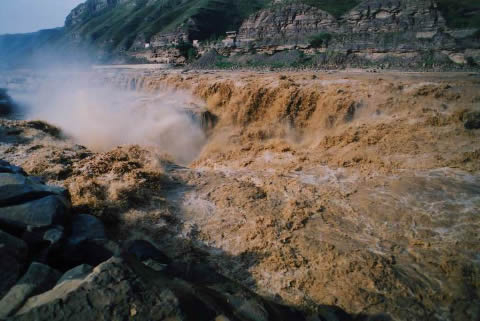 China’s ancient civilization was founded on agriculture. Water conservancy has thus always been a matter of concern. According to legend and later records, Yu the Great the purported founder of the Xia dynasty (ca. 2100–ca. 1600 BCE) succeeded in “controlling the waters” of the Great Flood which had begun and continued during the reigns of his predecessors, Yao and Shun. Yu’s achievements and historicity remain as yet unconfirmed although there is archaeological evidence of catastrophic flooding of the Yellow River around 1920 BCE. But the well-documented and still-existent Dujiangyan irrigation system in Sichuan province in Southwest China continues to play a role in water conservancy in China since its construction more than two thousand years ago. It demonstrates the high level of skill attained by Chinese hydraulic engineers at that still-early time.

In distant antiquity people had no choice but to flee from rising waters. Over time, however, they developed methods of flood control. In China during the Warring States period (475–221 BCE), at the same time the lower reaches of the Yellow River, a region that would become prone to flooding were becoming more widely cultivated for agriculture, iron tools came to replace bronze ones, and these were not only more useful in farming but also in systematically constructing embankments on the river. However due to factors such as heavy rains or rising river beds caused by silt these dikes inevitably burst with dire consequences; the Yellow River sometimes changed its course. In response, some advocated that more channels (tributaries) be dredged to divert the current and lessen the danger. But this did not completely prevent the occurrence of floods. By the middle of the Ming dynasty (ca. early sixteenth century), some proposed a different approach called “storing water with embankments” and “injecting water into sand.” This entailed a wider channel for the river and a more complex system of twin dikes, a system which endured for some centuries and was reasonably successful until late in the Qing dynasty (1644–1911) when there recurred extremely disastrous flooding. To an extent this could be blamed on system neglect brought about by disorder and unrest in China at that time.

In Chinese lore and written records there is, as noted above, mention of attempts at flood control by the legendary or quasi-legendary Yao, Shun, and Yu. According to these accounts more than 4,000 years ago torrential rains hit China. The deluge lasted for years and caused widespread flooding, so people had to escape to higher ground to live. Yao appointed Gun to deal with the issue. He built dike after dike but these all eventually broke. Ultimately Shun banished him. In the meantime Gun’s son Yu, at the recommendation of the tribal alliance meeting, assumed his father’s position. But learning from his father’s failure in flood control, Yu employed a dredging method of diverting water with waterways instead of a blocking scheme to contain it with dikes. He allied with many tribes such as the Gonggong, Boyi, Houji, and others, and they worked together on the project. After more than ten years, the flooding ceased and the waters were controlled. Immediately afterwards, he introduced to people the idea of digging ditches for irrigation purposes, whereby agriculture was developed. Yu is regarded in Chinese history as someone who turned water from something disastrous into something beneficial and thus laid an important foundation for the development of the Chinese nation.

The development of water conservancy in China is reflected in various major flood control projects through history. The most famous is the Dujiangyan irrigation system in Sichuan, one of, if not the earliest examples of water conservancy used in flood control. This project aimed at the Min River involved both the construction of a water-diverting levee of bamboo baskets and a channel through a local mountain to send excess water also to the agricultural plain. It was initiated around 256 BCE in the late Warring States period by Li Bing (fl. ca. third century BCE), the then Qin state governor of the Shu commandery, and his son. Still in use today (with some modification), this large-scale water conservancy system of ancient China not only prevents flooding, but also facilitates farming and allows the waterway to remain open for shipping and travel as its ingenious design avoided the building of a dam. China has a long history of using natural waterways for shipping and travel. A canoe was unearthed from a relic site of the Yuanmou Man (ca. 1,700,000 BP) in Yunnan province. This canoe is made of a tree trunk with the middle part hollowed out and this early period is referred to as one of “hollowing timber to make a boat and trimming wood to make oars.” Millennia later with the appearance of modern humans and the development of society, including the trading of commodities, artificial canals made their debut. This occurred after the Western Zhou dynasty (ca. 1100–771 BCE) during Spring and Autumn period (770–476 BCE), with first man-made canals appearing in the lower reaches of the Yangtze, Huai, and Yellow rivers. The first artificial cross-river canal in China noted in written records is known as the “Han Conduit” (Hangou) which provided access between the Yangtze and Huai rivers. Ordered dug by the state of Wu in 486 BCE and completed in three years, it remains in use to this day. The world’s longest man-made canal is the Jing-Hang Grand Canal, which today connects Beijing and Hangzhou and was first built in the Yuan dynasty (1271–1368). Its origins can be traced back to the earliest canals of the Spring and Autumn period and particularly the large project of the Sui dynasty (581–618). This canal provides access among the rivers known in the present time as the five main waterways, namely the Hai (Haihe), Yellow, Huai, Yangtze, and Qiantang. Measuring nearly eighteen hundred kilometers, the Grand Canal was the main waterway transportation route in the Ming (1368–1644) and Qing dynasties.

In China’s long history of achievements in science and technology the high level of its hydraulic engineering is noteworthy. This is the result of the Chinese people’s thousands of years of effort and experience in water conservancy. A host of experts in this field dating from ancient to more recent times made this possible. This includes Guan Zhong (ca. 720–645 BCE) of the late Spring and Autumn period, Jia Rang (fl. 6 BCE) of the Western Han, Jia Tan (1038–1103) of the Song, Guo Shoujng (1231–1316) of the Yuan, Xu Guangqi (1562–1633) and Pan Jixun (1521–1595) of the Ming, Jin Fu (1633–1692) and Chen Huang (1637–1668) of the Qing, and others among them especially Lin Zexu (1785–1850). Lin is now of course renowned as a national hero of the Opium Wars of the late Qing dynasty, but he was also in his career an outstanding flood control official. While he was posted in the Far West in Turpan in today’s Xinjiang Uyghur Autonomous Region, Lin proactively promoted the cultivation of Karez (term derived from Uyghur language), pit wells that gather underground water for irrigation. The project made the best use of local natural and geographical conditions and turned numerous waste lands into fertile soils. Karez wells have since continued in use in the region and are known locally as “wells of Mr. Lin” to commemorate his contribution.