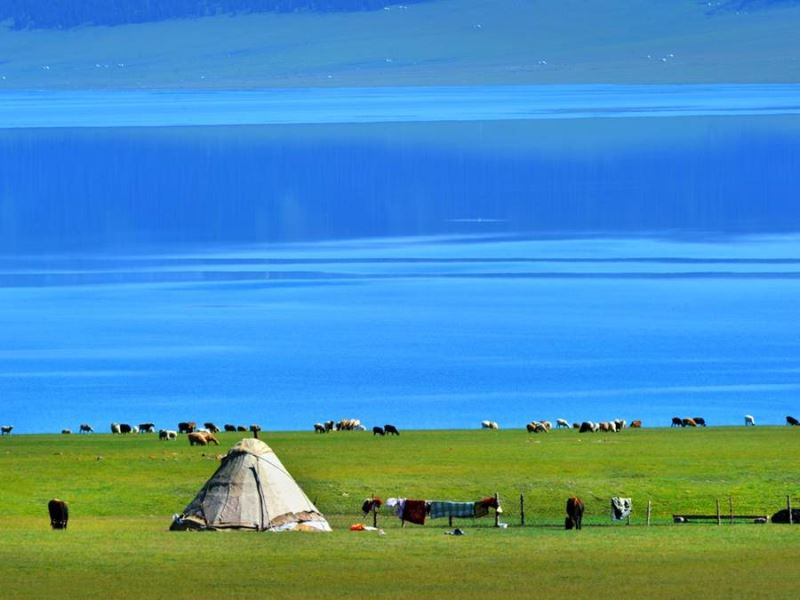 The Xinjiang Uyghur Autonomous Region (Xinjiang, for short) is a national autonomous region in the northwestern part of the People’s Republic of China; its capital is at Urumqi. In 1955, the autonomous region replaced the former Xinjiang province. It is the largest provincial administration by land area in China.  Covering more than 1.6 million square kilometers, it comprises about one-sixth of China’s land area.

Since antiquity, the Xinjiang area has been home to many different groups of people. By the late nineteenth century, Uyghurs, Han Chinese, Kazakhs, Muslims, Mongolians, Kyrgyz, Sibes, Tajiks, Uzbeks, Manchus, Daurs, Tatars, and Russians were all living in the province. Statistics from 2015 show that the ethnic population of Xinjiang makes up more than sixty-percent of the region’s population; this translates to about thirteen million people. Multilingualism is a fact of life here, with three out of the six major language families in the world represented. The government of the Xinjiang autonomous region protects the rights of ethnic groups to use their own languages. Seven languages are taught in elementary and middle school: Uyghur, Mandarin, Kazakh, Kyrgyz, Mongolian, Sibe, and Russian. Institutions of adult education offer instruction in four languages: Mandarin, Uyghur, Kazakh, and Mongolian.

Influenced by various religious cultures over the course of time, the many ethnic groups in Xinjiang gradually adopted their own unique customs. From clothing, food, marriage customs, and taboos to religious beliefs, each group demonstrates their own distinctive history and culture. For example, the Kazakhs are a nomadic people who are known for their exquisite horsemanship. They often test these skills against one another in their traditional recreations. These may include horse racing, buzkashi, a sport involving scoring goals by “capturing” and carrying a headless goat; kyz kuu, “girl chasing,” a type of pre-marriage sport in which women on horseback chase after young men who, if they are too slow, may be playfully whipped. The Kyrgyz have been well-known for their falconry for thousands of years. There are many traditional foods; some popular snacks are grilled mutton kebabs, rice pilaf (a mixture of mutton, carrots, and raisins) that is eaten with the hands; rangpizi, cold starch noodles seasoned with a piquant sauce accompanied by vinegar and soy sauce; toasted nang bread, whole roasted lamb, and various dairy products. All of these foods are well worth a try, should you find yourself in Xinjiang.

For thousands of years, the distinctive dances, music, clothing, crafts, agriculture and sericulture skills of Xinjiang’s various ethnic groups have had a profound influence on Chinese culture in the Central Plain.

The Mongolian long song (Urtiin duu) is a relic of an oral culture and has been called “the living fossil” of grassland music. Important historical and cultural values have been passed down through the songs that are popular mainly in Bayingolin Mongol Autonomous Prefecture, Bortala Mongolia Autonomous Prefecture, and the pastoral area of the Altai district. In 2005, the Mongolian long song was inscribed on UNESCO’s list of Masterpieces of the Oral and Intangible Heritage of Humanity.

Muqam, a large-scale type of music integrating song, dance, and instrumental accompaniment, is unique to the Uyghurs. This type of music has been performed for centuries and distinctive styles exist in Shache, Kuche (Kuqa), and Hami.

The Epic of Manas is a traditional poem of the Kyrgyz. It celebrates the hero and leader Manas who is the embodiment of strength, courage, and wisdom. The epic passionately sings the praises of him and seven generations of his descendants who courageously led the Kyrgyz against invaders and various evil forces. Manas represents the indomitable national spirit of freedom and happiness.

There are many other arts and skills, some of which are the folk art of the Dolan people, Qiuci (Kucha) music and dance; the unique techniques used by the Uyghurs to mold their pottery, the skill of making paper from mulberry bark, Kazakh embroidery, and Uzbek music. All of these represent very important cultural heritages that are worth cherishing and protecting.