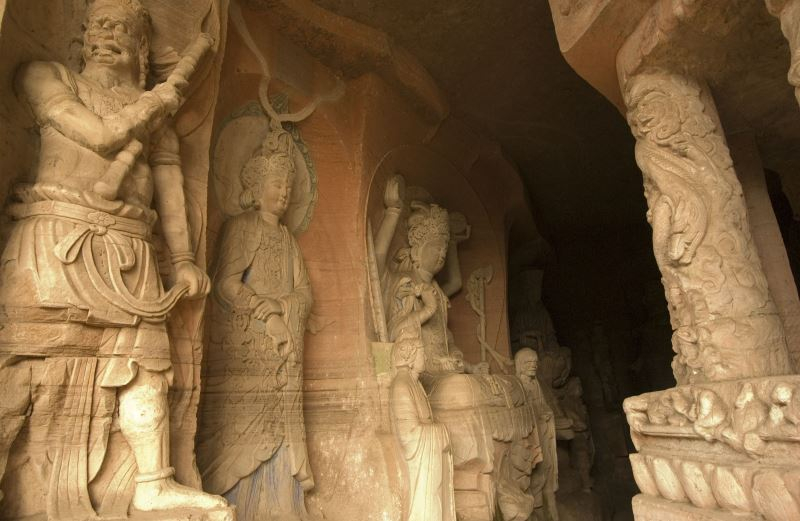 The Dazu Rock Carvings are found on the cliffs of western Chongqing. Carving first began during the early Tang (618–907) period and continued through the rest of the dynasty, the Former Shu (907–925) and the Later Shu (933–966), up until their heyday in the Northern song (960–1127) and the Southern Song (1127–1279). At the present time, the Dazu Rock Carvings are designated as protected cultural relics. Some examples of these are seventy-five stone caves, more than fifty-thousand statues, and more than ten thousand inscribed characters on stelae. The statues in the North, Baoding, South, Shizhuan, and Stone Portal mountains are all exquisitely carved and magnificent. They are a treasure of Chinese sculptural art. In 1999, the Dazu Rock Carvings were included on UNESCO’s World Heritage List.

The caves at the Baoding mountain were built under the leadership of the eminent Buddhist monk Zhao Zhifeng during the Southern Song dynasty. The caves are large, with rich content and vivid images. Important and representative works from these caves include the statues of the “Three Sages of the Huayan School” standing in magnificent poses, the resplendent “Thousand Hand Guanyin,” the giant reclining “Nirvana of Sakyamuni,” and the skilled craftsmanship of the “Cave of Perfect Illumination.” There are also clusters of gigantic sculptures such as the “Illustrated Sutra of Parental Benevolence,” the “Illustrated Sutra of Skillful Means on the Buddha’s Repayment of Kindness,” the “Illustrated Amitāyur-buddhânusmṛti sutra,” and the “Illustrated Depiction of Hell.” Through their vivid images and popular pictures, they instruct the viewers on Buddhist doctrine. Other works give one a sense of a strong rural flavor, such as the “Picture of a Herd,” “The Hennery Maiden,” and the “Maiden Playing Flute.”

The caves of the Northern mountain were constructed over 250 odd years between the late Tang and the Southern Song. There are more than 450 shrine caves, which are as dense as a honeycomb. The majority of the stone carvings are images of various manifestations of Guanyin. For this reason, these caves are referred to as a “museum of Guanyin statues.” The inscriptions on the face of the mountain include “Stele Inscription of Wei Junjing” from the Tang, the “Spirit Road Stele Inscription of Zhao Yijian,” a treasured work of Song calligraphy, and the “Stele of the Classic of Filial Piety in Ancient Script,” the only copy preserved on mainland China. They are all extremely valuable relics.

The Southern mountain caves were built during the Shaoxing reign-period of the Southern Song and contain an extremely important collection of Daoist statues. Of these caves, the most famous is the Cave of the Three Clarities. Beautifully carved sculptures which also serve as valuable historic material for the study of religious Daoism are preserved inside this cave.

The caves located in the Shimen mountain were built between the first year of the Shaosheng reign-period (1094) and the Shaoxing reign-period (1131–62). There are twelve shrine caves with both Daoist and Buddhist statues. Unique Daoist images are those in the Jade Emperor Shrine (Cave no. 2), the statue of the One-Legged Wutong god (no. 7), the Cave of the Three Augusts (no. 10), and the “Illustrated Repenting Writ of the Thearch of the East Marchmount” (no. 11).

Yan Xun, between the fifth year of the Yuenfeng reign-period (1082) to the third year of the Shaoxing reign-period (1133) in the Northern Song, constructed the caves at the Shizhuan mountain. This is a typical example of statues reflecting the synthesis of Buddhism, Daoism, and Ruism (Confucianism). In the artistic history of Chinese statuary in caves, the images of Confucius and his ten disciples stand out as unique.

The multiple cultural and religious characteristics of the Dazu Rock Carvings are reflected in the great synthesis of Buddhism, Daoism, and Ruism—the deep flavor of esoteric Buddhism, the Sinicized illustrations of Buddhist sutras, the popular belief in Guanyin, and the rich content of local belief. This melding of the three main religious schools is evident in the Shizhuan mountain caves. Cave no. 2 of the Miaogao mountain houses statutes representing the founders of each of the three religions: Sakyamuni, Laozi, and Confucius. They are seated together, paying their respects to one another. One can see that they are delivering sermons, discussing their respective way, or dao, and explaining their respective works.

In the lecture hall of the Baoding mountain cave of exoteric Buddhism, the religious spirit of Buddhism, Daoism, and Ruism are brought together in a unique way. For example, the “Illustrated Sutra of Skillful Means on the Buddha’s Repayment of Kindness,” the “Illustrated of Sutra of Parental Benevolence,” and the “Illustrated Sutra of Hell,” each uses the form of a Buddhist sutra to advocate the Ruist (Confucian) virtue of filial piety. The evocative imagery in the “Herd Drawing” brings together Buddhist doctrines on the emptiness of form and Daoist and Ruist theories of the mind and inner nature, resulting in one of the most wondrous works in the history of Chinese cave art.