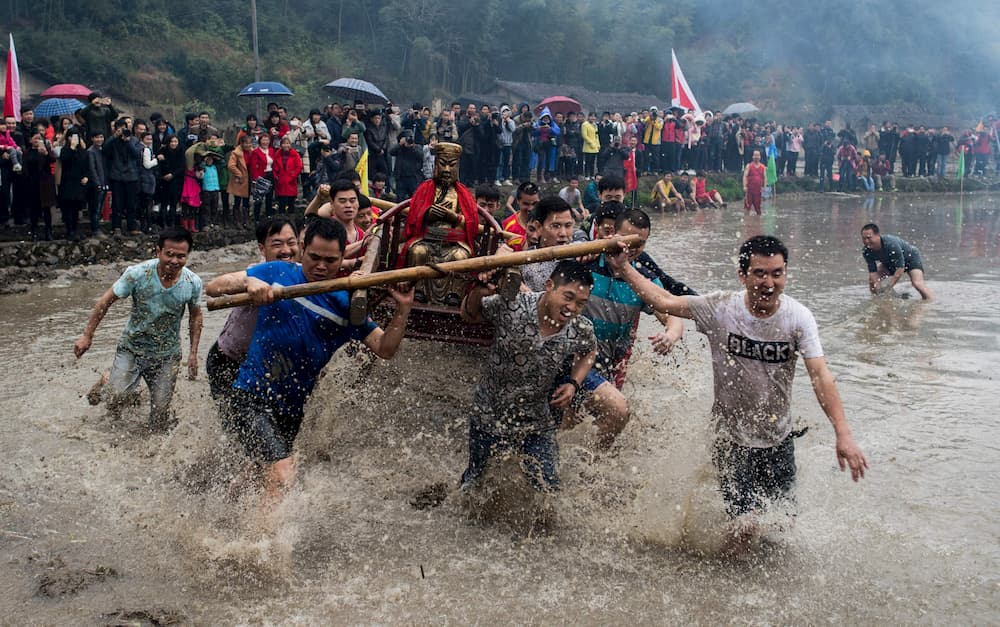 In remote antiquity, a group of snake-worshipping people lived in what is now modern Fujian province. Pre-Qin texts refer to them as the “Min.” This group of people thrived during the Shang (ca. 1600–ca. 1100 BCE) and Zhou (ca. 1100–256 BCE) dynasties but seem to have died out by the late Warring States period (475–221 BCE). At about that same time, a group identified as the Min-Yue people occupied the same area.  Min-Yue culture refers to both the history and culture of the entire Min-Yue people in general, but it also can specifically refer to the same culture during the Qin (221–206 BCE) and Han (206 BCE–220 CE) dynasties when the Min-Yue kingdom flourished.

There is a substantial difference between the Min-Yue culture in Fujian and the culture of the Central Plain region. Living in close contact with the Han Chinese, the Min-Yue did not develop their own written language but borrowed that of the Han. There are various Min dialects and each is identified by the geographical region where it is spoken. The southern Min dialect preserves, to a certain degree, ancient pronunciations; the Fuzhou dialect is the representative of the eastern Min region; the exemplar of northern Min dialect (also called Jianzhou) is the Jian’ou dialect. The Min dialect with its various sub-dialects is one of the eight dialects of modern Chinese.

The Min-Yue people had their own unique habits in food and clothing. Those accustomed to living in coastal areas and alongside rivers constructed elevated buildings on piles. The importance of the snake in Min-Yue culture can be explained by noting that the snake is, to them, synonymous with the dragon.  Many Min-Yue people would invoke the snake/dragon for protection. Customs associated with Min-Yue snake worship are particular short hairstyles, body tattooing, and tooth extraction.

There have been nearly two hundred-thousand years of Min-Yue culture. They were hunter-gatherers who also fished. The people who settled in the Min-Yue cultural area used polished stone artefacts, wove fabric, and made pottery. The discovery of the Wanshouyan sites, dating to the Paleolithic were extremely importing in dating the earliest Min-Yue settlement. The caves contained stone instruments, pottery, shell, and bone implements. These reflect the rich cultural life at the site and are distinctive regional and marine artifacts.

Based on excavations, archaeologists have determined that the Min-Yue king Wuzhu (334¬–111 BCE) built his capital, Yecheng, at the ancient city of Xindian in Fuzhou. The city was situated on the one road leading to Fuzhou. The Xindian Terrace was situated on the narrows of the Lianhua Mountain peak in a suburb north of Fuzhou, giving it a good military advantage.  The terrace was first built in the late Warring States period and was expanded during the early Han dynasty. Although needing repair, it continued to be used through the Song dynasty (960–1279). The discovery of an iron smelting furnace is significant as it is among the earliest archaeological evidence of such a furnace. The discovery proves that King Wuzhu had already mastered ironmaking technology as well as weapon manufacturing (Yue was famous for its swords).

Since the 1980s, a full-scale exploration and excavation at key sites has been underway at Hancheng (Han city) in the Wuyi Mountains. Hancheng would probably have been the command center from where Yu Shan (d. 110 BCE), king of the Eastern Yue kingdom, sent out troops against the Han army. Hancheng was the place from where Emperor Wu (r. 141–87 BCE) of the Han dynasty dispatched his army in all directions to exterminate Yu Shan’s forces. Relics have been found at the site.