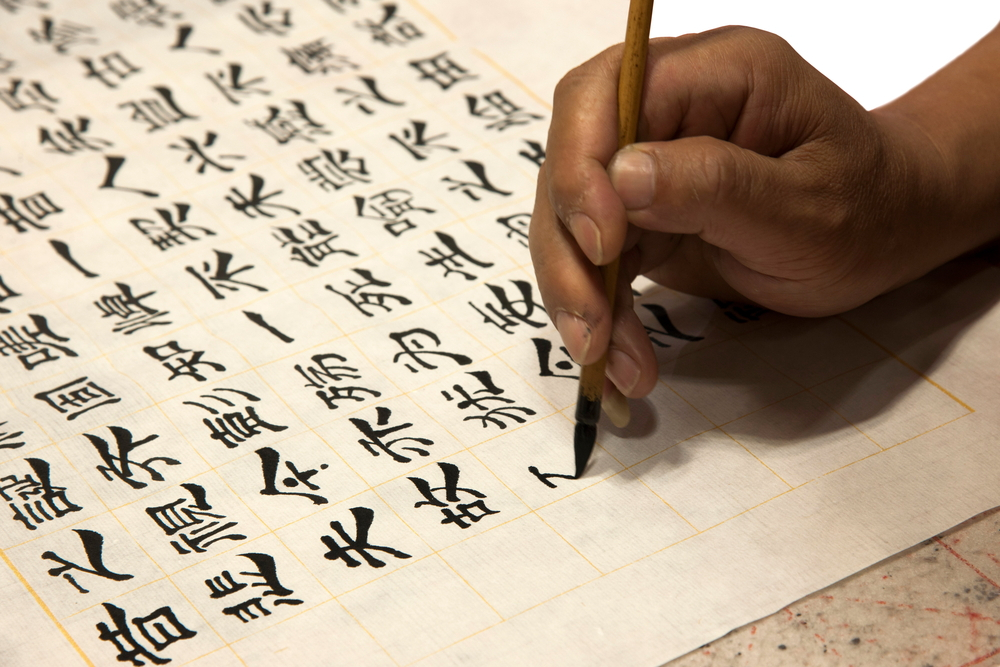 Chinese calligraphy is beautiful writing. There are two important considerations to keep in mind when discussing Chinese calligraphy as an art form. The first is that each character, whether composed of a simple, single-element or complex, combined elements, must fit within an imaginary square. This is true regardless of the style of calligraphy. The second is that the calligrapher employs a brush with a flexible tip allowing wide variation of strokes and dots.

The early Chinese used a style of writing noted for the squareness of its characters. In order to maintain a pleasing look to the writing, they insisted that each character should be balanced, symmetrical, and well-proportioned. With these principles in mind, early calligraphers codified the techniques for using brush and ink as well as the basic rules of writing and positioning a character. Beginning in the Wei (220–265) and Jin (265–420) dynasties, calligraphers began speaking of their writing as having a living body with bones, tendons, flesh, and blood. It embodied their aesthetic ideals and expressed individual style and personality.

Calligraphy is the most popular art in daily Chinese life. It can be seen almost everywhere: signs, newspaper titles, couplets inscribed on plaques or pillars. It has a timeless charm. As calligraphy was developing, critics wrote about it and some of the calligraphers responded. From these discussions, a special theoretical system was gradually formed.

Ruism, Daoism, and Buddhism are the cornerstones of various calligraphic theories. However, the basic premise of all the theories is: calligraphy is a spiritual expression of the person; it treats nature as the “great beauty,” and is the highest form of artistic conception.

Chinese calligraphic art has been created by both renowned artists and unknown scribes. Many manuscripts, beautifully written in kaishu (standard script), were uncovered at Dunhuang. These were written by anonymous copyists, but their level of calligraphy was on par with that of other much-better known calligraphers.

There are many well-known Chinese calligraphers—Wang Xizhi (303–ca. 361), Zhong You (151–230), and Liu Gongquan (778–865) are the most famous. Zhong You was born in a turbulent time at the end of the Han dynasty (206 BCE–220 CE) and the establishment of the Wei. He was skilled in lishu (clerical script), kaishu, and xingshu (running script). The characteristics of his calligraphy have been described as “thin,” “delicate but vigorous,” and “natural.” He was so revered for his writing by later calligraphers that he was considered the “forefather of standard script.”

Wang Xizhi came from a noble family of the Eastern Jin (317–420). He not only enjoyed creating new calligraphic styles, but he also reformed the standard, running, and cursive scripts. The calligraphic style that he created is described as “vigorous and elegant,” and it has become an epitome of Chinese calligraphic art. During the Tang dynasty (618–907), people began referring to Wang Xizhi as the "sage of calligraphy." He is undoubtedly the most influential calligrapher in the history of this art; his works have also had a profound influence on Japanese calligraphy.

Among all the calligraphers of the late Tang dynasty, Liu Gongquan enjoyed the greatest fame. At first, he imitated Wang Xizhi’s style; later, he absorbed the styles of Ouyang Xun (557–641), Yu Shinan (558–638), Chu Suiliang (596–659), and Lu Jianzhi (585–638). The style of Liu Gongquan’s standard script is scrupulous, clear, and upright. Both he and another Tang calligrapher, Yan Zhenqing (709–785), enjoy a great reputation. People describe their writing by saying that “Yan’s writing has muscle and Liu’s has bone.”