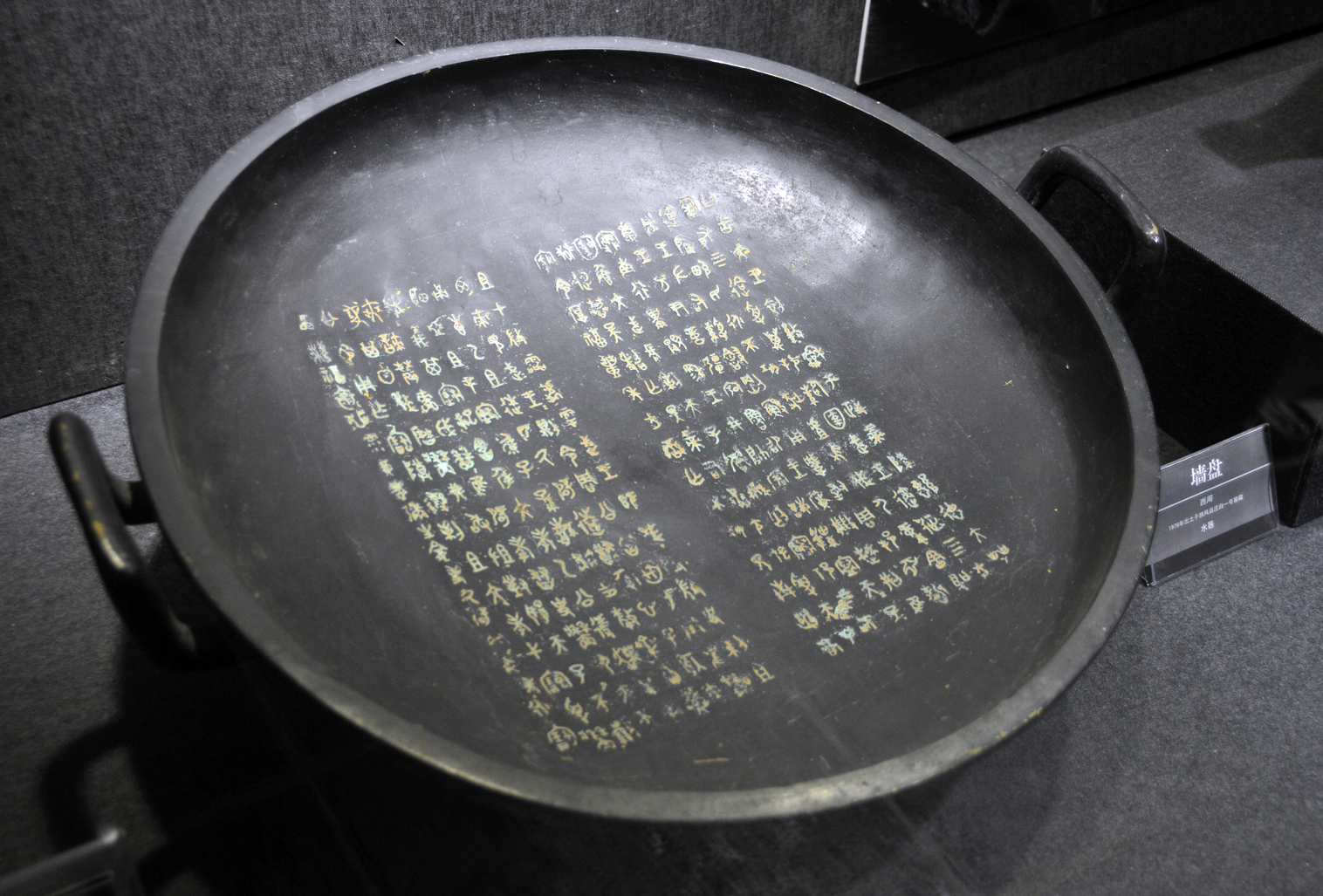 In ancient times another name for China was “Nine Provinces,” which referred to the provinces of Yu, Ji, Yan, Qing, Xu, Yang, Jing, Yong, and Liang. These nine provinces represented the entire realm of China. It was said that Yu, ruler of the ancient Xia dynasty (ca. 2100–ca. 1600 BCE), had cast nine ding-tripods (one for each province) as a symbol of state power. The nine ding-tripods were so important that the founders of the Xia, Shang (ca. 1600–ca. 1100 BCE), and Zhou (ca. 1100–221 BCE) dynasties each had possession of them, successively. Originally a cooking utensil, the ding-tripod was a symbol of power and wealth during the course of the Xia, Shang, and Zhou dynasties. During the Bronze Age, a person’s social status was reflected by the number of ding-tripods he owned. They were so valuable because they were made from a rare material, bronze. The ding-tripod’s weight, indicating the quantity of bronze used to make the ding-tripod, signified how powerful a person was.

The term “bronzes” refer to vessels, implements, and other items made of the copper alloy called bronze; the period in which they were first emerged is called the Bronze Age. Bronzes can be found all over the world. The earliest were made six thousand years ago in the ancient city of Babylon, in modern Iraq. The earliest known bronze implement found in China is a single-blade knife excavated at the Majiayao cultural site in Gansu. It also has the distinction of being the oldest bronze knife found in the world. In China, the Bronze Age encompasses the Xia, Shang, and Western Zhou (ca. 1100–770 BCE) dynasties, the Spring and Autumn period (770–476 BCE), and the early years of the Warring States era (475–221 BCE). It lasted more than 1,600 years.

Chinese bronzes emerged in the late Neolithic period (ca. 8500–ca. 2070 BCE) and remained popular well into the Qin (221–206 BCE) and Han (206 BCE–220 CE) dynasties. Bronze vessels and weapons did not appear until the Xia dynasty. The most exquisite bronzes were produced during the Shang and Zhou dynasties. Bronze art reached its pinnacle in the mid-Shang period with a rich variety of vigorous and dignified shapes. The length of inscriptions on bronzes was gradually increased, and the designs were elaborate and magnificent. Most Shang bronzes were ritual vessels, exclusively used for ceremonies and sacrifices by the royal family and other nobles. The size, shape, combination, and number of bronzes signified the owner’s rank and political status. It was believed that bronzes aided communication between heaven and earth, and sustained political power. On some of the vessels, animal decorations were cast in bas-relief. The Shang believed that animals could act as intermediaries between themselves and ancestors and other spirits; the spirits were thought to be able to preserve the power and wealth of the worshippers. As the artistry of bronze vessels reached its peak during the Shang dynasty, bronze smelting and casting technology also matured. The number of bronzes, unearthed and handed down, is in the tens of thousands. The craftsmanship of the famous “Simuwu ding-tripod” and other large bronzes is exquisite: the shape is unique, and the designs are magnificent. Comparable pieces have rarely been seen in the history of bronze casting anywhere in the world.

Bronzes went through a transitional phase between the late Warring States and the Han dynasty. At this time, traditional ritual systems had completely fallen apart and ironware was in wide use. Toward the end of the Eastern Han period (early third century), improvements in pottery made it more popular and bronze utensils were no longer used daily. As for weapons and other implements, ironware was already in a dominant position.

Beautiful, inscribed bronze mirrors were made during the Sui (581–618) and Tang (618–917) dynasties. Except for these mirrors, there was little other use for bronze. Today, bronzes are precious cultural relics. The Chinese government has formulated a series of policies and regulations to protect them and exercises strict control over their circulation. Currently only two categories of bronzes may be legally traded on the market: those bronzes excavated before 1949 with a clear provenance and documentation; and those returned to China from overseas. These regulations have made domestic sales of bronzes somewhat tepid and caused collectors to sell bronzes privately. It has been a number of years since Chinese collectors have entered the international auction circle, and Chinese bronzes have been gradually recognized by the world market.

Ancient Chinese bronzes are one of China’s great contributions to material civilization. Although archaeological data indicates that bronzes emerged earlier in other places, in terms of utility, casting technology, modeling, forms, and styles, Chinese bronzes are incomparable and occupy a unique position in world art history, attracting worldwide attention.