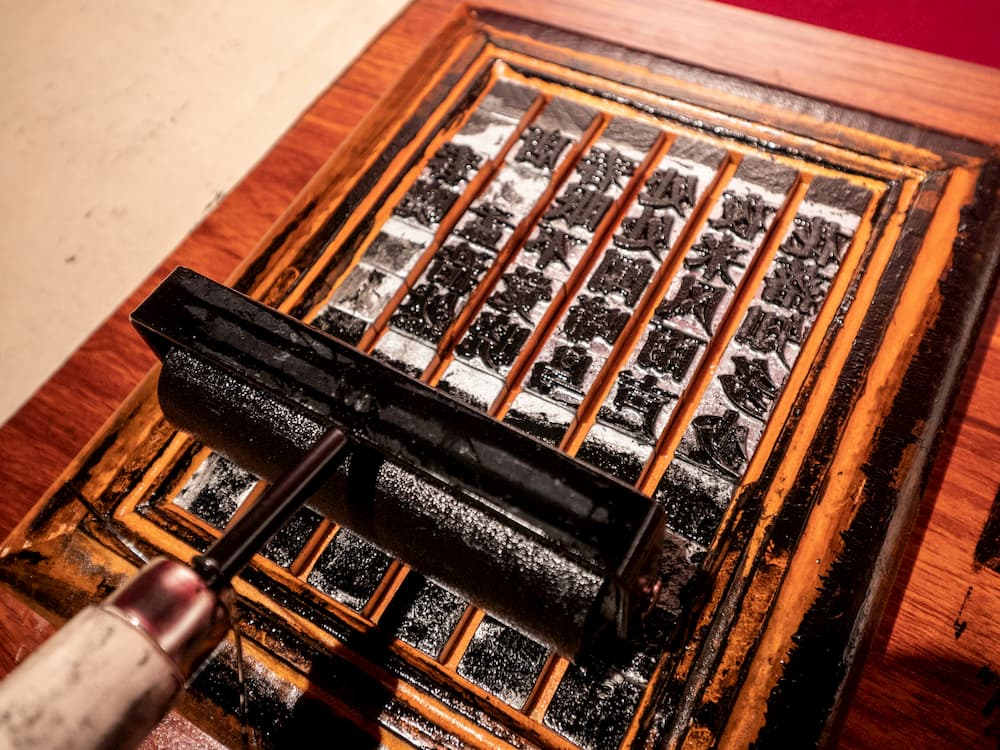 Before the invention of printing in China, there was a long history of copying reading materials by hand. However, hand-copying has obvious disadvantages such as the enormous consumption of time and energy, mis-transcriptions, and missing content. Therefore, there was a pressing need for new technologies to duplicate documents and printing was invented as a result.

In the Southern and Northern Dynasties period (420–589), Daoist practitioners carved numerous graphs on wooden stamps and used these to produce paper amulets containing words and illustrations. This practice eventually evolved into woodblock printing. This Chinese invention was gradually transmitted to neighboring countries before reaching Western Asia and Africa, and finally spreading throughout Europe and the world. The period of the Sui (581–618), Tang (618–907), and Five Dynasties (907–960) marks the inception of woodblock printing. According to archaeological artifacts and historical records, Tang woodblock prints include mainly reading materials, items for religious and daily use such as Buddhist scriptures, almanacs, reference books for language learning, and various bills and financial agreements. Woodblock printing in the Five Dynasties and Ten Kingdoms (ca. tenth century) was developed on the basis of the Tang achievement but also saw new breakthroughs. The printing of the jiu jing (nine Ruist classics) under the auspices of the government was a hallmark of the Chinese printing industry because the scope of printing was extended from religious works to books attributed to sages and men of virtue. The popularity of woodblock printing paved a foundation for the advent of the golden age of printing in the Song dynasty (960–1279). In the history of Chinese printing, the Song marks printing’s full maturity. A single run of woodblock printing could produce several hundred or even thousands of copies of books. The technology thus played an important role in the dissemination of culture. However, the industry had disadvantages such as the time and work involved, the need to store the woodblocks which, even though warehoused, could still be damaged because of internal material weaknesses or pests. In addition, any error on the carved block could result in the re-carving of the whole block. These problems prompted the invention of movable type technology in the Northern Song (960–1127). During the Yuan (1271–1368), Wang Zhen(王禎 )(1271–1333) brought the technique to perfection by creating a revolving storage device for typefaces, which speeded up the typesetting process. In the Song, the range of printed materials was extended to Ruist, Buddhist, and Daoist works as well as those of other thinkers. In addition to printing books and woodblock prints, this period also saw the beginning of the printing and distribution of banknotes. The quality and varieties of printing paper during this period surpassed that of previous dynasties and advanced techniques for printing resulted in high quality products, which became a model for later generations and laid a foundation for the industry’s development in the Ming (1368–1644) and the Qing (1644–1911) dynasties.

Woodblock printing techniques further matured in the Ming-Qing period. This period witnessed a rapid increase in the number of illustrated books. This was mainly ascribed to the development of the polychromatic overprint technique, which was able to reproduce an entire piece of art. In the course of development, woodblock prints became a highly refined art, not only because of the skills required to capture images and themes, but also because of the layout and carving style. An exquisitely carved print required not only skilled craftsmen, but also artisans who had great artistic cultivation. This is evidenced by Chinese collage color printing, which requires the teamwork of the designer, carver, and printer who all have a thorough understanding of the original artwork. Woodblock printing is practical and aesthetic and often represent specific vogues of a given period. In addition to the development of polychromatic overprinting, the Ming-Qing period also saw a revival of the techniques of movable typesets made from clay, wood and metal. This triggered a large trend of large-scale printing using wood and copper typefaces. The Ming-Qing period saw the formation of standard typefaces, namely square-shaped characters with slim horizontal strokes and thick vertical strokes. This standardization was a sign of advancement in printing.