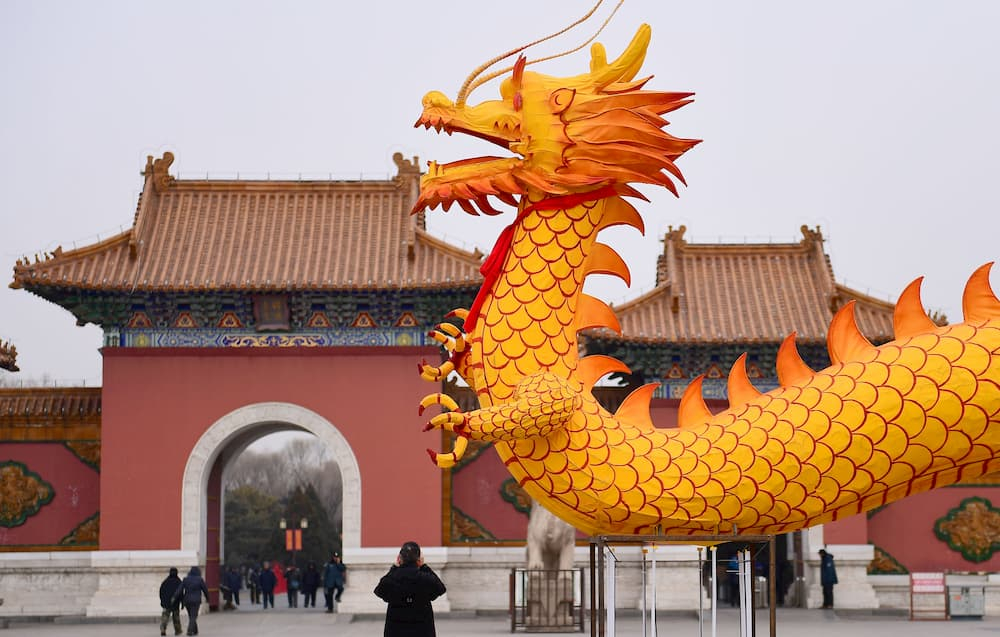 Chinese dragon culture, which represents China’s cultural spirit, spans more than eight-thousand years. During these millennia, the dragon lived in the daily lives of millions of people and many dragon folk customs took shape. Among these customs, the oldest one is the dragon as a totem. In addition, many legends and myths about dragons circulated among the people. These stories touched upon a variety of topics including the Dragon King and his children, palaces, and balls, among which those about the Dragon King makes up the bulk of dragon tales. The portrayal of the dragon has gone through a myriad changes.

Dragon culture is inseparable from daily life and there is no shortage of dragon images during holidays and other festivities of the lunar calendar. Special events are commemorated by a dragon dance, but there are many festivals associated specifically with dragons in China. One of them is the Spring Dragon Festival on the second day of the second month, also called the “Dragon-Head-Raising Festival.” The dragon dance is performed all across the country during the Spring Festival, which reaches its climax during the Lantern Festival. During the fourth month, the lively drunken dragon dance is performed from the seventh to the eighth day in Macau. The Dragon Boat Festival, which falls on the fifth day of the fifth month, is celebrated throughout China.

The dragon appears not only at festivals, but also in the language—many idioms include the word “dragon” and it also appears in many personal names, not to mention its use as a family name by the Han-Chinese as well as the Dong, Zhuang, and Miao ethnic groups. “Dragon” can be found in the names of food, clothing, shelter, and transport. Geographical names using “dragon” are too numerous to count.

Not only do the Han-Chinese worship the dragon, but the vast majority of ethnic groups in China do so also. The ancient Xiongnu capital was called the “Dragon City.” The Xianbei people, who formed one of the major kingdoms of the Northern Dynasties (386–581), also worshiped the dragon. The founder of the Later Zhao (319–351) regime, Shi Le(石勒) (274–333) who was of Jie ethnicity, gave himself the zi (style name) “Jilong.” This name incorporates the word long (dragon) and indicates that the Jie people also worshiped the creature as a god. The Baiyue, the oldest ethnic group in the south, were known for worshiping the dragon. Another ancient ethnic group, the Miao, in addition to celebrating the Dragon Boat Festival, also like to wear dragon robes. There are nearly one hundred types of dragon-themed garments and accessories in their collective wardrobe. In fact, many ethnic groups, like the Han, invoke dragons when they pray for favorable weather, and the safety of humans and livestock.

Dragons exist in both the East and the West, but their shapes and characteristics are not quite the same. Dragons in the East are generally related to the Chinese dragon, which bears little resemblance to its Western counterpart. Western dragons tend to be multi-head, fire-breathing, and are known to eat humans. Despite this tendency, there are also some Western dragons that are similar to that of the Chinese dragon in their bearing. The Great Dragon of the East is found primarily in China. Dragons are also found in the two Koreas, Japan, Vietnam, Laos, Cambodia, Burma, Malaysia, Indonesia, the Philippines, and the islands of the South Pacific; even Native Americans have dragons in their folklore. The shapes, characteristics, and functions of dragons in all these countries are pretty much the same as that of the Chinese dragon.

In ancient China, the Chinese dragon was a totem that became a symbol in later times. However, the spirit of the dragon is consistent—it has always been embodied in the daily life of China’s sons and daughters—the descendants of the dragon. The dragon symbolizes the three national spirits of the Chinese: the great spirit of harmony even among different views, the transcendent, creative, and lofty spirit of striving to excel, and, with the phoenix, the spirit of prosperity.