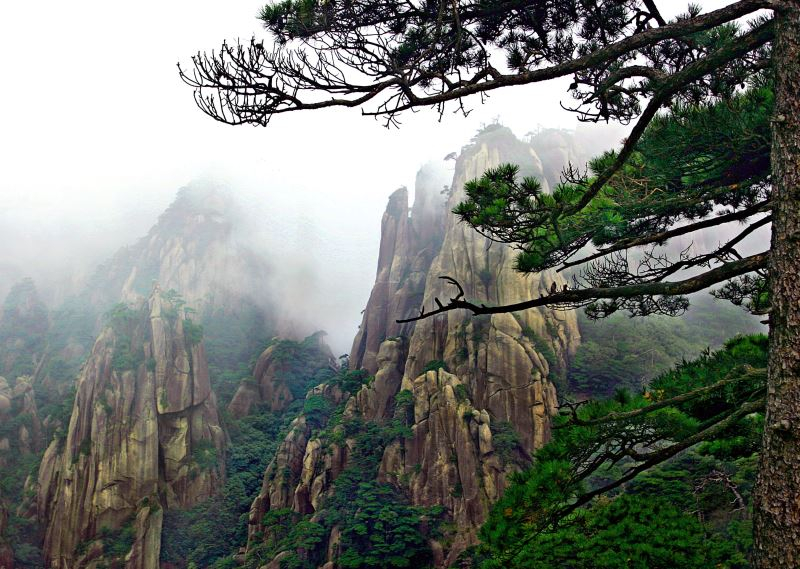 Mount Sanqing (literally “three clarities), in Jiangxi province, with its outstanding scenery, is the main peak of the Huaiyu Mountain Range. Its name derives from Yujing, Yuxu, and Yuhua, the three steep peaks that sit atop the mountain like the three highest Daoist deities (the Three Clarities). It is listed as a National Geopark and a National 5 A-class tourist area; it is inscribed on the UNESCO World Heritage List, and it is also a World Geopark.

The Mount Sanqing scenic area covers 229.9 square kilometers but its core area consists of just 76.8 square kilometers. There are more than 260 scenic spots. Some of these are natural, such as the Tiyun Ridge, Nanqing Garden, Wanshou Garden, West Coast, Sunny Coast, Bingyu Cave, Sandongkou, and Yujing Peak; others are manmade and include the Sanqing Temple, Xihua Terrace, Yuling Daoist Temple, statues carved into the cliffside, rock and stone carvings, and masonry buildings. In the past, many poets and writers were inspired by the scenery to take up their brushes to write or paint their praise.

Mount Sanqing is revered by Daoists and in the past was frequently chosen as a site at which they would carry out austere religious practices (e.g., seeking transcendence). The choice of Mount Sanqing as a site for these religious practices began soon after the Daoist thinker Ge Hong (284–364) visited the mountain in the Jin dynasty (265–420). During the Song (960–1279), Wang Lin (n.d.), a descendant of Wang Jian (fl. ca. 873–888, governor of Dingzhou in the Tang dynasty), contributed money for the construction of a Daoist temple on the mountain. The temple and its complex eventually fell into disrepair. During the Jingtai era (1450–1457) of the Ming dynasty (1368–1644), a descendant of Wang Lin, Wang Hu (1423–1515, Ming dynasty Daoist), rebuilt it. Daoist buildings dot the mountain landscape, from Buyun Bridge at the base to the Heavenly Gate at the summit; all together, there are more than 230 buildings and structures. Among the architectural works are temples, pavilions, temple gates, and bridges; these are complemented by artistic works in the form of sculpture and stone carving. Mount Sanqing has been referred to as an open-air Daoist museum. In 2013, ancient buildings on the mountain were listed among the seventh group of Major Historical and Cultural Sites Protected at the National Level.

Mount Sanqing is a granite peak forest landform—these peaks and unusual rocks are its most prominent feature—they are an amazing natural formation that look as if they were placed there by supernatural beings. The most famous of these peaks are Spring Goddess, Giant Python Emerging from the Mountain, Myriad Tablets Facing the Sky, Guanyin Enjoying Music, Ge Hong Presenting Elixir, and Monkey King Viewing Treasures. In addition to these peaks, there are beautiful deep valleys and water features that were formed as geological forces played out in the region. These serene valleys and green lakes mostly appear where tectonic faults and joints converge. In front of the Sanqing Temple are the “Three Ponds of Flowing Rosy Clouds”—Hanxing Pond, Qinghua Pond, and Qinghui Pond. They reflect the color of the surrounding scenery and sky and blend into a single color resembling clouds in the sky. These stunning natural formations are reasons that the Mount Sanqing granite landform was listed as a National Geological Park in 2005 and a World Geopark in 2012.

In 2008, the UNESCO World Heritage Committee, when considering Mount Sanqing for inclusion made the following remarks: Mount Sanqing National Park displays a unique array of forested, fantastically shaped granite pillars and peaks concentrated in a relatively small area. The looming, intricate rock formations, intermixed with [the] delicate forest cover and combined with ever-shifting weather patterns create a landscape of arresting beauty.” Mount Sanqing was awarded the previously mentioned designations from UNESCO not only for its extremely rich forest resources, and unique granite peaks but also for its large number of rare and endemic wildlife.

The indigenous people of Jiangxi, the She ethnic group, and immigrants from southern Fujian and Huizhou have lived in this region for a long time. A number of rich and colorful folk activities have resulted from this integration of peoples. In addition to influences from these various groups, Ruism and Daoism have also contributed to the local customs. 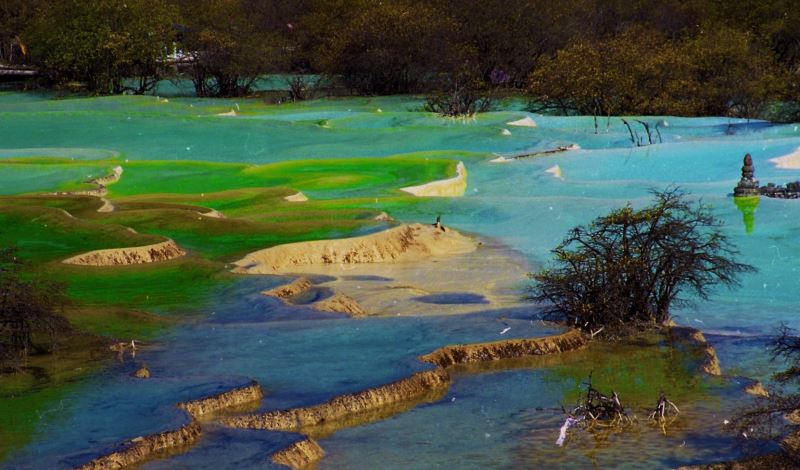