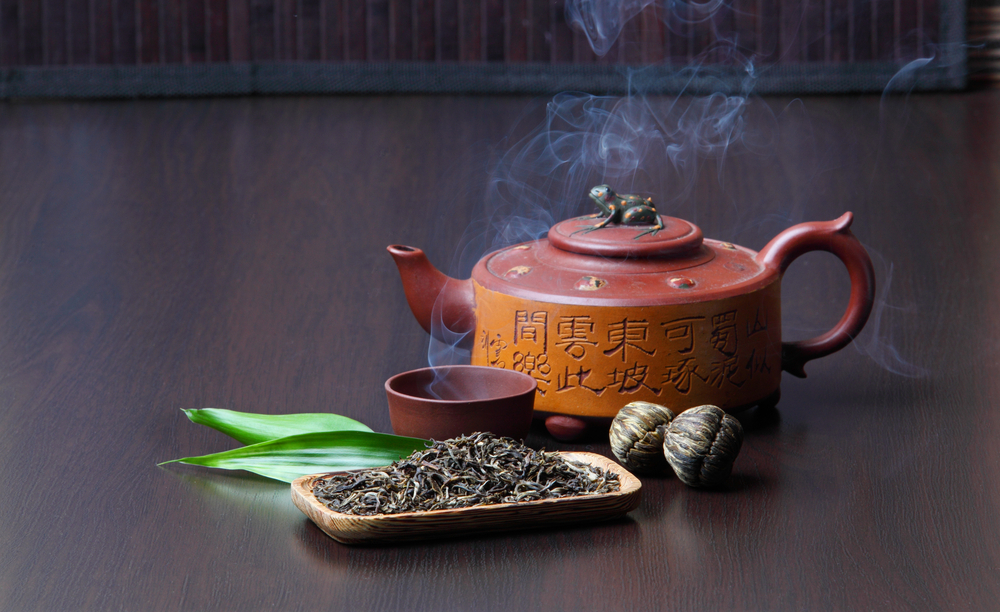 The tea plant (Camellia sinensis) originated in China and the Chinese were the first to discover that the leaves could be used not only for medicinal purposes but also as an aromatic beverage. Not only is tea the “national drink” of China, it is also a favorite beverage of more than half the world’s population.

Among the three major non-alcoholic beverages, tea ranks first; more than fifty countries in the world cultivate the plant. Tea and tea appreciation were first introduced to the world, either directly or indirectly, from China.

Tradition says that tea leaves were widely used for medicinal purpose as early as 5,000 years ago during the legendary Shennong (Divine Husbandman) era. In the Western Zhou period (ca. 1100–771 BCE), tea was not only used as medicine and as part of sacrificial offerings, but it also began to be used as a drink. Tea drinking became widespread during the Han dynasty (206 BCE–220 CE), and soon became a commercial commodity. In the Tang dynasty (618–907), the custom of drinking tea became even more prevalent, and the tea trade flourished. Because of the large number of court officials drinking tea, “tribute tea” emerged. This was tea grown in remote rural areas that was sent as a gift to the imperial court. From the Song dynasty (960–1279), tea has been a daily necessity of the people in China.

It is worth mentioning that tea drinking during the Tang and Song dynasties was far more sophisticated than it is now and connoisseurs of those times were far more engrossed in tea drinking. Lu Yu (733–804), who is known as the sage of tea, wrote the first book about tea connoisseurship. During the Song dynasty, competitions were held to judge the production and craftsmanship of tribute tea. Members of the literati, such as Su Dongpo (1037–1101), and even Emperor Huizong (1100–1126) wrote about the drink.

Tea drinking is a spiritual enjoyment which is also an art. People in ancient China paid special attention to five steps of tea drinking: selecting the tea, choosing the water, preparing the tea instruments, making the tea, and sipping the tea.

The Chinese “way of tea” consists of two aspects: the technical and the spiritual. The technical aspect refers to the processing, making, and tasting of the tea; the spiritual aspect refers to improving a person’s moral cultivation, through the etiquette of tea drinking. Moral cultivation is at the heart of Chinese culture—it is an integration of Ruism, Daoism, and Buddhism. The spirit of Ruism expounds on and develops the implicit political functions in Chinese tea culture . Through sipping tea, one can realize the principles of “self-cultivation, putting one’s family in good order, the proper administration of state government and bringing peace to the world .” Daoism has also made some important contributions to Chinese tea culture, especially in the realms of art, philosophy, observing nature , and health. Buddhist tea culture helps one to understand the true meaning of the “way of tea.” By understanding the suffering of life from tea, one can finally realize the right “way .”

Tea in Chinese culture is ubiquitous. The literati loved tea because the essence of tea is light, refreshing, tranquil, peaceful, and reserved. Tea forms ties with various cultures, and creates its own numerous sub-cultures. Tea has been written about in nearly every major literary genre: poetry, ci (song lyrics), songs, and fu as well as belles-lettres, fiction, and drama. There are also numerous paintings about tea-related activities, such as Tang Bohu’s (1470-1524), calligraphy copybooks with tea as a theme, and folk dances about tea production and drinking. Tea was a favorite topic; for example, it is mentioned in Tang dynasty poems, the late Yuan and early Ming dynasty writers known as “the Four Talents of the Wu Region ,” namely Yang Ji (nd), Gao Qi (1336–1374), Zhang Yu (1333–1385), and Xu Ben (1335–1393), and the Qing dynasty novel Honglou meng (Dream of the red chamber). Even today people still take delight in talking about such literary and artistic works.