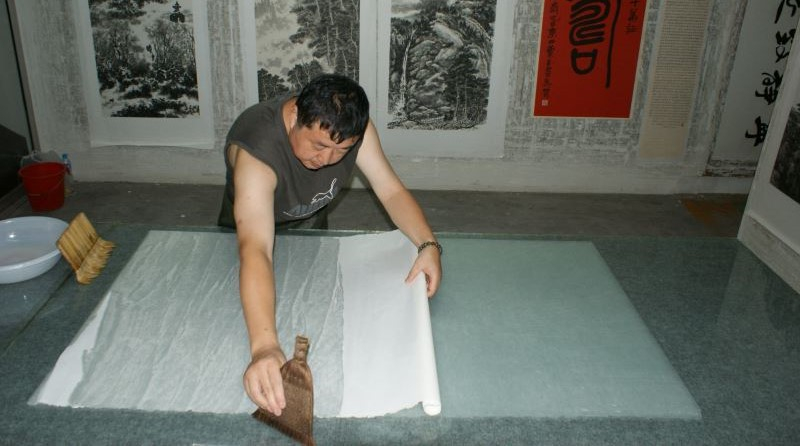 The Xuan paper is just one member of the large family of Chinese handmade papers. It was named after Xuanzhou, in modern Anhui province, where it was first produced. As early as the Tang dynasty (618–907) the paper of Xuanzhou was sent as tribute to the imperial court. Xuan paper was first mentioned by Zhang Yanyuan (815–907) in his Lidai minghua ji (Records of eminent paintings from previous eras). Thereafter, numerous references to it are found in documents from every succeeding dynasty. In 2009 this traditional handcraft was inscribed on the list of Intangible Cultural Heritage by the United Nations Educational, Scientific, and Cultural Organization.

The principal raw materials for the Xuan paper include the bark of blue sandalwood trees (Pteroceltis tatarinowii Maxim.) and rice straw. The process is quite complicated: the raw materials need to be processed and turned into “burnt bark” and “burnt straw,” which are then made into slurries and mixed. Various plant materials, including Chinese gooseberry cane, are added to the mixture which allows the wet sheets to be stacked on top of one another without sticking. From the gathering of raw materials to completion, two years and more than one hundred steps are required to produce the paper. This craft may be regarded as the most complicated in the process of handmade paper; it is also typical among other kinds of traditional craftsmanship. The screens used for producing sheets of paper demonstrate the cultural connotation and values of craftsmanship of this technique.

Xuan paper is categorized by the ratio of raw materials, its thickness, and its size. There are three categories: “special pure,” “pure bark,” and “cotton.” The full name of the first one is “special pure bark” and refers to a slurry composed of at least 80 percent bark. “Pure bark” refers to a slurry containing just 50 to 60 percent bark, and “cotton” refers to a slurry with even less bark, only 20 to 30 percent. Xuan paper may be categorized according to thickness, falling into such categories as “single-layered,” “double-thickness,” “triple-thickness,” and so forth. These terms may not always be consistent. For example, “two-ply” may be understood as paper that is produced as a single layer but is folded during the drying process; however, it may also refer to paper that is thickened during production. The thinnest Xuan paper is called “cicada’s wing” and weighs half of an ordinary “single-layered” sheet. The Xuan paper family includes a variety of important types of paper. They include various binder sheets and fan paper, which are made using “cooked” Xuan paper which is unbleached (aka “raw” Xuan paper).

Xuan paper production was influenced by papermaking in the surrounding areas. This was especially true when Chengxin tang paper became popular. Its origin can be traced to the towns of Huizhou and Chizhou, both of which were located near Xuanzhou. It was first produced during the reign of Li Yu (937–978), the last emperor of the Southern Tang dynasty (937–975), and was manufactured by the official workshop exclusively for imperial use. In the Northern Song (960–1127), paper manufacturers in the area of Xuanzhou vied with one another to imitate Chengxin tang paper; this trend resulted in the new production techniques finding their way to the makers of Xuan paper. In the Ming dynasty, the papermaking industry thrived in Huizhou and Guangxin prefectures, which were adjacent to Xuanzhou. This also had a definitive influence on the production of Xuan paper.

Along with writing brushes, ink, and inkstones, Xuan paper, representative of all handmade paper, is one of the four traditional “treasures” of the scholar’s studio. These mutually dependent items are the most important elements in traditional culture. In this sense, one can open a window into traditional culture by understanding the production techniques of Xuan paper.

Xuan paper is essential for Chinese painting and calligraphy; machine-made paper has not been a suitable substitute. Xuan paper’s special attributes have contributed greatly to these two arts.