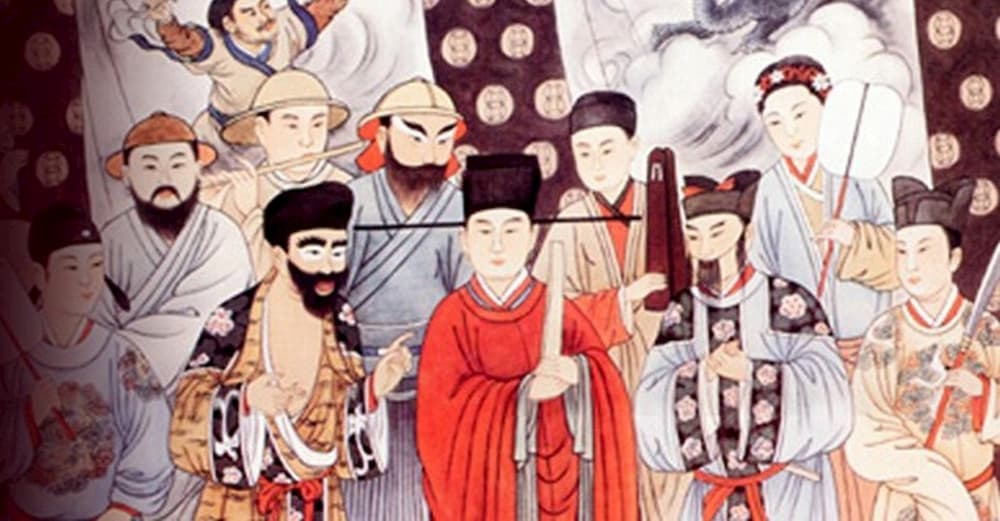 After enjoying the Shao music performance in the state of Qi, Confucius (551–479 BCE) was so possessed that he could not enjoy the taste of meat for three months. He said: “I never expected that music could reach such levels.” What kind of music actually reached this high level, lingering in the sage’s mind for so long? Nowadays we know that Shao was a genre of ancient music prevalent among the nobility. Confucius himself was musically proficient and quite competent at analyzing music; therefore, it should come as no surprise that he was so taken with Shao.

Chinese music has a long history. The archeological discovery of Pithecanthropus fossils in Yuanmou, Yunnan province has taught us that humans began spreading out and working on the land of China a million years ago. When the earliest humans started to make primitive tools and work in groups, music began in the rhythm and chanting of their laboring. Beliefs about prehistoric music in ancient documents may be roughly divided into two categories. The first is that ancient music was named after certain clans, such as the music of the Zhuxiang, Yinkang, Getian, and Yiqi clans. The second belief is that each mythical ruler such as the Yellow Emperor, Zhuanxu, Di Ku, Yao, Shun, and Yu had a music particular to their reign. Popular music, which mainly featured singing and dancing, saw its inception in the Qin and Han dynasties and reached its zenith in the Sui, and Tang. This rise of popular music reveals an interesting trend which went against the traditional Confucian views preferring more elegant and stately music. Cao Cao (155–220) and his sons were lovers of “harmonizing songs,” where one composed lyrics to musical accompaniment or a musical pattern. Cao Cao himself wrote lyrics to musical patterns to express his deepest feelings. The Cao’s were seen as preferring the popular and, in time, this gave rise to Ji Kang’s (223–262) “A Disquisition on Music Representing neither Sadness nor Happiness.” This is a treatise on musical aesthetics that represented new thinking. It strove to break the hold that Confucian music, most typically described in “Yue ji” (Notes on music), had on culture. Ji Kang’s essay sought legitimation for the popular music that was referred to as “music of the states of Zheng and Wei” and “music of fallen states.” Ji Kang’s views were supported in the writings of Li Shimin, Emperor Taizong of the Tang (r. 626–649). Taizong argued that it was impossible that a song such as “Yushu houting hua” (Jade trees and flowers in the rear courtyard), which belonged to the genre of “music of fallen states,” would make his subjects, who lived in a golden age, feel sad. Nor did he think that these songs would inevitably lead the empire to ruin. Therefore, Taizong and his ministers adopted an open policy towards music although some saw it as “valuing the vulgar and belittling the elegant.” This encouraged the development of Tang music which was comprised mainly of yanyue, or festal music. Festal music of the Sui and Tang times was a collective term for court music that was made up of popular music for the enjoyment of the ruling class. It included music of various ethnic groups, including the Han, as well as music from foreign countries. In this period, Chinese music reached a historic high point through frequent interactions between the Han and other ethnic groups.

Musical instruments are mentioned in some of China’s earliest legends. Those mentioned include: drums, chimes, bells, xiao flutes, guan pipes, xun (a wind instrument made of clay), chi flutes, sheng panpipes, zithers, and psalteries. Although these stories are inevitably mixed with apocryphal elements, archaeological discovery of prehistoric musical instruments does show that these instruments existed in earliest times. Take the “bone pipe” dated from 8,000 to 9,000 years ago as an example: twenty-one bone pipes were unearthed at a burial site in Jiahu village, Wuyang county, Henan province. There were all made from the ulnae of cranes; many of them had seven holes drilled into them. They are currently the earliest musical instruments so far discovered. This fact shows that music in ancient China had already reached a high level of development.

The “Yue Ji” (Notes on music) in Li ji (Book of rites) says: “Music represents the harmony of heaven and earth; the rites represent the order of heaven and earth.” Order and harmony are two of the most important concepts in Chinese civilization and the core of the system of rites and music. Music, it was felt, could make one’s mind sober, open, and uncontaminated. Through rites, music, and art, the state could bring peace, cultivate good customs and obedience among the people. This mellow and rich music with such a long history carries with it the teachings of loyalty, filial piety, benevolence, propriety, and faithfulness. It also represents the ancients’ unswerving humanistic pursuits.