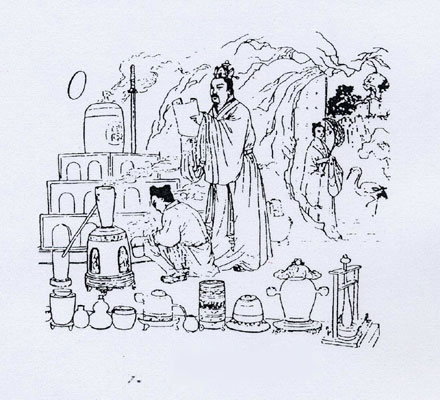 In ancient China, the relevant practical knowledge of chemistry and its related technology came primarily from the accumulated experience of craftsmen. Concepts and hypotheses of chemical changes sprouted and evolved from the analytical thinking and debates in which they engaged. As a science of the composition of matter, structure, function, and application, chemistry is the most basic of the natural sciences. Engaging in manual labor over lengthy periods of time, people observed many natural phenomena, including chemical changes. Gradually, they accumulated a great deal of experience such as how to select, process, and utilize various materials based on their chemical functions. This accumulated experience formed the early knowledge of applied chemistry. After Antoine Lavoisier (1743–1794) initiated the chemical revolution, and the British chemist John Dalton (1766–1844) proposed the atomic theory, the large framework of modern chemistry was essentially completed. By the end of the nineteenth century, modern chemistry had formed a relatively complete theoretical system. However, there is no modern chemistry without ancient chemistry and the contributions made by the ancient Chinese are outstanding.

Alchemy is regarded as the forerunner of chemical science. Both Western and Chinese alchemy concerned themselves with immortality. In China, alchemists sought an elixir of immortality that would prolong life indefinitely; it was also viewed as a preparation that would change metals such as copper, iron, tin, and lead into gold or silver. Such activities provided know-how for later generations to comprehend many chemicals and the ways they interacted with one another. The use of fire marks the beginning of humans manipulating the natural world. Regardless of the civilization or region, all people used fire to bring about chemical reactions. At first, primitive people discovered that by striking stones together, sparks are easily produced and could be used to start fires if there were suitable dry materials to burn. Even in the first half of the twentieth century, some ethnic groups, such as the Li people on the Hainan Island and the Wa people of Yunnan province still started fire by drilling wood. Beginning in the bronze age, people used concave bronze mirrors to focus sunlight and start fires. Later, people discovered that striking steel on flint would also produce fire. The earliest nitrate chemistry can be found in the firing of pottery, porcelain, glass, and other craft products. Through the chemical reactions which occur at high temperature, the clay (which contains mica, quartz, and feldspar) loses its crystallization water, and changes to the crystalline structure would appear. This not only alters the form of natural substances, it also changes their intrinsic quality. Broadly speaking, this creative work is not only a chemical process, it is also the earliest chemical production by humans.

Metallurgy in ancient China cannot be ignored. It involves a wide range of metals, complicated applications, and exquisite workmanship. It includes copper smelting, ferrous metallurgy, steelmaking, copper-zinc alloys, zinc, gold, silver, lead, and tin. In the eyes of ancient people, naturally red copper ore was just an unusual, hard-to-break, shiny red stone. Smelting can change the shape of red copper; this transformation aroused people’s interest in the ore. By smelting a piece of copper ore, people gradually mastered the technology to produce copper. Chemical technology in ancient China covered all aspects of life. For example, the condiments commonly used in our daily life such as soy sauce, salt, sugar, vinegar, liquor, and other seasonings are all made through various chemical reactions and processes. Ink, one of the “four treasures of the scholar’s studio” (the other three are writing brushes, ink stones, and paper), is made from two materials: carbon black and glue. After the Northern and Southern Dynasties (420–589), ink-making technology was continually refined and became a unique technological process.

Although theoretical and applied chemistry have long been separate, the development of each is marked with its own unique ups and downs over a long period. But with the passage of time, both revealed their unique contributions. Modern chemistry was established on an ancient scientific basis: the mathematical, logic, and experimental traditions of ancient sciences, which were combined with systematic observations and meticulous experiments, led to systematic and scientific theories based on experimental facts.