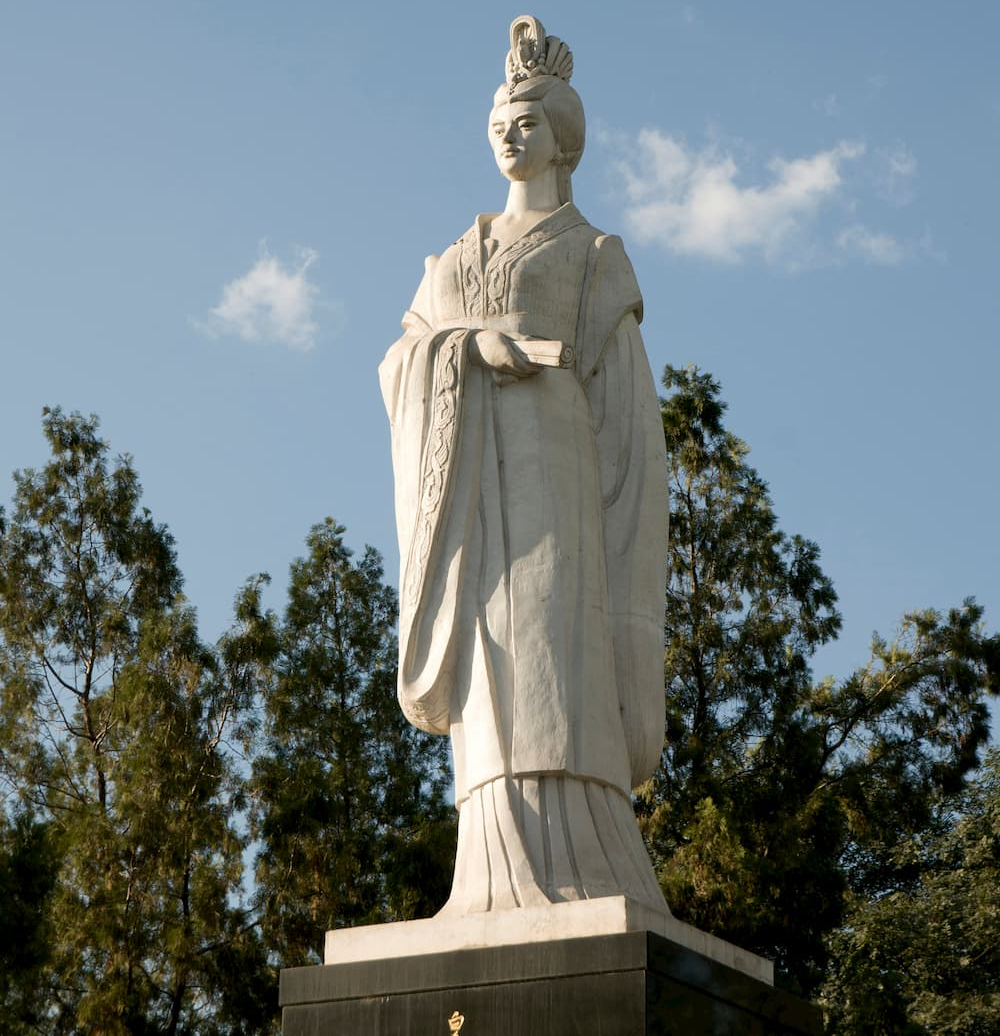 Wu Zetian (624–705, r. 690–705) reigned for decades as the only female monarch in Chinese history. She made great contributions to the unity and prosperity of the Tang dynasty (618–907) by developing its economy, culture, and art. Her rule in the male-dominated feudal age, however, has made her a controversial figure both in her lifetime and afterwards.

Wu Zetian was born in 624 in Chang’an, the Tang capital. At the end of the Sui dynasty (581–618), her father participated in the Taiyuan uprising led by Li Yuan (566–635) who would later become Emperor Gaozu (r. 618–626) of the Tang. Due to his contributions to the founding of the Tang, he was appointed minister of public works and married the daughter of a former Sui chancellor.

Endowed with extraordinary beauty, Wu Zetian was summoned into the palace by Emperor Taizong (r. 626–649) at age fourteen. Favored by the emperor for her graceful charm, she was called “Wumei” (Charming Wu), and later called “Wumeiniang” (Consort Charming Wu). Upon the passing of Taizong, Wu Zetian, along with other concubines, was sent to Ganye Temple to become a Buddhist nun. A year later, the succeeding emperor, Gaozong (649–683), who had been fond of Wu Zetian since he was crown prince, went to the temple to worship. Seeing one another, the two shed tears. This reunion brought Wu Zetian back to the palace where she was first titled “Consort Chen” and then later elevated to empress consort.

Wu Zetian was gifted and talented; she was well versed in literature and history. Suffering from poor health, Emperor Gaozong entrusted many state affairs to the newly titled empress. In this way, she found great opportunities to exercise her political acumen.

After Emperor Gaozong died in 683, Wu Zetian took power. In 690, she proclaimed herself emperor and changed the name of the dynasty to Zhou.

Despite continual conflicts in the court, Wu Zetian managed to maintain social stability and national strength during her reign. When the eighty-one-year-old ruler was ill at Changsheng dian (Palace of Eternal Youth) in 705, prime minister Zhang Jianzhi (625–706), backed by the crown prince, launched a coup and besieged her residence, forcing her to abdicate.

Before she died, Wu Zetian left an edict to be promulgated posthumously requiring her to be acknowledged as empress consort instead of emperor, and for her body to be entombed at Qianling Mausoleum with her husband. Her status of empress consort restored, Wu Zetian was placed in the “imperial bed” beside Emperor Gaozong. Purportedly because it was difficult to evaluate her controversial life, a gravestone bearing no epitaph was later erected.

Among outstanding stateswomen in Chinese history, such as the Empress Dowager Cixi (1835–1908) who reigned for decades during the late Qing period, Wu Zetian was the only one who ascended the throne, and because of this she has been the subject of incessant disputes over the centuries. Though venerated during the reign of her descendants, the emperors Zhongzong (r. 683–684; 705–710), Ruizong (r. 684–690; 710–712), and Xuanzong (r. 712–756), Wu Zetian was increasingly regarded as a “curse to the state” after the An Lushan Rebellion heavily debilitated the state. In the Song dynasty (960–1279), the great scholar Ouyang Xiu (1007–1072) overtly accused Wu Zetian as villainous in his book Xin tang shu (New history of the Tang dynasty) for “taking advantage of the emperor’s authority and bringing the whole country under her after the reign of Emperor Gaozong,” and for “expelling crown princes and changing the dynasty’s name.” Such comments were echoed by the renowned Song philosopher Zhu Xi (1130–1200).

In the late Ming and early Qing period (ca. the seventeenth century), similar censure prevailed among the literati who vented their bitterness towards the newly established Qing dynasty on Wu Zetian. They said that “her crimes were so enormous that they cloaked the sky.” However, Li Zhi (1527–1602), a Ming dynasty philosopher held a distinctive opinion that Wu Zetian’s personal life and political achievements should be regarded separately. Largely approved of by modern historians, Wu Zetian is also the title role of a play written in favor of her by the famous litterateur Guo Moruo (1892–1978).