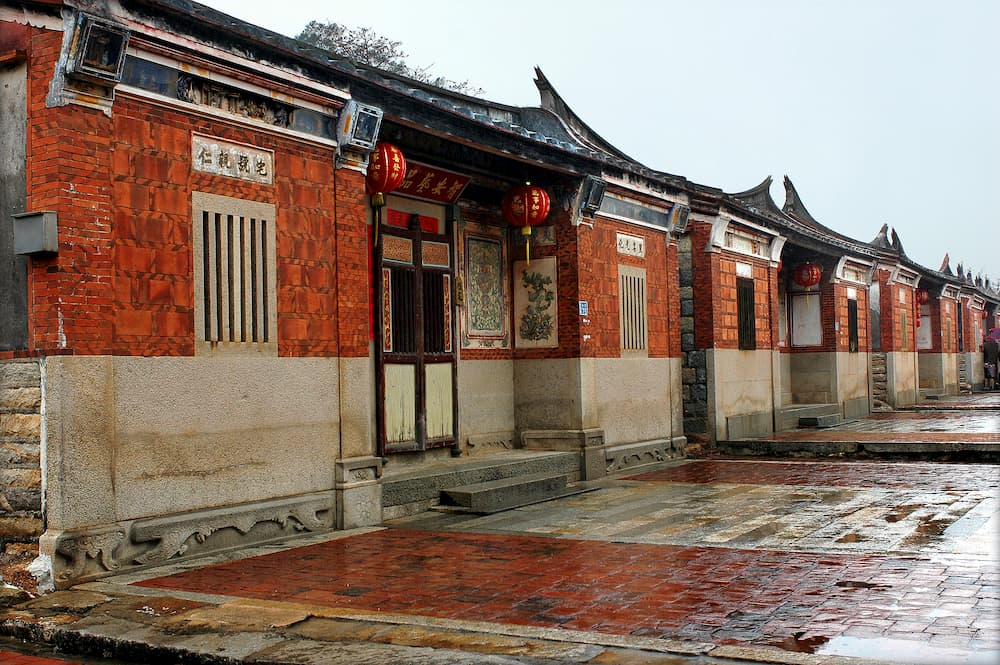 Kinmen (pinyin Jinmen), or Quemoy, refers to a group of islands located outside the Minnan Delta in southern Fujian province, on the western side of the Taiwan Strait. Facing Xiamen (Amoy) across the sea, these islands are under the jurisdiction of Jinmen county, Taiwan, which is the capital of Fujian province, Republic of China. Jinmen county consists mainly of two islands—Greater Kinmen and Lesser Kinmen. The geographical administrative regions are divided into five townships and villages: the townships of Jincheng, Jinhu, and Jinsha, and the villages of Jinning, and Lieyu.

After the Nationalist government moved to Taiwan in 1949, Kinmen became a battlefield in the struggle between the Nationalist government and the People’s Republic of China. The islands were treated as a heavily guarded gateway to Taiwan. The opening of the Kinmen-Xiamen ferry line, which was the first of the “Three Little Links” (transportation, postal, and trade links between mainland China and Taiwan), was a step into the twenty-first century. The Kinmen islands have gradually become a major tourist destination with a flourishing economy.

Kinmen has quite a few intangible cultural remains that are well preserved. During the Ming (1368–1644) and the early Qing (mid-seventeenth century) dynasties, Kinmen was a high-level administrative center. It was a fortified city where Zhu Yihai (1618–1662), King Lu of the Southern Ming kingdom, lived in seclusion during his old age; his tomb is over three hundred years old. The Regional Commander’s office of Kinmen is the only extant government office of the Qing dynasty (1644–1911) under Taiwan’s jurisdiction. Commander Qiu Lianggong’s graveyard and his mother’s memorial arch are first-level heritage sites—the former is the most well-preserved cemetery from the Qing dynasty; the latter is the largest and best-preserved archway on Taiwan’s offshore islands.

The cultural customs of southern Fujian can still be found among the residents of Kinmen. As for architecture, there are many foreign-style buildings dotting the islands. The largest concentration of old-style houses in Kinmen is near the Shuitou pier. An old-style house known as “Shuidiao getou” (water music) dates back to the Ming and Qing period and is regarded as the finest residential building among all the other private residences in the Shuitou area. Kinmen is home to the largest number of Baroque buildings anywhere in Taiwan. The “Deyue lou” (Tower of obtaining moonlight) built in 1931 was once acclaimed the tallest building with the most stories on the islands. The Western-style Chen Jinglan building, was built in 1921, by Chinese-Singaporean businessman Chen Jinglan (1881–1943) for use as his luxury mansion. During the war, it was used as a field hospital and later, it was used as holiday resort for officers and soldiers. In 1952, the Kinmen Defense Commander, Hu Lian (1907–1977), proposed renovating this building to make it look like a palace; it was also used as Kinmen’s largest elementary school, the Jinshui Elementary School.

Although the military facilities have not been used for a long time, they are popular tourist sites. The broadcast walls, with forty-eight loudspeakers, installed at Beishan and Mashan were used as propaganda-shouting tools for psychological warfare when there was active cross-strait confrontation; the Mashan observatory, known as the “first sentry post in the world,” was one of Kinmen’s strongpoints that was closest to the mainland. Other tourist attractions of former military facilities include the Jhaishan (Zhaishan) battlefield tunnel, the Jiugong battlefield tunnel, the Jincheng civil defense tunnel, and the Shishan artillery position built in 1965.

Apart from the cold and lifeless military monuments, there are many scenic sites that are worth visiting. There are any number of hills and bays across the islands. Taiwu Mountain towers above them all. Two of the “Ten Sights” of Kinmen—Sunset at Cihu Lake, and Banyan Garden are a real feast to the eyes. The Kinmen National Park—a showcase of historical development, traditional southern Fujian architecture, archive of military campaigns, and natural resources—is also a must-see.

Two products unique to Kinmen are usually on every tourist’s shopping list. One is the locally produced kaoliang (also gaoliang, or sorghum) liquor; the other are Kinmen-branded kitchen knives made from spent artillery shells.